16 Days of Activism against GBV: Engaging men to challenge the attitudes that keep violence going 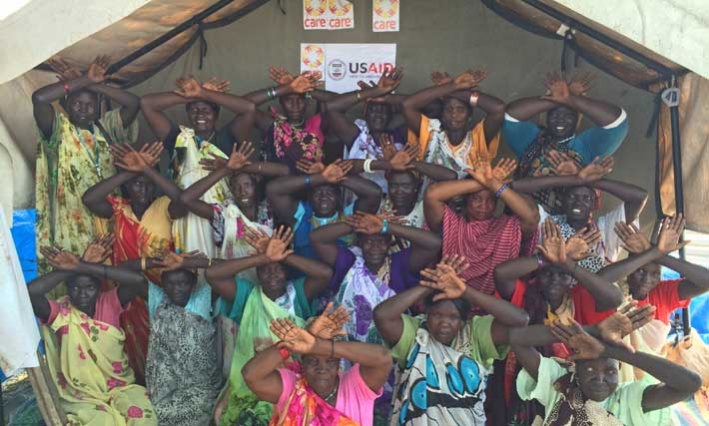 From 25 November to 10 December #16DaysofActivism, CARE country offices around the world will be joining with their partners and communities to raise voices to challenge gender-based violence. In a number of countries, men will be both a target group for activism – and activists themselves, helping to challenge the attitudes and norms that keep violence recurring.

I am currently in South Sudan, where even a civil war will not stop activists across the country from using the next 16 days to make their voices heard. Many of the voices being raised will be those of women and girls, who have been particularly affected by this conflict.

CARE’s research showed that even before the war, levels of gender-based violence (GBV) in South Sudan were extreme, with many women treated as little more than property. With the war has come an increase in the use of sexual violence as a tactic by armed groups – described by the UN Special Representative on Sexual Violence in Conflict, Zainab Hawa Bangura, as rampant and the worst she had seen in 30 years.

However, activists are not remaining silent. In Wau Shilluk, north of Malakal in Upper Nile State, an estimated 40,000 internally displaced people are living with their host communities outside of the UN protected sites (known as Protection of Civilians sites – POCs). Here CARE has been working with two newly created women’s groups to support them with coping with the effects of conflict.

After training on their rights under the law, and a discussion of the 16 days of activism, it was the women who told CARE that they wanted to organise their own activities. In the words of one, “Why should others speak for us, when we can speak for ourselves?”

“Use us to create stability”

When these women were asked what they would tell the world during these 16 days, the women told CARE, “We are human beings with rights, especially a right to security. If this was respected, we would be home right now. What we ask for now, is support while we wait for peace, engage with us and use us to create stability.”

Over the next two weeks, the two groups are organising marches, cultural activities and discussion groups, all behind the themes of No to War, No to GBV, and Yes to Education.

One theme that connects the voices in South Sudan with others around the world is the focus of the 16 days on challenging attitudes that see GBV as normal or acceptable. Key to doing this is engaging men and boys in the conversation, and even seeking male champions to challenge destructive ideas, such as the attitude that real men use violence against their female partners.

In Wau Shilluk, one of the discussion groups will be for men, to get them to consider how they can be part of the solution of ending GBV and the war. In the Democratic Republic of Congo, CARE and our partners are focusing a whole series of events on challenging destructive masculinities: street theatre to open up questions of gender to the wider public; radio broadcasts; discussions followed by football matches between young men just starting to engage in a new project, Sisi Vijana (Young Men), which encourages them to be role models in changing attitudes on gender and behaviour towards both men and women.

Time for the politics to catch up?

At the regional level, CARE is one of a number of agencies pressuring governments in the Great Lakes to make progress on their commitments to ending GBV as articulated in the ICGLR Kampala Declaration of 2011. In the coming weeks ISIS-WICCE, with support from CARE, will launch a report noting the progress each of the 12 signatory countries have made, and identifying gaps.

One gap that will not be covered because it was absent from the original text is how well governments are doing engaging with men and boys either as victims, perpetrators or allies. Perhaps we have come a long way in four years, but it seems that now would be a great time for political leaders around the world to start addressing the attitudes among men that drive GBV, both in their words and their deeds.

More in this category: « Is peer-to-peer lending an efficient way to support microfinance – and to achieve development objectives? Making the most of a flawed opportunity – a response to MSF’s withdrawal from the World Humanitarian Summit and CARE’s stance »