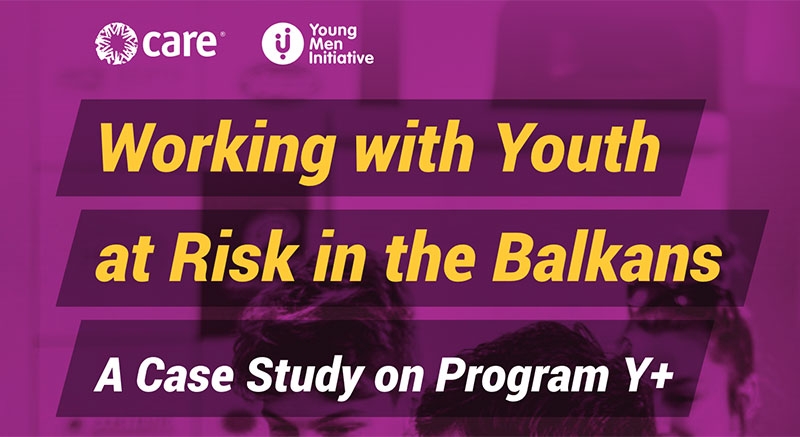 As the USA inaugurates a new president in an atmosphere of heightened security in the wake of shocking violence at the Capitol earlier this month, the partners CARE works with in Albania, Bosnia and Herzegovina, Croatia, Kosovo, and Serbia are celebrating some of the successes they have had running programmes to counter violent extremism, especially with young men.

I had the enormous privilege of meeting a staff member from one of these local partners a few years ago when he was in Atlanta for a workshop. I’ll never forget how he skipped lunch to walk to the Martin Luther King Jr. memorial to see the celebration of a man who inspired him and the work he was doing. Now it’s time for us to be inspired by the work he and his friends and colleagues are doing.

10 partner organisations from 8 cities worked with CARE’s support to reach more than 720,000 people in 140 different municipalities. The project has been running since 2006 and started adding a component on countering violent extremism in 2019 because they saw the environment changing. This new work focused on youth at risk, out-of-school youth, young people in juvenile detention, and unemployed youth.

Some of the partners that worked with CARE on this project are Act For Society (Albania), Perpetuum Mobile (PM) and the Center for Social Work (CSW) (Bosnia and Herzegovina), Status M (Croatia), SIT (Kosovo), and Center E8 (Serbia).

What has changed so far?

In Croatia, project trainers noticed, “[youth] learned that it is racism when you insult Roma people because of their ethnic origin. At the end of project activities, non-Roma and Roma young men started sitting together, they even started hugging and became close friends, while at the beginning they were completely distanced.”

Participants were willing to openly show their emotions. For example, most of them actually prepared poetry or love songs, which they read out during workshops. They were not embarrassed, which was unusual for youth at their age. One young woman said, “I learned a lot about expressing emotions. I became more open to others and I regard everyone as equal.”

Young people are thinking about the issues

After a play put on by local partners, one young woman said, “The part of the play that shook me was the part where actors give examples from their own lives, from the past when they had prejudices about moments during which they were some sort of mini-extremists.”

There is “a change in the mentality of the parents, they are less strict and more open-minded.”

How did it happen?

Young people started getting interested when they realised that it is “something different, something about their personal life… they saw it as something fun, and they started coming,” according to one project coordinator. Teams used theatre, podcasts, social media, and other ways to get young people involved in the conversation.

Describing how they had to adapt, one person said: “We had to use a totally different language and since it was a Muslim community, we had to use different terms… we had to be careful not to insult anyone.”

Summer break programmes, after-school clubs, a conference with war veterans — these were all ways to keep the conversation rolling, and keep young people engaged.

Teams did research on what was working and shared it with local researchers and NGOs.

According to one young man, “The biggest change that has happened within the programme is that the educators have made me think about some topics.” Another one said, “They managed to get an answer from us to something that we didn’t even know we knew; in that way they motivate you to actually voice your opinion.” One facilitator said, “[young people] found it unusual that someone cared what they thought about something.”

While there were some common themes and standards, each partner had significant freedom to decide how they wanted to implement the work, and what would be most effective in their own contexts.

The teams would examine extremist messaging that young people were exposed to (for example, promoting violence against an ethnic minority) and then develop videos, plays, and social media messages that showed those groups of people working together and having meaningful friendships.

Check out the case study and the Young Men Initiative project website.