Home // Development Blog // A call to action on gender and humanitarian reform: What happened at the high-level review at the UN General Assembly of the Call to Action?

A call to action on gender and humanitarian reform: What happened at the high-level review at the UN General Assembly of the Call to Action? 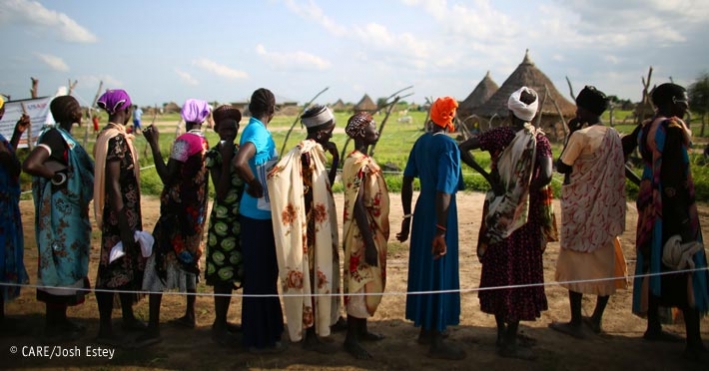 Women queuing at a CARE seed distribution event in Jonglei, one of the areas in South Sudan most affected by the conflict © Josh Estey/CARE

Yesterday (22 September 2014) at the UN General Assembly in New York, John Kerry, US Secretary of State, convened a ministerial meeting to review progress on the Call to Action on Violence Against Women and Girls in Emergencies. What were the highlights and key points? And what needs to happen to get the Call to Action out of the ‘gender silo’ and into the heart of wider humanitarian reforms ahead of the World Humanitarian Summit in 2016?

Kerry announced that the US would pilot a new ‘Real Time Accountability Partnership’ in two countries to track progress in real time on keeping communities safer when disasters or conflict strike. In addition, linked to the US government’s ‘Safe from the Start’ bilateral package of policy and funding to support implementation of the Call to Action, an additional 12 million dollars will be allocated for innovation and training in aid agencies to dispatch experts in gender-based violence at the onset of crises (bringing the total US committed funding for Safe from the Start to more than $22 million). If, moving forward, the process can mobilise other donors and aid agencies to translate the global commitments in the Call to Action communique into what they actually do, then that will be a huge success.

Ways forward? From the Call to Action to the World Humanitarian Summit in 2016

So – great that we have a Call to Action. Great that Kerry, Greening and other senior politicians restated their commitment to what Kerry called “a global coalition that rejects gender-based violence as a by-product of war, conflict, or natural disaster.” But what next?

Yesterday’s event was an important moment to demonstrate sustained political leadership and support for the process, but a range of questions remain unresolved over ways forward on the Call to Action. How will different stakeholders – governments, UN agencies, NGOs – be held accountable for the commitments made? How will the global commitments in the communique be translated into the policies, funding and operations of different agencies involved? How will donors, UN and NGOs bring GBV into the key moments when they come together to assess humanitarian needs, decide levels of funding for different programmes, and monitor and evaluate the emergency response?

A key moment towards this end will be a workshop which is due to be convened later this year, with support from the US government and UN agencies, to work through these technical, but critically important questions.

To coincide with yesterday’s event, CARE published a new policy paper outlining detailed recommendations on how to translate the political commitments into practical steps at all levels of the humanitarian system. Key steps for the Call to Action must include:

Read CARE International’s paper A call to action on gender and humanitarian reform for more ideas on how to take this agenda forward. The humanitarian sector has far to go on gender, and the time to start is now.

More in this category: « Despite the IPCC's bad news, it's not too late to act on climate change The three most common misconceptions about business and human rights »