Azraq refugee camp, four years after it opened: The view from a CARE trustee 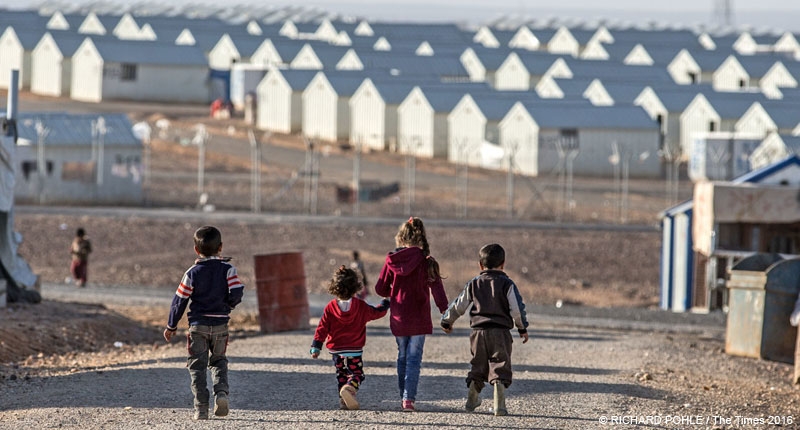 Nadine Nohr is a Trustee of CARE International UK.

Sitting in a board meeting in central London it is sometimes hard to grasp the day-to-day reality of CARE International programmes, particularly for those of us like myself not from the sector. Which was one of the reasons why the opportunity to witness first-hand the work that CARE does in the field felt like one not to be missed.

Visiting Azraq refugee camp was a humbling experience from the start. After driving 100km east from Jordan’s capital Amman, mainly through desert, we arrived at the camp – which is the size of a small English city, but surrounded in places by fencing and with strict security measures for both entering and leaving.

The statistics are bleak: a population of 55,000 people of whom nearly 60% are children. And the site is growing, with potential to increase its capacity to 130,000.

In a landscape of browns and greys, the occasional burst of colour inside the camp made a real impact. Surrounded by desert, the rows of plasterboard and corrugated iron dwellings – which we were told are extremely cold in winter and hot in summer – contrasted strongly with the brightly coloured plastic children’s chairs in the crèche, the paintings by some of the refugees taking part in an art project, and the multi-coloured mural outside one of CARE’s community centres.

Another boost was witnessing the commitment, energy and dedication of the team we met in the camp (as well as those in the country office and day centre we visited in Amman) working to deliver programmes in such a politically complex and challenging environment.

Perhaps the overwhelming question for many of us was how do you create a meaningful existence for people living in this strange parallel universe? When the camp was first opened, it was intended to be transitory, yet it is now marking its fourth anniversary. Some children born in the camp have never known life outside it.

Traditional roles have been altered. Women make up a large proportion of the camp population, and many who previously would not have been allowed to work are now going out to train or find jobs. For some this isn’t possible, so we had some practical questions, like: can more training be provided from the home with support from a digital delivery partner? or, how can we better address the needs of disabled people? (A colleague had an idea for a windup radio after talking with a blind refugee barely able to go out.)

My visit to Azraq, despite the limitations in terms of language and cultural barriers and time constraints – of impressions formed from the small number of people we met, with so many human stories not yet heard – was nevertheless incredibly powerful in putting a human face to this terrible conflict. It was clear that the dedicated CARE staff we met took care not to see Azraq’s people as victims and to ensure they involved and included Azraq’s residents in all their decision-making.

My trip raised other questions too. How can we play our part in continuing to communicate the realities of life as a refugee? And how do people cope with the uncertainty of not knowing when it will be safe to return home and how, after their experiences, they will adapt when they do?

Aleppo, Raqqa, Homs – these are names of places that have become synonymous with unspeakable and seemingly unending terror and tragedy. Yet for many of the people we met at the camp these places are their real home and their abiding wish is to return one day.

Visiting Azraq provided a window onto the tremendous complexity of the crisis in the region and the work CARE is doing to support people there. It also helped to breathe life into those reports we receive in our meetings in London, and will hopefully contribute to our ability to be more effective in supporting CARE International UK’s work in this region and elsewhere, and in particular in considering the challenges posed by this complex crisis – questions like:

I joined the Board of Trustees of CARE International UK in September 2016.

I have worked in international programme distribution and investment for the last 30 years with broadcasters and producers around the world. My work involves raising production finance for the production of television programmes and exporting them internationally. I have run a number of global distribution businesses including for ITV and the Shine Group working with series like Masterchef, the Bridge and Broadchurch. I currently operate as an independent media consultant providing strategic and commercial advice to producers, broadcasters and distributors.

I have been involved in the voluntary sector for the last 12 years including chairing the board of an international child rights charity (Everychild). I joined the board of CARE International UK in 2016 and since January 2018 am chair of the Risk and Ethics committee.

The Handmaid’s Tale. This adaptation of Margaret Atwood’s dystopian novel has been the best thing I have seen in the last couple of years. Incredibly prescient of, amongst other things, the refugee crisis, the Trump administration, sexual inequality and the #MeToo movement, and moreover brilliantly produced and performed!

More in this category: « Global Findex shows 1.2bn increase in people with bank accounts – but where are the women? 5 Minute Inspiration: The Power of Savings Groups in West Africa »