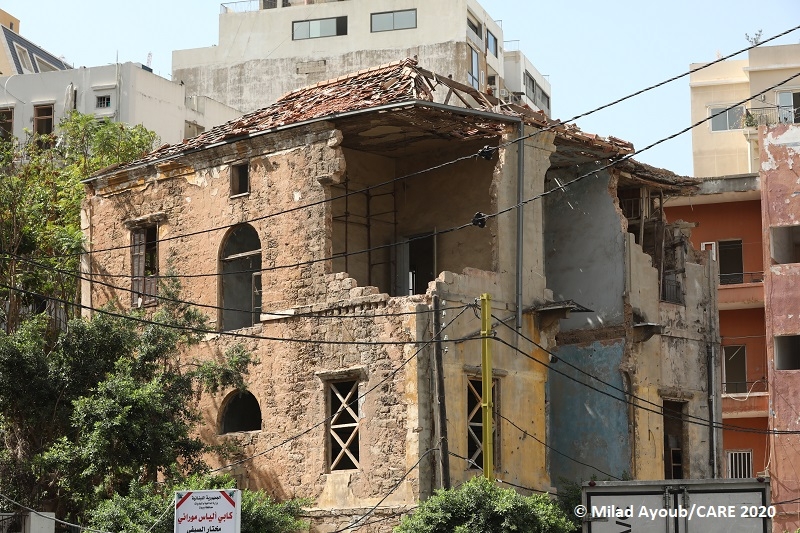 On 4th August 2020, one of the biggest non-nuclear explosions in history devastated large parts of the Lebanese capital. At least 200 people lost their lives, over 300,000 were left homeless and the blast caused an estimated US$15 billion in damage. Three months on, CARE’s Emergency Shelter Advisor – one of the first CARE staff to deploy during the global pandemic – shares five lessons on responding to a complex crisis in the time of COVID-19.

Even before the explosion, Lebanon was facing its worst political, economic and financial crisis since its civil war. Years of political turmoil have led to dramatic inflation, currency depreciation, food insecurity, electricity shortages and widespread unemployment. The ongoing Syrian refugee crisis and, most recently the global COVID-19 pandemic, have only compounded these interrelated crises. Then, the August 4 port explosion dramatically increased the urgency and complexity of the situation. So, what have we learned from the initial response to the blast?

1. Communities are always the ‘first responders’

Local residents immediately took to the streets to pick up the pieces. While the Government and international NGOs were relatively slow to act, in an extraordinary show of solidarity, thousands of volunteers from all over Lebanon mobilised to offer shelter and aid to those in need. In particular, young people led and continue to lead this huge volunteer effort. Local people are often the first to act and will continue to rebuild long after others have left. Building on local people’s own priorities, decisions and actions, as well as the work of local NGOs and grassroot organisations, is at the core of CARE’s Emergency Shelter approach. Learn more about supporting self-recovery here, as CARE works to improve humanitarian shelter response and better support local communities.

2. The housing needs are urgent and complex

The type of damage was unique, like the impact of a hurricane and earthquake combined: windows, doors and even surrounding walls were blown out by the force of the blast, and many buildings also lost their roofs or collapsed completely. More than 300,000 people fled damaged homes, sleeping in the open or temporarily staying with friends, family and even strangers. The severe economic crisis means that costs are seven times the normal rate, tenants are struggling to pay rent, and landlords do not have the money to afford repairs. Simply replacing one or two panes of glass costs over USD$1,000 – far more than most families can afford – with structural repairs costing more than USD$15,000. Many apartments in Gemmayze ad Mar Mikael are heritage buildings, which are very expensive to rehabilitate, and some tenants have lived there on low, fixed rates for years. CARE’s shelter response must be tailored to these diverse needs and, with winter approaching, CARE estimates that 95% of the shelter needs are still unmet.

3. Rapid deployment during the pandemic is not only possible, it’s more important than ever

CARE International Lebanon responded immediately to the blast with hot food packages and hygiene kits. Emergency shelter was identified as an urgent priority. A complex emergency of this kind requires a nuanced understanding of the situation on the ground, and extra technical support, particularly when dedicated and passionate local staff are already responding to compound crises, adapting to life under COVID-19, and directly affected by the blast. Within days, CARE’s Emergency Shelter Advisor, Amelia Rule, deployed to Beirut. This was CARE’s first international deployment since the start of the pandemic and was facilitated with funding from the People’s Postcode Lottery. Following enhanced needs and risk assessments, as well as COVID-19 testing and quarantining on arrival, Amelia arrived in Beirut to provide additional emergency shelter expertise and hands-on support.

4. Rebuilding Beirut must be a locally led response

Rebuilding the city could take years, which is why it’s important to have local teams and partners in place with the expertise to lead the emergency response, as well as longer-term efforts to rebuild. As a priority, Amelia supported the recruitment of a strong shelter team of qualified project managers, coordinators and engineers to build local partnerships and design the shelter programme. CARE is proud to have our first all-female shelter team, role-modelling women’s leadership in crises. CARE has also partnered with local NGOs Nusaned and Anera to prioritise the most vulnerable households: carrying out minor repairs to their damaged homes through local contractors, giving cash grants to families to carry out repairs or cover rent for those most at risk of eviction; and providing referrals for legal advice where needed. Longer-term, communal areas such as stairwells and roofs will be rehabilitated, improving residential buildings for all the inhabitants.

Millions of dollars were raised for Beirut by mobilising a national and international community of supporters – especially Lebanese diaspora. Social media has played a huge role in the emergency response. People used personal accounts to post images and video footage of the damage, and to crowdsource funds through platforms like Impact Lebanon and Live Love Beirut. By contrast, international NGOs largely reliant on more traditional fundraising methods, fell behind the local response before being able to respond at scale. The aid sector should reflect on how best to support localised action mobilised through social media, ensuring that aid reaches the most vulnerable, with accountability and longer-term impact. CARE Lebanon, for example, aims to increase its work directly with local partners and is exploring funding platforms that connect global donors directly to locally led projects and organisations.

What can you do?

I am part of CARE’s Humanitarian Technical Team and deploy specifically in emergencies to support shelter programmes, providing assistance to people who have lost their homes in a natural disaster, conflict or crisis. I have a background in the built environment and urban shelter and settlements, training as an architect in London before I started to work in the emergency shelter sector in 2009. Initially working for the UK Government’s Department for International Development (DFID), then the British Red Cross, my work has focused on urban post-disaster recovery and community resilience through participatory programming.

At CARE I am especially interested in good shelter programming with a focus on gender, incorporating activities which address gender inequalities and GBV mitigation directly into projects. I have supported shelter projects in various countries including Lebanon, Nepal and Haiti. I lead on developing good practice guidance in gender and shelter, as well as a toolkit which aims to address gender-based violence mitigation in shelter programming. These tools have been adopted by other shelter advisors and supported by the Shelter Cluster. Our approach to providing assistance focuses on supporting families to recover their shelter and lives in the way they choose, through self-recovery. CARE aims to build on families’ own capacities and encourages better construction and better shelter through achievable changes in practice and behaviour. Shelter is not necessarily about providing a complete home, even small improvements can make a big difference to people’s safety.

A book I constantly refer back to in my work is Small change by Nabeel Hamdi which demonstrates the power of small changes that have huge positive effects in development settings.

More in this category: « The importance of a faith-inclusive approach to development 5 minute inspiration: What are we learning from COVID-19? »