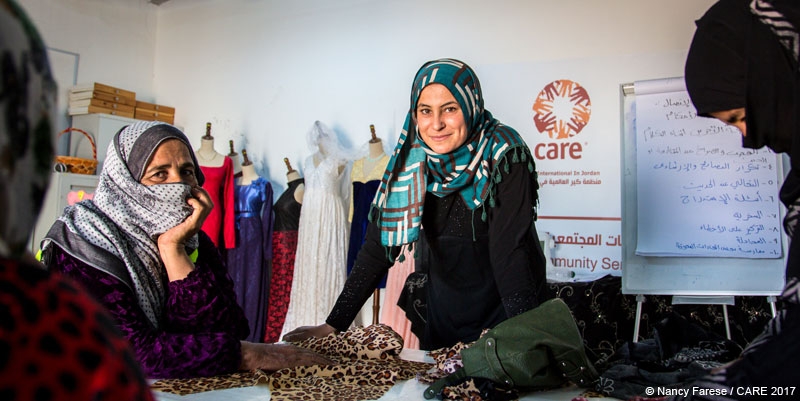 Continuing to protect and support Syrian refugees, and displaced women and girls in particular, is crucial, writes Nirvana Shawky, CARE Regional Director for MENA. But we also need to help them prepare for a future in which they access jobs – the only sustainable option for millions of displaced people, regardless of whether they return home, continue to live in exile or are re-settled.

For the third year in a row, the European Union and the United Nations will co-host the Brussels conference on ‘Supporting the Future of Syria and the Region’. I will attend for the first time as the Regional Director for CARE in the MENA region. The conference takes place just before we, regrettably, mark the 8th year anniversary of the outbreak of conflict in Syria – a civil war that continues to ravage the country and has created the largest displacement crisis in the world. The word ‘anniversary’ seems sadly out of place here, as I normally associate it with something positive and worth celebrating – not a people’s tragedy that continues to this day.

The effects of this crisis will last for generations

The effects of the Syria crisis will last for generations across the Middle East region. There are now some 5.6 million Syrian refugees registered with UNHCR – over 3.5 million in Turkey alone; nearly 1 million in Lebanon; over 650,00 in Jordan; over 250,000 in Iraq; and more than 100,000 in Egypt. Along with unregistered refugees, the total number of Syrians forced to flee violent conflict and live in these countries is likely around 7.2 million – that is the equivalent of a medium-sized European country.

How do we understand such massive numbers without losing track of the fact that each number is a person – numbers combine to make up families, and larger numbers still form the majority of entire communities, towns and cities that were forced to flee? How do we make sure the voices of the most vulnerable, particularly women and girls, are not drowned out by politics and conflict when their futures are decided?

The protracted displacement of millions of people is unsustainable

A protracted displacement at this scale is unsustainable. It is unsustainable for donors, hosting communities and the refugees themselves. All of the talk at the political level, and increasingly in the aid and development community, is understandably about the long-term future of the Syrian people.

Western countries and the UN are pushing Syria and its allies to participate in the so-called Geneva Process – that purported to give Syrians free and fair elections and a non-sectarian transitional government. Russia, Turkey, Iran and the Government of Syria are now focusing talks on an alternative Astana process, focused on ‘de-escalation’ between combatants and their proxy combatants, along with the formation of a constitutional committee and elections.

Western donors and others from the Gulf region and elsewhere link their willingness to contribute to the reconstruction of Syria to political reform and agreement. The damage to infrastructure alone in Syria is estimated to be US$288 billion by the UN, and reconstruction will take years. We are at an impasse – the fate of millions in the region is dependent on a constructive and fair political agreement that seems far away for many Syrian people.

Now is not the time for Syrian refugees to return

Where does that leave the Syrian refugee population and where will they end up living? Back home in Syria? As refugees in the region? Or further afield – for that tiny percentage that are resettled in Europe and elsewhere?

Whilst political machinations unfold, it is crucially important that we do not lose sight of our responsibilities to refugees who are trapped in lives not of their own choosing.

The time for the return of large numbers of refugees to their homeland, unfortunately, is not now. Syria does not have the capacity and will to protect and provide for them. Returning people face a host of challenges and threats – everything from unsafe drinking water, unexploded remnants of war, limited livelihoods opportunities to arbitrary arrest, detention and forced conscription to the army. There are over 6 million Syrians who are internally displaced and around 11 million people with humanitarian needs.

Refugees have restricted opportunities to work and provide for themselves. This leaves them dependent on aid. Yet, in spite of conditions in Syria not being safe for them to go back, support from the international community and host governments seems set to fall.

We used to assume that this would force the most vulnerable refugees back to Syria – a so-called ‘push factor’. According to a recent analysis by the World Bank, we were wrong – peoples’ fears of what awaits them in Syria are so strong that they simply decide to remain as refugees; struggling more with less; facing greater exploitation and risks.

The generosity of the governments hosting these huge numbers of refugees is under strain. Syrian people and their families have the right to be protected until they make a decision themselves to return home – a decision that is safe, voluntary and dignified. They know very well what is best for themselves and we need to support them, as is our obligation under international law.

Women and girls are the most vulnerable

The economic and social pressures of being a refugee fall harder on women and girls. They are a key concern for CARE, as we look to supporting a future of their own choosing. For CARE in the region, our long-term strategy for the Syria crisis is designed for these groups and it is built on two pillars:

CARE’s programming in Egypt, Lebanon, Jordan and Turkey supports families in accessing emergency healthcare, paying overdue rent to avoid imminent eviction and schooling for their children. CARE’s staff have provided support in many cases of both early and forced marriage – a common negative coping mechanism among refugees who find themselves unable to afford living costs and service debts to landlords and shop owners. CARE also works to ensure the rights of refugee women and young girls to access Sexual and Reproductive Health and Rights (SRHR). This type of intervention is largely forgotten or given undue support in my experience in many humanitarian contexts to this day.

Supporting people’s capacity to help themselves

CARE’s programmes do not see vulnerable and marginalised refugees as passive recipients of aid. Syrian refugees should not be crudely characterised as burdensome and parasitic in their effects on the economies in host communities. Syrians have proven themselves to be highly innovative, hard-working and independent, in spite of the challenges they face as refugees. They are consumers, employees, manufacturers, entrepreneurs, business owners and customers – they are both a key element of the market and the market place. We need to harness their capabilities to help themselves. Vocational training in CARE is also market-oriented to ensure its applicability in regular employment.

For refugees, the local market in their country of exile determines programming for the most part. Increasingly, we are also working to understand the needs of the market back in Syria, to ensure vocational learning is highly transferable to support their future in their homeland. CARE’s life-skills programmes throughout the region offer Syrians and vulnerable host communities basic literacy and numeracy; soft leadership skills for women, along with computer skills; foreign language learning – all focused on women and youth.

Promoting economic empowerment is the only sustainable option

CARE’s programmes maximise the positive social and economic impact of Syrians in host communities through the development of Micro, Small and Medium Enterprises (MSMEs), including informal and formal enterprises; cooperatives; Village Savings and Loan Associations (VSLAs). This work requires the permissions of the host governments whose approach varies from country to country in the region. To maximise social cohesion, CARE also targets host communities with its economic empowerment interventions to generate new livelihood opportunities (business growth, new jobs, etc.). It supports enterprises between displaced and host communities that bolster common interests and reduce refugee feelings of isolation and of being outside of communities.

So, I travel to Brussels with some key messages to offer – that whilst protecting Syrian refugees, displaced women and girls in particular, is crucial and we will continue this endeavour, helping to prepare them for a future in which they access jobs is the only sustainable option – whether they return home, continue to live in exile or are re-settled.

We must listen to what Syrians say they want

Beyond this, the politicians on all sides need to compromise, rise above sectarian or political motivations and realise that the future of a nation is at stake. A political agreement is needed, so early recovery can go hand-in-hand with proactive support for Syrian refugees to return home – in a safe, voluntary and dignified manner. That is what Syrians tell me they want and we should listen to them.

Nirvana Shawky is the Regional Director for CARE’s Middle East and North Africa Region. She joined CARE in 2018 after spending 8 years at Crisis Action, most recently as International Partnerships and Middle East and North Africa Director based in Egypt and Lebanon. As regional expert on advocacy in conflicts, she has led effective global efforts on the protection of civilians in humanitarian crises in the Middle East, including advocacy campaigns lobbying governments and international institutions on crises in Lebanon, Libya, Palestine, Sudan, Syria, Western Sahara and Yemen.

Before joining Crisis Action, she played an integral role in the establishment of Al Shorouk (an Egyptian independent daily newspaper) as their opinion page editor. Prior to that, Ms Shawky was the English section editor and political analyst in Al Ahram Democracy Review, a regional periodical dedicated to democratisation, governance, and political development. She also worked as a researcher for Al Ahram Center for Political and Strategic Studies, and as an academic lecturer on issues of international relations of the Middle East, humanitarianism and protection of civilians, and regional institutions role in peace and security. Nirvana studied political science and international relations at the American University in Cairo and University of California, Los Angeles (UCLA) and is an alumnus of Geneva Centre for Security Policy (GCSP), Center for Security Studies - ETH Zurich and Rockwood Leadership Institute, California. In addition, she is currently a board member at the Arab Forum for Alternatives, a leading independent think tank in the Arab world.

More in this category: « International Women's Day: Avon, Diageo, M&S and Unilever join CARE in calling for a strong and inclusive ILO Convention How peer-to-peer lending is helping to provide social microfinance to thousands of Zimbabwean women »