Climate change and women and girls on the frontlines 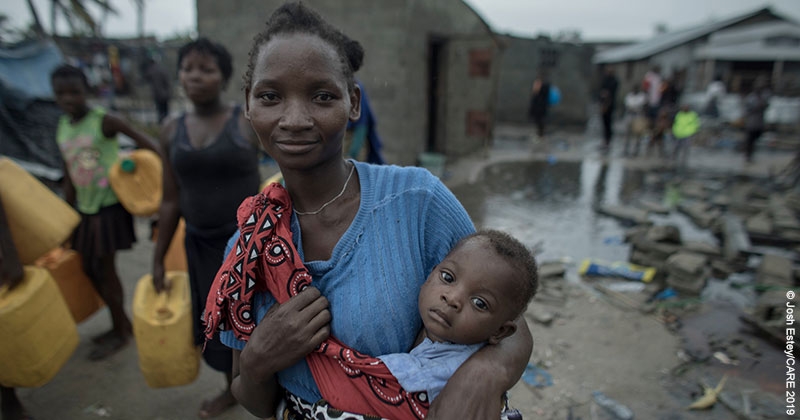 I have been part of rapid response teams deploying to typhoons, cyclones and floods in Asia and droughts in East and Southern Africa and worked on emergency responses for 15 years. Each time, I’ve seen first-hand how around the world, women and girls are all too often on the frontlines of the climate emergency.

This isn’t just about women and girls’ ability to survive disasters, but it is also about women facing so many barriers that hinder them from being able to prepare for hazards and be resilient to withstand future shocks. Many of these barriers stem from pre-existing cultural norms, laws and deeply engrained gender inequality.

Over 15 years ago, when the Indian Ocean Tsunami swept across Southeast Asia on Boxing Day, more than 220,000 people were killed in 12 countries and 1.6 million people were left homeless. A study conducted by Oxfam in 2005 stated that four times as many women than men were killed across Indonesia, Sri Lanka and India during this devastating event. According to this study, some of the reasons for this are similar across the countries affected – many women died because they stayed behind to look for their children and other relatives.

In addition, cultural norms and modesty meant that women and girls in these affected areas often couldn’t swim or climb trees, reducing chances of women and girls saving themselves. In my own Sri Lankan family, only a handful of my older female relatives living in Sri Lanka know how to swim. Sadly, gendered roles also played a part in the disproportionate death toll. Storm surges and flooding continue to be the norm and this issue will only grow as a result of climate change.

These pre-existing inequalities and cultural norms are further exacerbated when other factors such as caste, clans, poverty and disabilities are combined.

In Somalia, the number of the internally displaced population has steadily increased over the years. Conflict, droughts and floods have reduced coping mechanisms of vulnerable communities. Tensions between farmers and nomadic herders have continued to increase as climate change heightens cyclical droughts and flood conditions. This has caused thousands of people to arrive in Mogadishu, Somalia’s capital, in search of livelihood opportunities and women are once again at the frontlines.

When I visited some of these camps and settlements in March 2015, the women I met shared how they live at the whim of private landowners. Forced evictions were the norm. As I walked through these camps, homes were cloth and plastic sheeting strung together with very little privacy and protection for women and girls. Whether camps in Mogadishu or camps in other countries such as South Sudan, women who go out in search of food, firewood and casual jobs are at risk of sexual and gender-based violence.

Nearly a year ago, Cyclone Idai made landfall in Mozambique, leaving nearly 3 million people in need across Mozambique, Malawi, and Zimbabwe. Cyclone Idai has been described as one of the worst weather-related disasters on record in the southern hemisphere. I visited Mozambique in July last year and talked to female farmers who were struggling to see how they could recover from the devastation. These women talked about how flooding after Cyclone Idai left their land submerged in water for days, destroying their crops and washing away agricultural tools.

These subsistence farmers had taken out loans to farm their land, so they now have outstanding loans and limited prospects of paying them off. Studies show that women account for nearly half of the world’s smallholder farmers and produce 70% of Africa's food, yet less than 20% of land in the world is owned by women. The climate emergency could see many of these women smallholder farmers’ precarious livelihoods destroyed by increased cyclical flooding and droughts, creating catastrophic effects for them and the whole continent.

Over the years I have seen increased attention given to meaningful participation of women and girls in humanitarian programming and aid agencies trying to create space so that women have a seat at the decision-makers’ table. Much more needs to be done on this in the humanitarian sector, but even more needs to be done to address the structural, cultural and legal barriers that make women and girls around the world particularly vulnerable to the effects of the climate emergency.

CARE is calling for gender justice and climate justice and has launched a petition urging the UK government, as host of the COP26 UN climate talks, to:

Madara Hettiarachchi is Director of Programmes & Accountability at the Disasters Emergency Committee (DEC).

More in this category: « What we’ve learned about adaptive management from our Somalia education programming Ending workplace violence and harassment – significant progress but no time to rest on our laurels »