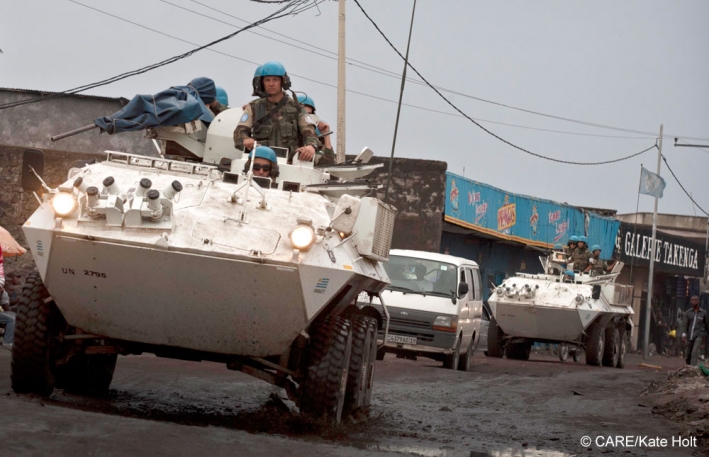 CARE International is holding two public events on Wednesday 11 June 2014 at the Global Summit on Ending Sexual Violence in Conflict in London - find out what they are about and who's speaking, and please come along and join us on the day.

Download the CARE International media briefing on the Global Summit

When the soldiers come home

Laura Bates, founder of the Everyday Sexism Project, asks experts from the UK, Rwanda and the Balkans what happens when the trauma of war moves from the front line to the family, and explores how to work with men and boys to combat the cycle of violence when war ends.

Laura Bates (Chair) is a journalist, campaigner and founder of the Everyday Sexism Project. Her book Everyday Sexism was published in April 2014 and she is on the 2014 BBC Woman's Hour Power List of the "top ten game changers operating in the UK today".

Dr Walter Busuttil is a Consultant Psychiatrist and Medical Director for Combat Stress, the UK's leading mental health charity for combat veterans. He served in the RAF for 16 years and has been working in the field of post-traumatic stress disorder since 1988.

Saša Ostojić is a member of the UN Secretary-General’s Network of Men Leaders and coordinator in the North-West Balkans of the Young Men Initiative for preventing gender-based violence. He was formerly a high school participant in the Young Men Initiative during its early stages - read about his experiences in his blog Why I #challengeattitudes in the Balkans.

Edouard Munyamaliza is Executive Secretary of the Rwanda Men's Resource Centre (RWAMREC), a CARE partner organisation that has been promoting positive forms of masculinities in Rwanda and engaging men in ending gender-based violence since 2006. He is also a commissioner in the National Unity and Reconciliation Committee promoting peacebuilding in Rwanda, and is chair of the Rwanda Civil Society Platform.

Catherine Russell (Welcome) is US Ambassador at Large for Global Women’s Issues. Prior to her appointment in August 2013, she was Deputy Assistant to the President. During her tenure at the White House, she co-ordinated the development of the US government's strategy to prevent and respond to gender-based violence globally. She previously served as a Senior Advisor to the Senate Foreign Relations Committee on international women’s issues.

Sofía Sprechmann (Chair) is CARE International’s Programme Director, responsible for leading CARE’s programme strategy and its implementation worldwide. She has extensive experience in addressing gender inequality, having worked alongside some of the most discriminated-against women, such as domestic workers, women working in the garment sector and victims of gender-based violence.

Dr Gary Barker is International Director of Promundo-DC, the US office of Instituto Promundo, a Brazilian NGO that works in Brazil and internationally to promote gender equity and to reduce violence against children, women and youth. He has served as a consultant to UN agencies, the World Bank, and others. He has carried out research on men, violence, gender, health and conflict in Latin America, sub-Saharan Africa and Asia, and co-authored numerous training materials, including the Program H series for working with young men to promote gender equality and reduce violence against women.

Innocent Zahinda, a national of the Democratic Republic of Congo, is currently leader of the United Nations Team of Experts on the Rule of Law and Sexual Violence in Conflict based in New York. He has over 20 years’ experience in human rights monitoring and reporting. Among other roles, he has worked as Representative of the UN Office of the High Commissioner for Human Rights in Chad, and Head of the UN Human Rights Office in West and in Southern Darfur.

John Crownover is CARE International’s programme advisor on the Young Men Initiative in the Balkans, working in Serbia, Macedonia, Kosovo, Montenegro, Albania, Bosnia and Herzegovina, and Croatia. He has been involved in civil society development and peacebuilding in the Balkans for over 17 years, focusing on youth development (particularly dealing with violence and conflict), gender inequality and gender-based violence.

Stephenie Foster is Senior Advisor at the Office of Global Women’s Issues, US Department of State. She previously served at the US Embassy in Kabul, Afghanistan, focusing on women and civil society. She has over 25 years' experience in policy advocacy, government affairs, programme development and training, and law, with an emphasis on the critical role that women play in advancing public policy and development.

More in this category: « Progress in tackling global food insecurity is welcome but not the whole story The mathematics of crisis: Adding up the facts for action in the face of famine »