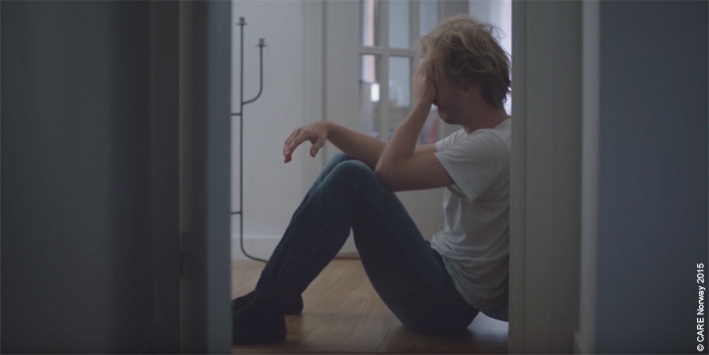 A still from the Dear Daddy video

When a charity video starts to go viral you know something is up. As part of its contribution to the 16 Days of Activism against Gender-Based Violence, CARE Norway’s Dear Daddy film packs an emotional punch, and makes no apologies for dividing opinions.

Although clearly aimed at an archetypal Norwegian man (cross-country skiing on the weekends, anyone?) the message has resonated much further, with the English version getting 7 million (and counting) Youtube views. The film sees an unborn child asking her father to take action to make the world a safer place for her to grow up in.

When I first saw it in Oslo during the 16 Days campaign, more than a few of us were moved to tears. Ironically, being at a conference on engaging men in the fight for gender equality did not make crying in public any less embarrassing. Perhaps it hit me because I’m the father of a two-year-old girl. It made me think how much more we need to change as a society if we are going to tackle the deep-rooted attitudes that normalise the unequal treatment of people based on their gender, and particularly the casual sexism that ultimately leads to violence.

The video was a 5-minute insight into the reality that my daughter will face when, as a teenager, she goes out alone into a culture that is fundamentally still a more threatening place for women than men. The film also made me realise how passive inaction about gender inequality is the easy route for men like myself. As Michael Kimmel says, the biggest affirmative action programme in the history of the world has been for white men in Europe and North America: it’s called the history of the world...

A lot has changed over the last 20 years since I left school, but perhaps one of the clearer signs of progress is how many men are calling themselves feminists and becoming allies in the movement for gender equality. Changing history sounds exhausting, so to achieve full gender equality is going to take a lot of people getting involved – including a lot of people (ie men)  who benefit from the current inequality. Done right, this is not about a take-over by men of a women’s issue, but about making the discussion of gender and power a fundamentally human issue, and one that affects us all.

A great place to start is with young people – particularly during the teenage years when, as the #DearDaddy video sets out, casual sexism is frequently normalised. In the Balkans, CARE has pioneered an approach that shows men and boys can be allies and champions for change. This work with young men has helped change attitudes and behaviour – and stop the cycle of violence from spreading to the next generation.

We run a programme in Bosnia & Herzegovina and Kosovo – and more recently in the Democratic Republic of Congo and Burundi – that takes teenage boys and girls through a course (that is on the curriculum at school) on gender equality, power and violence, healthy relationships and sex education. Coupled with out-of-school activities, these programmes have been hugely successful at bringing to the fore some of the unconscious and destructive attitudes young people have about what a man or woman should be.

Aimed at post-conflict contexts, these lessons also help to make visible the wider culture of violence that affects men as well as women. Everyday Sexism Project founder Laura Bates visited this work in action in Kosovo. She said:

“One of the boys said something that really stuck in my mind. He said: ‘You know, the thing is, this really needs to be taught from kindergarten. At this stage we’ve already gone through puberty, a lot of boys of our age think they already know everything and that they don’t need to learn anything new.’ He said: ‘I just wish that boys all over the world could learn about these things from kindergarten.’”

Whether you like or dislike the video itself, I hope that it makes viewers ask themselves two questions. First, do you think the problem being described is real? And second, what can be done about it?
For CARE, actions both small and large can play their part. From stepping in to stop a friend from telling a sexist joke, to working to bring gender equality into the school curriculum, recognising how power is held and used is fundamental to addressing gender inequality, gender-based violence – and indeed, tackling poverty.

You don’t need to be a dad to make this personal. Just look at levels of male depression and suicide to see how rigid attitudes about gender hurt men too. But overwhelmingly, the seriousness, scale and repeat experiences of gender-based violence affect women more than men. So ask your friends about their experiences, interrogate yourself on how power and gender are related in our society – and then go out there and help change history.

This blog was first published on the Huffington Post Blog.

More in this category: « UK BIS Department review of corporate responsibility fizzles out in non-report Refugees: A spiralling politics of fear and the imperative for compassion »