Home // Development Blog // Despite the IPCC's bad news, it's not too late to act on climate change

Despite the IPCC's bad news, it's not too late to act on climate change 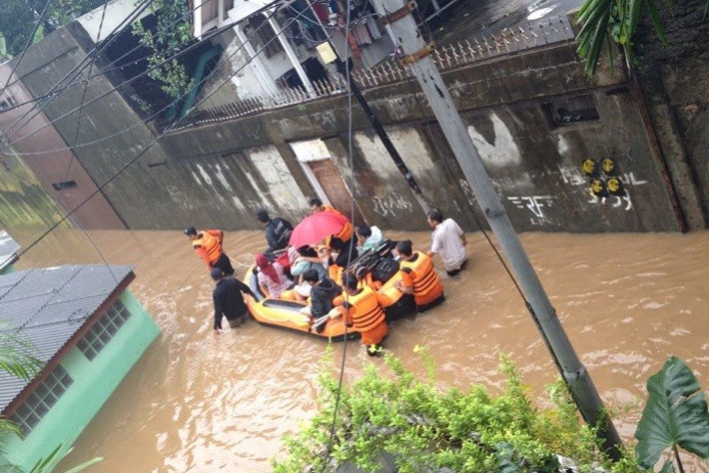 A rescue during flooding in Indonesia in January 2013. © CARE / Paul Dixon

This week’s report from the Intergovernmental Panel on Climate Change (IPCC), the world's top scientific body focusing on the issue of climate change, can be summed up in two words: bad news.

Not only are climate scientists now at least 95% certain that humans are responsible for causing climate change; they also paint a dismal picture about how our planet is coping with the effects of a rapidly warming world.

The IPCC 'Physical Science' report, released in Stockholm on Friday, is the first in a series of four new IPCC studies to be made public over the next year. Through a comprehensive review of the latest climate science, it shows that global temperatures are increasing, sea-level rise is accelerating, oceans are warming and acidifying, rainfall patterns are changing and both glaciers and Arctic sea ice are in decline. In short, climate change is happening right here and now and humans are responsible for it.

Little surprise for the poorest

For the world’s poorest people, whom CARE supports each and every day, these findings come as little surprise. They hardly need reminding about the serious and worsening impacts that extreme and unpredictable weather and longer-term climatic changes are having on their lives.

A quick survey of CARE’s recent emergency operations shows that in the last five months alone, a typhoon ripped through the Philippines displacing 100,000 people, torrential rain and flooding in Mali killed 30 and uprooted thousands more and major floods struck Benin and Pakistan. Highland communities in Peru continue to suffer from an unusually cold spell, the likes of which has not been seen for a decade. Even if the meteorological complexity of these individual events makes it difficult to fully blame the changing global climate, it is undoubtedly having an effect on the multiple, and often unusual, catastrophes we’re seeing.

Of course, the true impact of these extreme and unpredictable events is far worse than the statistics reveal. Lives are being lost, homes are being destroyed, livestock and crops, which people rely on to feed their families and make a living, are dying. It’s no exaggeration to say that the world’s poor, who are already vulnerable to shocks and have the least resources to cope, are recovering from one emergency only to find themselves facing another.

Middle income and rich countries are being hit hard too. Just last week, Mexico was battling major storms on both of its coasts and torrential rain in Colorado has led to the worst flooding seen in the US for decades. The bills for both will likely stretch into the hundreds of millions of dollars.

And, the IPCC’s findings show we are now on a path towards even more dangerous impacts. If we continue to pump greenhouse gases into the atmosphere at the current rate, the future of our planet looks bleak. According to the latest science, average temperature increases may reach almost 5°C by the end of the century compared with pre-industrial levels. Considering that, so far, the planet has only warmed by almost 0.9°C, a change of this magnitude will completely alter the fundamentals of life on Earth and cause tremendous loss and significant damage.

But the good news is that there is a great deal we can do about climate change and it’s certainly not too late to act. The latest IPCC report provides more detail about how different levels of emissions are likely to warm the planet and how, therefore, average global warming can be kept as far below 2°C as possible, the threshold at which scientists believe we can avoid the most catastrophic and potentially irreversible impacts.

CARE is already working hard to ensure that valuable gains in the fight against poverty made over many years are not reversed. In Kenya, Mozambique, Ghana, Nepal, Peru, Thailand and elsewhere we are helping people to plan and prepare for climate-related risks, so that the impacts of climate change don’t tip them back into extreme poverty.

Governments must act - we can still avoid the worst

Of course, these measures must go hand in hand with larger-scale changes at a global level that dramatically cut emissions. In fact, all governments have already committed to limit global warming to below 2°C – it’s both possible and has considerable benefits. By using sustainable and low-carbon energy sources, minimising fossil fuel use, protecting our valuable ecosystems and shifting to more sustainable production and consumption, we can still avoid the worst.

Governments must take urgent action to support their citizens to limit global warming and help them cope with its impacts – indeed, the richest countries and citizens, who have done the most to cause climate change, have a particular responsibility to act.

If we learn just one thing from the IPCC’s findings, surely it’s this: the risks of a ‘business as usual’ approach to climate change, for the world’s poorest and for us all, are far too great to ignore.

Dr Robert Glasser was formerly the Secretary General of CARE International responsible for coordinating the work of the CARE confederation. He was previously Chief Executive of CARE Australia, overseeing aid programmes in countries including Cambodia, Vietnam, Papua New Guinea, and Jordan. Prior to coming to CARE he was Assistant Director General at the Australian Agency for International Development (AusAID).

Dr Glasser has also worked on international energy and environmental policy for the US Department of Energy at Cornell University's Peace Studies Program and the Centre for International and Strategic Affairs at the University of California.

More in this category: « Preventing another Rana Plaza: Mapping the path forward A call to action on gender and humanitarian reform: What happened at the high-level review at the UN General Assembly of the Call to Action? »