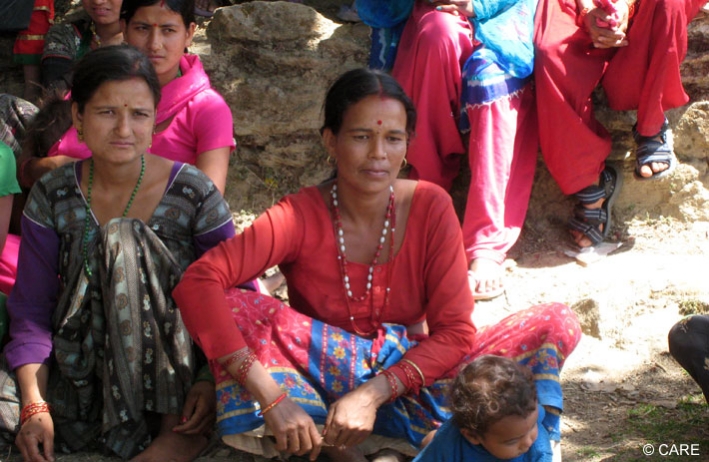 Women in Sanfebagar, Nepal, where the EMPHASIS project runs a drop-in centre © CARE

Earlier this year, I spent a few months in a village in Accham district in far-west Nepal in an effort to understand what motivates people to leave their homes and migrate to the towns and cities of India, writes Tahseen Alam from the EMPHASIS project. Documenting the lives and experiences of migrants as they made their way from Nepal to India was an eye-opening journey for me as well.

Spectacularly beautiful, life in the hills was also exceedingly difficult. The reasons for migration were obvious: poverty, lack of employment and livelihood opportunities, and a dream of finding a better life for themselves and their families drive these young men and women to leave their homes and loved ones behind.

The reasons why – if we’re serious about tackling poverty and promoting development – we must understand the experiences and respond to the needs of migrants are pretty clear too:

Almost every family we met had a member living in India – and for the majority of households in the far western region of Nepal, migration is a major source of income. Remittances, or the money that migrants send back to their source countries, make a significant contribution to national economies. Global remittance flows are estimated at US$581 billion this year, up from $542 billion in 2013, and $404 billion was received by developing economies. For developing nations, remittances are an important source of foreign exchange and, according to the World Bank, “act as an antidote to poverty and promote prosperity”.

In Bangladesh, Nepal, Pakistan and Sri Lanka, remittances are larger than the national foreign-exchange reserves. In Nepal, remittances are equivalent to more than 24% of GDP. At the household level, remittances help to reduce poverty, improve the standard of living, and contribute to higher educational levels and lower school dropouts. In addition to remittances, source economies benefit also from enhanced skills sets and experiences that the migrants bring back.

2. The experience of migrants exposes the lack of workers’ rights

Labour migrants typically find employment in so called 3D jobs (that is, difficult, dangerous and demeaning). Hazardous working conditions combined with lack of proper accommodation makes them vulnerable to disease and illness. Securing workers’ rights for migrants – including safe, secure and dignified working conditions, fair and minimum wages, time-off from work, and freedom to unionise – will ensure workers’ rights for all.

3. Women’s rights are on the line

Women migrants are in an even more vulnerable position as most structures, policies and systems are weighted against them. Women migrants in India are primarily engaged in domestic work which is completely unregulated and hence women migrants are often at the mercy of their employers with little or no safety nets and legal recourse to fall back upon.

The India-Bangladesh migration corridor is estimated to the fourth largest in the world and studies suggest that there are currently three million Bangladeshi migrants in India. The 1950 Indo-Nepal Friendship Treaty allows for free movement of people and goods between the two nations. But there is no similar agreement between Bangladesh and India. This means that women, especially, are exploited by brokers and other informal agents and end up as victims of trafficking.

4. Access to basic services is a significant challenge for migrants and their families

It is estimated that there are currently one million Nepalese migrants in India mostly working as unskilled permanent or seasonal labourers. Although the open border policy allows migrants free passage to India, life at destination is still quite difficult for the majority of migrants. Poverty, exclusion and discrimination – both at a social and institutional level – mean access to health services,  social security, and education opportunities for their children are a struggle for most unskilled labour migrants at destination.

5. Migration can be a key development enabler

CARE’s EMPHASIS project has shown how addressing migrants’ needs opens up development opportunities that ultimately benefit everyone. EMPHASIS (Enhancing Mobile Populations Access to HIV and AIDS Services, Information and Support) is a 5-year project in India, Nepal and Bangladesh funded by the Big Lottery Fund.

Working at all stages of the migration continuum – source, transit and destination – the project focuses on promoting access to services; capacity-building of stakeholders, government, and NGO partners; and research and advocacy to add to the knowledge base on migration and HIV and to highlight migrants’ vulnerabilities and learnings from the project to influence policy-makers at the national, regional and global levels.

Crucially, we found that the opportunity to address HIV vulnerabilities of mobile populations opened up pathways to address a range of other vulnerabilities including access to services such as financial services (including safe remittances), health services, social security, labour rights, education for children, etc.

At the end of the five years, the EMPHASIS project has made significant contributions to the migration discourse in the South Asia region and more importantly, it has piloted a model of an effective cross-border migrant intervention which has highlighted the importance of working along the continuum of mobility to positively influence the lives of the maximum number of labour migrants.

[The conference on Women, migration and development: Investing in the future was hosted by the ODI and CARE in July 2014, and drew on learning from the EMPHASIS project to explore the role of migration in sustainable development. This note was amended after the conference.]

More in this category: « Save the date 10-13 June 2014: CARE at the Ending Sexual Violence in Conflict global summit Ending hunger: The case for going small in a big way »