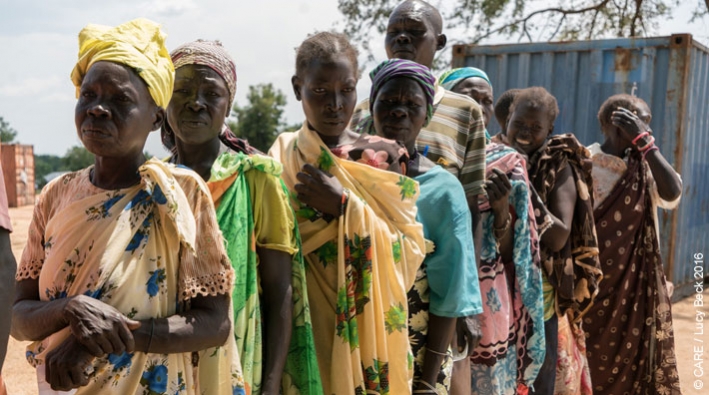 Three years on from the start of the conflict in South Sudan, I returned to the country to help ensure that CARE’s life-saving work reaches the most vulnerable women and girls. The conflict has caused almost 1 in 4 to flee their homes, and our analysis, published today, shows that women and girls continue to bear the heaviest burden as the conflict worsens.

When I fly over South Sudan’s vast expanse, away from the suspicion and gun-fire, I see a country that means so much to me. I see the potential it holds in its rich resources. I see mountains and lush green deltas and tukuls (traditional round huts) dotted here and there. As I prepare to leave once more, my heart breaks.

I first came to South Sudan in November 2010. I was a 27-year-old who thought she knew everything – and promptly found herself completely and utterly out of her depth. I’d done some Violence Against Women and Girls work in South and South-East Asia as well as some human rights work, but nothing in a ‘real’ humanitarian setting. I built up a network of friends – I’m still in touch with many of the national team I worked with then. There was positivity in the air. I was here when the country voted in the referendum, I was here for independence celebrations. The vivid colours of the South Sudanese flags flew proudly in the air from every available mast. It was a time of hope and of good faith.

That first time here kick-started my career. I owe a lot to that time and the opportunities it presented, to the people who took me under their wing and taught me, pushed me, mentored me. During that first time here, I worked as a co-author on a large piece of research. It’s still used now to discuss gender-based violence, gender norms and attitudes towards reproductive health here.

Within that study though, there held a darkness – a darkness that everyone who works on violence against women and girls knows is always there, bubbling just under the surface. Even in those times of levity and celebration, 82% of females and 81% of males agreed that ‘a woman should tolerate violence in order to keep her family together’ and 42% of respondents knew at least one man who forced his wife or partner to have sex. In my job, I saw a huge number of cases of non-intimate partner rapes, child marriage, intimate partner violence. I saw a senior police official in one of the former States marry a child, despite it being against South Sudanese law. Violence against women and girls was simply that pervasive – it was all around you.

Take a moment. Breath in and out slowly, because it gets worse for women and girls. From that pervasive baseline, to now: three years into a political conflict, with ‘ethnic cleansing’ underway, and violence permeating formerly calm locations – how do you think women and girls are doing?

Reviewing CARE’s work in gender analyses over the past three years has revealed that the situation for women and girls has gone from bad to extreme.

CARE works outside of the Protection of Civilian sites, in locations where very few actors are based because of security concerns, and with huge numbers of internally displaced people and host populations in need. Of a population of 12.5 million, 6.1 million were in need of humanitarian assistance as at mid-2016, 1.8million were IDPs, but this number is expected to be significantly higher than that now. There is a general lack of sex- and age-disaggregated data, but through careful analysis of regional refugee data and analyses on the ground, CARE has been able to understand the demographics of those displaced and they are predominantly women and girls, with adolescent boys joining them in order to escape recruitment. A number of those displaced have experienced displacement a number of times.

A CARE Uganda SRH/GBV assessment conducted in September 2016 revealed that women and girls had reported fleeing to Uganda to escape high levels of sexual violence. Sexual violence was reported to have taken place throughout the route of migration within South Sudan itself as well as when crossing the border.

It isn’t just displaced communities facing this extreme sexual violence – it is common throughout the country, with reports that women, men, boys and girls are too afraid of experiencing sexual violence to move out of towns (FEWS alert, 23 August 2016). There has been an increase in the number of reported incidents of sexual violence since July 2016 and reports of sexual violence, including rape, by soldiers in uniform have increased dramatically in the capital Juba. Prior to the clashes in July, sexual violence was being used as a weapon of war in areas of conflict, such as Unity State. Sexual violence has been described as being used throughout South Sudan, and by multiple armed actors, from 2013 to the end of 2016. There are reports of family members forced to watch the rape of their relatives, gang rapes, and survivors as young as 9 years old. Now humanitarian aid workers have also experienced rape by armed actors and since being back here, I have felt what I suppose must be a small percentage of the fear that women and girls throughout South Sudan must be feeling. That constant state of alertness when outside of your home, the steadfast stare into middle-distance when you see armed actors pass you...

With a food security and economic crisis taking hold of the country, survival sex is increasingly being reported and child marriage – an issue which according to records was decreasing – is now reportedly becoming more prevalent again. With the baseline of extremely high intimate partner violence mentioned above, the stresses and strains of conflict, food shortages and economic distress can only exacerbate an already dire situation.

A plea to anyone who will listen

They say that if you drink from the Nile, you will always return to South Sudan. Although I never meant to, I fell in love with this country and they say your first love is your deepest. This time though I leave with a broken heart and a plea to anyone who will listen: the women and girls of South Sudan need support. There is a desperate need for funds to support gender-based violence emergency response programming. We need annual funding of at least $10,000,000 to be able to provide the type of programming needed for women and girls in the most emergency-affected communities for just one year.

This is an epidemic. Please act.