Home // Development Blog // From #REFUGEESWELCOME to the World Humanitarian Summit: What can we learn from the current crisis to inform a new global deal for refugees?

From #REFUGEESWELCOME to the World Humanitarian Summit: What can we learn from the current crisis to inform a new global deal for refugees? 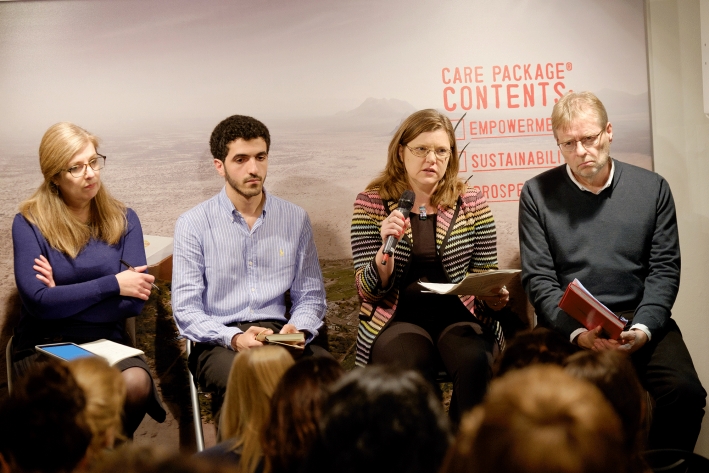 Participants included representatives from Government, the International Organisation of Migration, refugee activists from Syria, South Sudan, and Kenya, international humanitarian agencies, the British Refugee Council, British citizen activist networks supporting refugees that have reached Europe (including Calaid), and others. The event was structured to enable a frank and critical exchange, and this is what we got. Feedback from participants was overwhelmingly positive. The test will of course be in the follow-up, which is for all interested participants to make happen. As the event was organised on a Chatham House Principle (ie. confidentiality for participants), we share here a brief summary of key themes which emerged:

• Politicians in the UK, and across Europe, are out of step with their electorates. Recent months have seen an incredible upsurge in popular support and activism in solidarity with the refugees which have fled situations of war and strife around the world. As such, participants believed there remains scope to build a global campaign and/or social movement in support of refugee rights; connecting advocacy on refugee protection and assistance (including resettlement) to advocacy on addressing the root causes of displacement and protection in countries of origin.

• Humanitarian NGOs witness the suffering on the ground inside Syria and in neighbouring countries. This evidence is powerful and can help to shape the opinion of the British public, media and politicians on the crisis. UK domestic organisations working on refugee protection do not have this same evidence or voice, and they need our support.

• The 12th September #REFUGEESWELCOME marches across Europe, including in London, were the initiatives of concerned citizens – and as such they represented a genuinely grassroots mobilisation. INGOs (including CARE) supported, but did not lead or dominate. To build on this, we need to find ways to combine INGO skills and capacities in campaigning (e.g. through targeted supporter engagement and activism) with wider activism by UK and European activist networks and members of the general public moved by the crisis. A social movement on refugee rights cannot be engineered, but more deliberate steps to partner and align efforts across different kinds of organisations and networks could help.

• With some exceptions, many humanitarian INGOs have been slow to respond to the refugee crisis inside Europe as they have focused on response inside Syria and neighbouring countries (and many of them did not have prior expertise in responding to humanitarian needs in Europe). However, especially as winter approaches, the failure of European governments to provide adequate assistance means that INGO skills, funding and capacity is needed and can add value to existing efforts on the ground.

• Operational support by INGOs to the refugee response inside Europe needs to be complemented by advocacy to challenge European governments, as the primary duty-bearers, to meet their responsibilities under the UN Refugee Convention.

• A key message which humanitarian agencies and others can advocate to European governments is that they must provide safe and legal routes for those who seek asylum. The message is not ‘accept everyone claiming refugee or asylum status.’ Rather, advocacy needs to call on governments of the EU to provide safe, fair and practical entry-points for applicants to have their claims heard. The message is a simple one of treating people with humanity, rather than managing the EU’s borders in a way that makes this impossible. UNHCR noted in a briefing on the 3rd September that numbers coming through Europe are manageable. What is unmanageable is the lack of predictability, the chaos and the changing systems.

• The British Government has allocated over £1.1 billion towards the humanitarian response in the region. This makes the UK one of the most generous donors to the crisis response. Several participants however emphasised that no amount of funding can substitute for the UK stepping up its efforts on refugee resettlement, as the countries neighbouring Syria have reached breaking-point in terms of hosting refugees regardless the funding allocated.

• Several participants described the Syrian conflict as ‘a protection crisis.’ While humanitarian funding is important, the biggest challenges remain in respect of International Humanitarian Law (IHL) by the fighting parties and implementation of UN Refugee Conventions by countries to which people displaced from Syria have fled. Advocacy by INGOs and others has secured commitments on protection by the world’s most powerful body, the UN Security Council, and yet these have failed to translate into any noticeable change in the conduct of hostilities and their impacts on civilians inside Syria. UN Security Council Resolutions on protection of civilians from the violence have been more honoured in the breach than the observance.

• The importance of local Syrian NGOs and networks of activists in delivering aid inside Syria was stressed by several participants. As such, Syria has high relevance for the World Humanitarian Summit deliberations on the ‘localisation’ of humanitarian action. The central role of local organisations needs to be recognised and empowered. CARE International’s comprehensive approach to partnership with local NGOs was highlighted as an example of promising practice; aimed at promoting the development and sustainability of local civil society. This includes going beyond contracting local organisations as ‘implementing partners’ to undertake aid disbursements to include investments in their procurement, financial management and other capacities.

• The World Humanitarian Summit offers an important opportunity to rally civil society in the global north and south to pressure governments and the wider international system to better address the above challenges. A sense of outrage and large scale popular activism is necessary to challenge the failure to protect people inside Syria as well as those who have fled. But immediate action is also required to mobilise assistance and protection for those suffering now as winter approaches.

More in this category: « What can CARE do for business? – Taking partnerships to the next level in Pakistan Closing the Gender Gap at the World Humanitarian Summit and beyond: What role for business in empowering women in humanitarian contexts? »