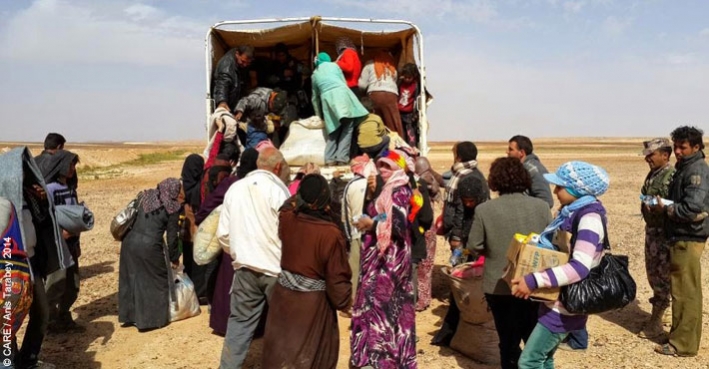 Syrian refugees being transferred from the Syrian-Jordanian border

I met several Syrians in Jordan and Turkey during a recent visit (mid-January). All of them said they just wanted the war and the violence to stop so they could go home. Some were more hopeful than others that this would happen soon. But that’s what they all wanted.

So, what if we try to be a bit optimistic. Are we ready to respond if we get what we’re asking for?

In a notable breakthrough of the Syria peace talks in Vienna in November, the International Syria Support Group agreed to convene the Government of Syria (GoS) and opposition representatives in formal negotiations under the auspices of the UN. The Support Group, made up of virtually every direct and indirect foreign state participant in the Syrian civil war, has aspired to find a solution to the destabilising Syrian civil war, and progress has increasingly appeared to be within reach. The current timeline for the peace plan agreed to by the International Syria Support Group, and endorsed by the UN Security Council in December, is:

Helping the hard to reach

If there is a ceasefire in May 2016, it should become much easier to help the 13.5 million people still inside Syria and affected by the war, including 3.7 million women, 6 million girls and boys, and 1.5 million people with disabilities. 250,000 people have been killed and over one million injured with adult men being most affected. In particular, a ceasefire should bring an end to the sieges and make it easier to reach more of the 4.5 million people in the hardest to reach parts of the country.

In Turkey last week, I met four of the local organisations that CARE supports to work inside Syria. I met a Syrian doctor who still spends about half of his time going into Syria and running a field hospital in Aleppo, in the basement of a building, so that they can keep working despite being bombed twice over Christmas. One of our partners focuses on delivering food vouchers to families inside Syria, which they can use in Syrian shops. Between them all, they have some 2,000 Syrian staff working inside Syria, helping their communities survive the intensifying war.

Helping people who used to have very different jobs in the old Syria to set up new local aid organisations in a war zone has not been easy, especially for them. But they have risen to the challenge. So, if peace breaks out, should we stop supporting them just because it might be easier for us to do it ourselves again? I don’t think so.

As the World Humanitarian Summit will declare in Turkey in May this year, local organisations are always the first responders to humanitarian disasters and sustainable development is about investing in their ability and capacity. The idea is to sustainably reduce the amount of external help people need.

Having achieved something in Syria by supporting this local capacity, let’s not undo it. So, instead of expecting a ceasefire to mean we want lots of foreign aid workers inside Syria, let’s start planning for how we can help those local organisations adapt to a ceasefire and start to help more and more of their fellow Syrians.

This is definitely a more sustainable long-term strategy. It’s also likely to be more effective in the very short term, if we plan for it now. In addition, it can be a way to employ well-educated and highly skilled Syrians who have lost their former livelihoods, and avoid the situation we have seen in some countries where donors and NGOs find themselves hiring local doctors as drivers.

It is also of course an opportunity for Syrian refugees who want to return quickly and help with the immediate rebuilding of their country. That is such a better peace to build, than to disempower Syrians just as they get their country back.

More in this category: « Modelling social accountability in the Global Goals: Citizen-led measurement in Bangladesh On International Women's Day, is gender equality India's next competitive advantage? »