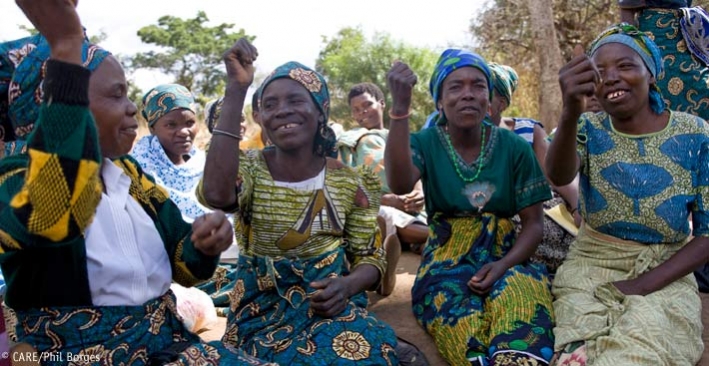 “What gets measured gets noticed,” said Hilary Clinton. True enough, which is why officials are meeting at the UN this week to thrash out how the proposed new Sustainable Development Goals will be resourced and implemented. The UN Secretary General has called for a Data Revolution. At CARE, we want a citizen-led revolution from the local level upwards to track progress against the new goals. How could this work in practice?

There might be general agreement that without a focus on implementation, the SDGs simply will not be kept to and achieved. However, governments get extremely uncomfortable when it comes to words like being held accountable or being monitored against progress for delivering the SDGs. Rightly or wrongly, they see this as too much interference from other states in their own affairs.

South Africa on behalf of the G77 and China, along with Niger on behalf of LDCs (least developed countries), prefers the language of “differentiated capacities” of countries. They would rather that developed countries are held accountable for  funding development, but that LDCs and other countries with less capacity should not be held to unrealistic standards or demands. These long-standing UN battles (which also threaten climate negotiations) will decide whether or not the SDGs live or die.

But why not take a step back, to the local community level where the impact of the SDGs is really needed? We think citizen monitoring could be a way through the maze. Increased citizen monitoring at local levels could solve a data problem; it could help solve the political problem; and it could also – dare we say it – more directly benefit the very people that the SDGs are actually meant to support.

1. Filling a gap in the data revolution

One of the main criticisms of the existing MDGs was their inability to track whether they were benefiting the very poorest. Global and national measures of progress against the targets masked exactly where and who was benefiting from the MDGs. So typically, whilst Asia looked as though it was powering ahead in reducing poverty, this was largely due to rapid economic growth in urban areas of China.

CARE International believes that a data revolution requires more than just better technology, more government surveys and more government transparency in publishing data. This is only one (albeit important) side of the equation.

The other is about building participatory monitoring – a tried and tested approach that could give local relevance and ownership to the otherwise internationally-led monitoring mechanism. Local governance is the first point of contact between citizens and the state. And, as some exciting forthcoming research from CARE’s experience of using Community Score Cards shows, these tools have led to strengthened service provision AND community-state relations in all four countries where they have been used and compared.

Community Score Cards have helped monitor a range of services, from education budgets to whether survivors of gender-based violence are receiving a decent service from the police. In Rwanda, our researchers went to a community where local women, and the police themselves, were ‘scoring’ the police service on preventing sexual violence. The police gave themselves 10/10. The women gave them 2/10. The police couldn’t understand it. So we facilitated a conversation and the police started to understand it. They agreed on a score of 6/10 but more importantly the police heard what they needed to do better or differently.

The trick for the SDGs will be making sure that local level monitoring is closely linked to sub-national and national monitoring systems. This will require further thinking in terms of how it could happen in practice (especially if all 17 proposed goals with their 169 targets remain on the table...).

2. Solving the political problem of ‘accountability’

If we can shift the debate away from solely focusing on a global monitoring system that some states will argue only encourages naming and shaming, and instead bring attention to ensuring that implementation is primarily about citizens AND local authorities working together to monitor and deliver the goals, then we might see some progress in the negotiations.

The geo-political bun fights that will inevitably play a part in the deliberations over the final shape of the SDGs will not be easy, but if officials meeting this week (and beyond) fail to recognise the power of citizen monitoring, and the success it has had in building state capacity to deliver services to the poorest, then we are surely missing a trick.

More in this category: « Three lessons from the Democratic Republic of Congo for the Global Summit to End Sexual Violence in Conflict Call to Action on gender-based violence in emergencies: 4 ideas for the Roadmap »