Home // Development Blog // How do you support economic development in fragile states?

How do you support economic development in fragile states? 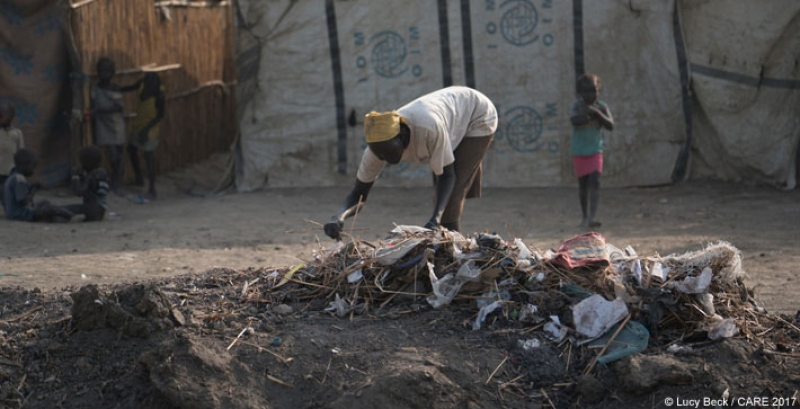 A woman cleans up garbage in Bentiu Protection of Civilians site in Unity State, South Sudan

A new Commission on State Fragility, Growth and Development, launched by the International Growth Centre and chaired by David Cameron, has recently been announced. It points out that “Fragility is a distinctive phenomenon that calls for distinctive policy approaches. It has been under-researched, and what is known from research has not been used effectively.” Let’s hope that DFID are listening and contributing (which presumably they are, as they fund the IGC) as their approach to economic development in fragile states remains unclear, even after the publication of the new Economic Development Strategy (“the ED Strategy”).

About 18 months ago, the UK Aid Strategy highlighted the commitment to direct 50% of DFID’s spending towards fragile and conflict-affected states. The ED Strategy has reiterated the commitment, with the added more specific commitment that “Economic development will be a significant proportion of this investment”. While that is not the same as saying that 50% of DFID’s economic development budget will be spent in fragile states, let us assume that it still means that a lot will be spent.

Although the ED Strategy does not discuss this in much detail, this view of how economic development works is based on the experience of the ‘Asian Tigers’. The 2014 DFID Economic Development Strategy Framework was more explicit about this, referring to the findings of the 2008 Commission on Growth and Development as a basis of its recommendations. That report in turn built upon an analysis of the 13 countries that had achieved “high, sustained growth in the post war period”. Of those 13 countries, only four were not in Asia: Botswana, Brazil, Malta and Oman, a fairly disparate group. So it seems fair to say that the Asian Tigers model is pretty key to the DFID theory of economic development. I have some serious concerns about whether this Asian Tigers model can even work in many non-fragile poor countries, eg small, land-locked African countries, but my main concern here is DFID’s thinking about fragile states.

The problem of fragile states

The ED Strategy recognises that things may be different for fragile states: “South Sudan, for example, is not poised to emulate the growth path of South Korea. Local politics, conflict and the strength of institutions shape what is feasible together with the regional and international environment” (page 9).

From a CARE perspective, we have started to highlight what we think works in fragile states in our publication Resilient markets: Strengthening women’s economic empowerment and market systems in fragile settings. This discusses CARE initiatives, many of which operate at the ‘micro’ level, but the report also highlights that “… it is not proven that support to multinational firms or export-boosting strategies will provide either quick employment creation or promote equality. Investment in production may lead to an upgrade in technology and machinery rather than an increased workforce.”

This is arguably a direct challenge to the Strategy, which premises economic development on exactly this type of inward investment and improvements in productivity but then does not explain how this will work in more fragile states, and importantly how it will support a move to stability. It does make the point that the Department’s approach is context-specific and based on in-depth assessments of each of DFID’s 28 partner countries. And there are some pointers, such as DFID saying they will base their work on “robust analysis of local politics and conflict risks so that we seize opportunities in difficult environments and stimulate investment that helps countries out of instability”, and that “In fragile states, we will adapt our approach to meet the added challenges of conflict and instability.” But isn’t this just somewhere between common sense and platitudes?

Spread across the document are some pointers to what may be done in fragile states, but they are disparate: for instance “improving conditions in informal micro-enterprises or smallholder and subsistence agriculture” and “We will continue to focus on access to financial services, especially encouraging the use of new technologies to help the hardest to reach, including … those in fragile states.” These are not transformational, but they can deliver low risk benefits to the poor and marginalised, when there is very little opportunity for effective long-term positive change. This is to be welcomed, but how does the commitment to “build the potential for developing countries ... to integrate into global value chains” work in fragile states?

The most recent report of the House of Commons International Development Committee (UK Aid: Allocation of resources) suggests that DFID even lacks clarity on how to define fragility: “We also recommended that DFID should consider the OECD’s new multidimensional fragility framework. That framework has now been published, presenting a much more considered and complex definition and conceptualisation of fragility than that which appears to be being used by DFID, and with a much clearer methodology.”

Is help at hand?

At the launch of the Commission on State Fragility, David Cameron said that one of the Commission’s aims is to develop a roadmap to show governments, donors and international institutions how to build state resilience and economic growth, built on solid academic analysis.

Such a roadmap would be of enormous value to DFID (and indeed to all of us NGOs who work in fragile states). However, there is significant scepticism on whether such a roadmap is possible. Chris Blatmann has just set out his worries:

“I’d argue that development economics is focusing on the wrong things. The problem in the poorest countries today is first and foremost politics. More people should be trying to understand what is up with Sudan or Nigeria or Afghanistan, and how societies like these can constrain their leaders and states; how states can build better bureaucracies, collect more revenues, and shape society; and how the risk of coups and conflicts and crises can be averted…

“DFID is one of the few donors supporting this work on a large scale. I wish they would do more of it. But that gets me to my second point: I would have a hard time convincing myself, let alone Bill Gates, that this is the first and best way to spend money… I’ve enjoyed reading many of the papers and reports… But did any of them, even the best, ever have a direct impact on policy? I’m not sure anyone knows.”

In the meantime, let us hope that DFID’s work on economic development in fragile contexts is cautious, skewed towards ‘bottom up’ approaches of strengthening local and often informal institutions, and reaching the poorest and most marginalised.

More in this category: « How to measure Value for Money in delivering aid Does DFID’s new Economic Development Strategy imply that they are willing to countenance low labour standards from businesses whose growth they support? »