Home // Development Blog // How to assess the impact of microfinance? Ask the clients

How to assess the impact of microfinance? Ask the clients 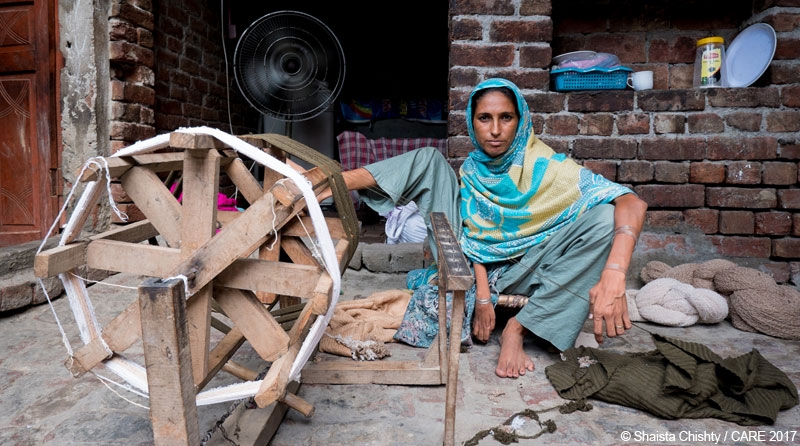 Allah Rakhi, a seamstress from Pakistan and recipient of a Lendwithcare loan

The main objective of CARE’s microfinance programme Lendwithcare is to improve the lives of poor people. So how do we measure whether we are achieving this or not? In Pakistan, with our partner organisation Akhuwat, our household survey of loan clients provided some intriguing answers.

Data from our microfinance partners

On a quarterly basis we collect data on a range of social and financial indicators from each of our microfinance partners (MFIs). Criteria such as repayment rates are useful indicators of the performance of an MFI. If loans are being regularly repaid, we can generally assume that the purposes for which they’re being used are generating returns. This is one indication that an MFI is successful.

Other criteria, such as the number of loans to female borrowers, the average loan size, the purposes for which the loan is used, and the proportion of borrowers from rural areas, allow us to draw up a profile of clients in terms of their gender, location, marital status and type of financed activity. We can also analyse the efficiency and financial strength of MFIs by reviewing indicators such as the ‘portfolio at risk’ (the proportion of their loan portfolio that is overdue), the value of outstanding loans, return on equity, and financial and operational sustainability.

Turning the focus on the clients

However, on their own the above are not sufficient indicators, as they tend to focus on the institutional health of the organisation rather than the well-being of the clients. High repayment rates can be misleading – for example, when borrowers seek funds from third party sources so that they can repay the original loan on time, but in the process become further indebted. The numbers of loans given to women may hide the fact that husbands or other male relatives sometimes appropriate loans and invest badly or misuse the money altogether, leaving women borrowers with heavy repayment burdens. We therefore cannot rely solely on financial indicators to assess performance.

We also need to complement the information gathered through monitoring the financial criteria with more in-depth social performance analysis, which examines the changes in the lives of clients and the performance of their businesses. This information is also useful because it helps us understand the ways in which poor people utilise loans, the constraints they face and the reasons for their success or failure. This information is also directly relevant to operational design issues, and can assist in improving the services offered in a way that not only increases impact on clients but also improves the performance of the MFI itself.

Therefore, during April and May 2015, in collaboration with the Portsmouth Business School at the University of Portsmouth and Akhuwat, our partner organisation in Pakistan, Lendwithcare conducted a household survey of 500 of Akhuwat’s new clients, as well as a comparison group of 100 non-clients. Each interview consisted of a detailed questionnaire, as well as the Poverty Probability Index scorecard (PPI – a poverty measurement tool developed by the Grameen Foundation).

The clients came from three branch offices, namely Badami Bagh, Kot Khawaja Saeed and Kahna Nau, located in Pakistan’s second largest city of Lahore, and one branch from the much smaller city of Kasur, located close to the border with India. All clients were about to receive their first ever loan from Akhuwat. The comparison group comprised of people living in close proximity and with similar businesses to the clients, but who had never applied for a loan from Akhuwat or any other microfinance institution. The baseline data revealed no significant differences in the personal or businesses indicators of clients and non-clients.

Almost two years later, between February and May 2017, the process was repeated and we re-interviewed 447 of Akhuwat’s clients and 55 of the non-clients. (One of the main challenges we faced was locating members of the control group to re-interview, mainly because they were reluctant to be interviewed, had moved to other parts of Lahore, or had left the city altogether.) At the time of the second survey all the clients had finished repaying their first loans, which were typically for periods between 12 and 20 months. Almost two-thirds of clients (63%) had applied for a second loan that had already been approved or was in the process of being evaluated, while 13% were thinking of applying for a second loan but had not initiated the process.

What do the results show?

A comprehensive analysis is contained in an excellent paper written by Joana Afonso from the University of Portsmouth. However, some of the main findings are:

The PPI data enabled us to assess changes in household poverty levels. On average the results point towards a reduction in the clients’ poverty levels, with a lower likelihood of client households being considered poor in 2017 as compared to 2015. Specifically:

Arguably, two years is a relatively short period to observe changes in people’s lives, so we plan to interview the clients and non-clients for a third time in 2019 to capture further changes in their businesses and households.

More in this category: « Maintaining UK responsibilities towards refugees post-Brexit 2018 development prediction: 4 ways to make sure the future is feminist – from London to Yemen »