Home // Development Blog // How to prepare for the unpredictable, shelter in India

How to prepare for the unpredictable, shelter in India 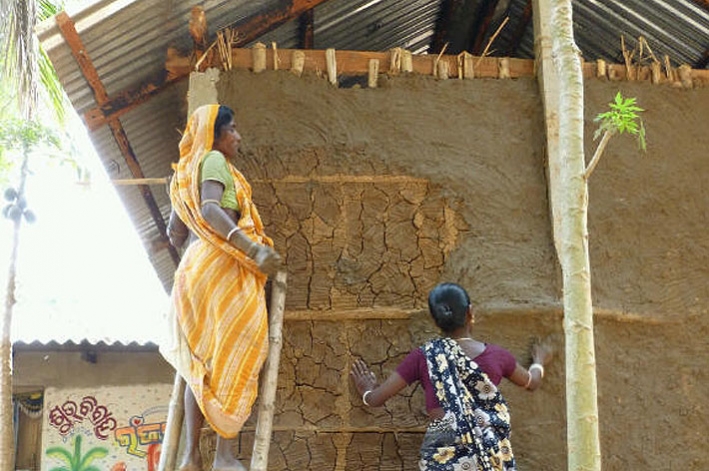 Finishing touches to the walls on a new home - built after the recent floods in Orissa, India, to withstand future floods. © Philip Barritt / CARE

The journey from Bhubaneswar, Orissa's state capital to Kendrapada district is long. As we drive modern India shouts from bill boards and hand painted adverts. The roads get ever smaller. Billboards and tarmac are left behind and soon we are bumping along dirt tracks. Below the raised roadway the flat landscape reaches away punctuated with villages and rivers.

Last October heavy rain fall caused flooding that hit this region twice in the span of 15 days. 2.5 million people were affected, with many families losing  their homes and crops.

"How do we predict this? The floods have never been so bad before, you never know." says Santilata Malik, a widow.

With funding from ECHO, CARE India are working with a partner organisation to support affected families.

The dirt road we arrived on was rebuilt by members of the community. Cash payments for the work enabling them to purchase food and other vital items.

On either side the vibrant green of fresh paddy shoots stands out against the dusty village. Crops cultivated from seeds distributed to replace those lost.

Inside one of the shelters I have come to visit, Santilata Malik spreads mud plaster on the woven bamboo walls. Her previous home was built from weak mud walls, however the design of the new shelter is different.

The floor level has been raised and strong deeply embedded reinforced concrete columns support a timber roof. Next time the unexpected happens and the waters begin to rise, she will still have a home when they recede.

Philip was formerly Emergency Shelter and Reconstruction Advisor with CARE International UK, providing deployable shelter capacity to CARE for both disaster response and preparedness. Philip advised on the management, technical and quality aspects of shelter and reconstruction projects.

Philip is a chartered civil engineer with experience designing and managing construction projects in both the private sector and during emergency responses. He has a particular interest in the positive impact of the provision of shelter on vulnerable people including livelihood regeneration, improved health and increased resilience to future disasters.

More in this category: « Reaching the Summit – a celebration, and a massive to do list – Part 2 Are projects that help people adapt to climate change good value for money? »