How to put gender equality at the heart of resilience work 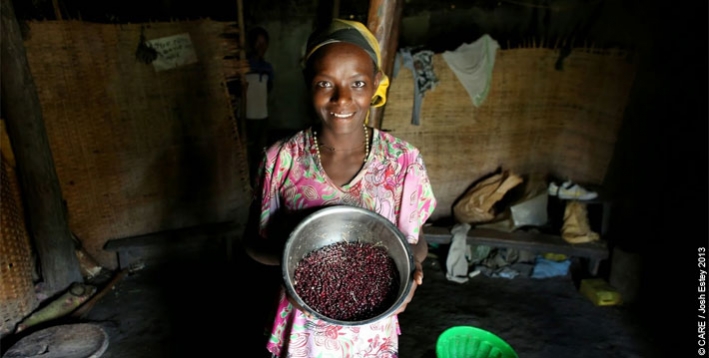 Hana Eliyas, a farmer in Ethiopia participating in the GRAD (Graduation with Resilience to Achieve Sustainable Development) programme

Two recent CARE workshops have helped frame for me the resilience discussion that has come to dominate development discourse over the last five years. In fragile contexts, can we afford to be ambitious with our programming goals to encompass both gender transformative action and crisis adaptation? And more to the point, can we afford not to?

Women’s empowerment is at the core of resilience

Last week my colleague Tim Bishop wrote about one of CARE’s resilience projects in Ethiopia and asked the question what relationship there was between the resilience of an individual and a wider market system. Picking up on this thread I wanted to write down some of the ideas we are engaging with at CARE as we come to formulate our ambitions for strengthening both systems and individuals in fragile and conflict-affected settings.

A few days ago many of CARE’s leading resilience thinkers came together to thrash out a framework which, alongside gender equality and inclusive governance, will characterise CARE’s approach to humanitarian and development assistance over the lifetime of its strategy. While the actual framework is still being worked on, the key non-negotiables included:

Encouragingly, a few weeks earlier in Cairo, we had come to very similar conclusions when defining our work on market systems in crisis. While any economic development programme targeting women would have to succeed on its first goal of increasing economic security, our goal was to ensure they also considered and factored in coping with risk, as well as actively sought out opportunities to empower women and promote gender equality.

Our working hypothesis is that empowering individual women is not only the right option but will also strengthen the overall resilience of a market system which in turn protects those women gaining their livelihoods within it.

These are not luxury extras. Without factoring in risk, humanitarian preparedness and development programming will not survive through crises when their gains are needed the most. Likewise, by putting gender equality at the heart of resilience work in the most volatile parts of the world, we are aiming to avoid, prevent, reduce and cope with this volatility in the future.

We are still working out how to fully translate this vision into our programming. However, three initial areas stand out for both our policy discussions and for delivering change through projects.

1. Focus on women’s leadership and participation

Linking our humanitarian and development work, the strengthened participation by women and local women’s groups in decision-making, project implementation and accountability is central to empowering women, delivering effective programming and challenging wider attitudes to gender.

At an economic level, promoting the visibility and leadership of women in value chains – from owning individuals owning farms, to chairing collectives, to acting in groups in more profitable positions in the chain – will be a visible indicator of empowerment which in turn supports system resilience.

Both in considering the socio-ecological environment and in factoring in gender equality and voice, social norms are seen as crucial to longer term change and sustaining transformed gender roles. Research from CARE Australia coming from a humanitarian perspective has recently called for more thinking on how you sustain the changes that are observed during crisis. Our second working hypothesis is that norms are in flux and that positive changes can be supported, which is critical to supporting the leadership role we envision women playing.

As Tim explained, the clarity of Absorb – Adapt – Transform in describing resilience is hugely helpful in moving from theory into programming.

At the resilience workshop, some made the case for two further precursors in Prevent and Anticipate. However, for me the key is to have a simple analytical and design tool which can easily be included in humanitarian and development programming kitbags. Where resilience thinking will most support humanitarian actors is to challenge them to find appropriate ways to transform exposure to risk for affected populations through life-saving support, as much as they already consider it in their longer term disaster risk reduction work.

As noted, much of this is work in progress. An alternative title for this blog could have been Workshop resilience – how to cope with multiple workshops on resilience. Perhaps next time.

More in this category: « Modernisation and development: How the private sector can help bring them together for inclusive growth An Afghan refugee girl’s message for European heads of state: “We have been spun around aimlessly by Europe” »