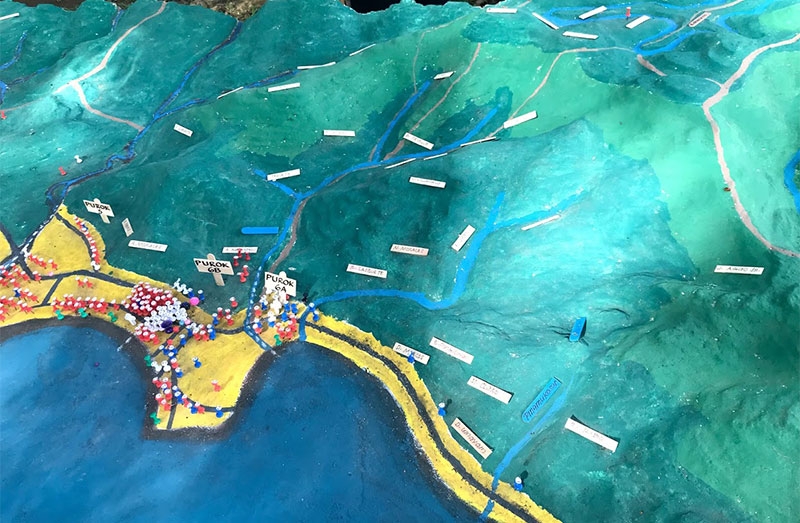 3D mapping of the coastlines of Dingalan in the Philippines

In late November 2018, Saigon was submerged by Typhoon Usagi – officially the 'longest and heaviest rainfall ever recorded in Saigon history'. Tim Bishop, who lives in Saigon and works for CARE, writes about the initiatives of the TUKLAS Labs in providing solutions for communities to build disaster preparedness and resilience.

One evening during the typhoon, me and my family schlepped home from a friend’s house, up to our knees in water and, overnight, our downstairs bathroom and kitchen were mildly flooded. Thousands of other city residents here were less fortunate – one man was killed by a falling tree not far from where we live, and stories were shared overnight of people abandoning their homes and finding refuge elsewhere. I’ve written before about storms in Saigon, and the natural occurring disasters in South East Asia more generally, but this current season has been busier than normal.

Vietnam often escapes heavy storms, thanks to the Philippines, a country well versed in combating typhoons, hurricanes and tropical storms. I’ve visited the country twice this year, working with CARE team in Manila who manage the TUKLAS Innovation Labs – a initiative supported by UK Aid and The Start Network that seeks out new ideas and solutions from local communities, to help them better prepare for the typhoons and storms which routinely batter the country’s shores.

In my previous blog about the TUKLAS Labs, back in April, I’d written about how CARE had evolved its collaborations with local communities since re-opening our offices in the Philippines, following the catastrophic Haiyan Typhoon of November 2013. And then, just last month, I made a return visit to a TUKLAS event, six hours drive north of Manila, in Dingalan – the Ligtas Art and Resilience Fair – to see how a specific part of the initiative had unfolded.

The Ligtas Fair brought together a range of community groups – coast guards, fire wardens, police units, women’s groups, teachers, artists, youth associations, and the like. The objectives of the fair being to train participants with practical and technical skills designed to enhance the community’s overall resiliency in the face of future emergencies, and also to showcase some of the ideas that the TUKLAS Innovators had inspired, including a 3D Mapping project which re-created the topology and contours of the surrounding coastlines in Dingalan, marking out individual homes and buildings.

From orienteering and rope work, through to geo-mapping techniques and community-managed early warning systems, the day helped align the community’s sense of understanding about how, in coordinating upfront preparedness together, the effects of future cycles of bad weather can be more practically combated, as well as lowering the costs of recovery (a CARE study back in 2007 in fact calculated that, on average, it costs seven times as much to rehabilitate and recover communities from disaster events after they have happened, compared to the cost of investing upfront in appropriate training, coordination and early warning systems).

In September, Typhoon Mangkhut struck the northern part of the country, causing widespread damage and fatalities and, on the morning of the Ligtas Fair, a second large storm, Typhoon Rosita, was making landfall in a similar part of the country. The Philippines has been ranked time and again inside of the top 3 countries in the world most affected by natural disasters, and there are no signs of these events reducing in regularity, nor velocity.

Whilst the country has absorbed and recovered from different disasters over many hundreds of years, the Haiyan Typhoon was the largest ever recorded landfall made, since records of such things were first kept. The scale of the damage afterwards was unprecedented yet, since Haiyan, other countries around the world have also been exposed to a degree of more ferocious and unrelenting climatic events that simply cannot now be undermined by the ignorant skepticism of the many who continue to de-link these seismic calamities with mankind’s contribution to our rapidly changing climate.

Where a campaign such as Draw Down – which I flagged here recently – is targeting institutional and regulatory changes in the face of our warming planet, the work of our team in the Philippines, through the TUKLAS initiative, is 100% focused on mobilising grassroots organisations and local communities to design innovative ways to better prepare for when the next disaster strikes.

Noticeable in the TUKLAS initiative is an over-arching commitment around two things:
1. that the nature of this work has to be designed by those closest to the pain (see my recent post about this very phrase!)
2. that the learning from this work must be made accessible to all.

The results of sticking with this formula, as we saw at the Ligtas Fair, could well stand as benchmarks for other to adopt and adapt – both from the perspective of practical application as well as from one of sustainability. The young people in Dingalan who attended the fair, and who are growing up increasingly informed about the issue of disaster preparedness are, in many ways, themselves the living and breathing answer to the Philippines moving one step closer to coping with the future shocks which will visit their doorsteps.

At Ligtas, there were several workshops facilitated for young people (including using soil to paint pictures about the natural environment whilst learning about the importance of preserving it, as well as a board game curated especially to teach youngsters about climate change) and a strong collective sense of safe guarding their futures by the very act of involving them in all aspects of the community’s disaster preparedness and overall resiliency.

Similar interactions are no doubt happening in other parts of the world. And long may that continue. That regulatory decisions, and government commitments in the face of climate related events, will always be required, is not in question.

What is in question – for me at least, and motivated this year from the privileged time I’ve spent with local Filipino communities – is the extent to which these institutional perspectives take fully into account the situation, norms and resiliency of those people who are most affected by any of these particular crises?

Like many of my neighbours here in Saigon this morning, whose livelihoods might have been compromised by last night’s storms, the answer to this question is of paramount importance if we are going to not only save lives, but also create appropriate solutions and the right environment for those closest to the ‘pain’ of the next emergency, to have more ‘power’ to deal with what transpires afterwards.

We must never cease in ensuring, above all else, that addressing this question is at the centre of everything.

This blog was originally published on Tim's definitelymaybe blog.

More in this category: « What can companies do to tackle violence and harassment at work? How tea communities in Sri Lanka collaborate to achieve social and business benefits »