Investing in peace in South Sudan 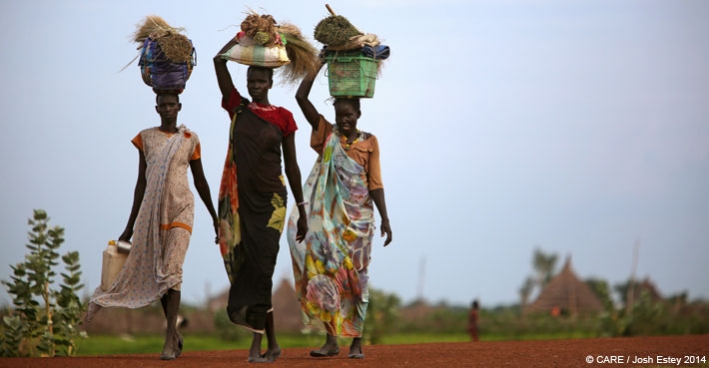 The signing of the Compromise Peace Agreement in August removed one obstacle on the long road to peace in South Sudan, but the future is far from certain. For the fragile peace to take root, South Sudan and its international backers must show patience and ensure equal weight is given to both peacebuilding and economic development.

In October, I spent two weeks in South Sudan, visiting some of CARE’s peace and economic development programming. I used the time to capture ideas from community-level work that could be used in the implementation of the newly signed peace deal.

Even now, the overall political picture is far from certain with the UN warning of the fragility of the agreement and the tenuous peace it’s brought to the people of South Sudan.

December 15 marks the second anniversary of a conflict that has torn the country apart, a conflict that has killed thousands, forced more than 2 million South Sudanese from their homes, and left four million people – roughly a third of this young country’s population – without enough to eat.

CARE is marking the anniversary with the release of our briefing note – “Our small peace cannot survive alone”: Lessons in peacebuilding and economic development in South Sudan – based on research from my visit to both Upper Nile state and Juba. It highlights some of the main lessons from our work. Here are three:

1. Economic growth as a force for peace

Strengthening peace must be a central objective in the design and implementation of economic recovery activities for South Sudan. The people of South Sudan have been living with the culture of revenge killings and the trauma this reaps for decades.  Community reconciliation is imperative; without it, the peace will not hold.

Economic reconstruction should support reconciliation by delivering ‘peace dividends’ to divided communities, which will reinforce mutual cooperation and build much needed trust. For this to succeed, policy makers and peacebuilders will need to talk, to identify where the opportunities lie for supporting inter-community cooperation, and how economic investment can build peace in addition to growing the economy. (In looking at how economic growth can benefit peace I used International Alert’ s new framework on peace and prosperity which I encourage others to read.)

Trading links and small business activity are already bringing peace between communities in South Sudan, and have done so throughout this conflict. Now is the time for policy makers or the private sector to build on these foundations.

2. Peace begins at the community level

Another takeaway was the effectiveness of the CARE-supported Peace Committees in four payams of Upper Nile state. The committees are built on long-established dispute resolution mechanisms so are not in competition with the traditional authorities. Moreover, the near equal representation of women and the inclusion of youth mean the committees reach out to young people, especially men, who are at greatest risk of engaging in violence.

There are 523 payams (the second lowest administrative unit, after states and counties) in South Sudan. A fully funded reconciliation exercise could enhance the traditional mechanisms in each by strengthening their understanding of the national laws so as to protect groups such as women, who have been traditionally marginalised. Likewise, using the reach and presence of the churches throughout the country, a truly national reconciliation structure would be possible.

But even effective local peacebuilding will struggle if national leaders cannot resolve the conflict across the country. In the words of a member of one of the peace committees sponsored by CARE, “There is peace here, but there is no peace in South Sudan. We have to stop the fighting and bring peace to the whole country otherwise our small peace cannot survive alone.” (Name withheld to protect privacy.)

3. Micro-enterprises and women can be an engine for growth

Across the world, CARE has long used its Village Savings and Loan Association (VSLA) methodology for improving women’s livelihoods and their empowerment, and giving them voice in community decision-making. Less well understood is how VSLA groups can be adapted to emergency settings to improve the resilience of communities to absorb shocks – such as providing for those displaced by the conflict, or boosting incomes and food security when other livelihoods fail. The model CARE is applying in South Sudan was doing just that, in part by kick-starting the savings group with an upfront loan, meaning the members didn’t have to wait long before they had saved enough money to start businesses.

As international donors ask how to enable economic development in fragile and conflict affected settings, a look at the power and possibility of micro-enterprise should be top of their list.

We can act now

With so little certainty in the formal peace agreement in South Sudan, it may seem premature to suggest how the framework might be best implemented. The peace deal is important, but the key lesson – that peace and economic development are two sides of the same coin – can be acted on immediately. So too the importance of supporting local reconciliation and peace processes from the payam level upwards.

As we mark the second anniversary of the conflict in South Sudan, we must not hold our breath for change. Instead, many people and organisations are already working for peace in the country – through trade, talks and mediation. International assistance can support them and must play its part.

More in this category: « Putting the ‘power’ into ‘empowerment’: Why decision-makers in business need to think not just about gender equality but about changing the dynamic of power Tackling policy failures on #WorldRefugeeDay and beyond »