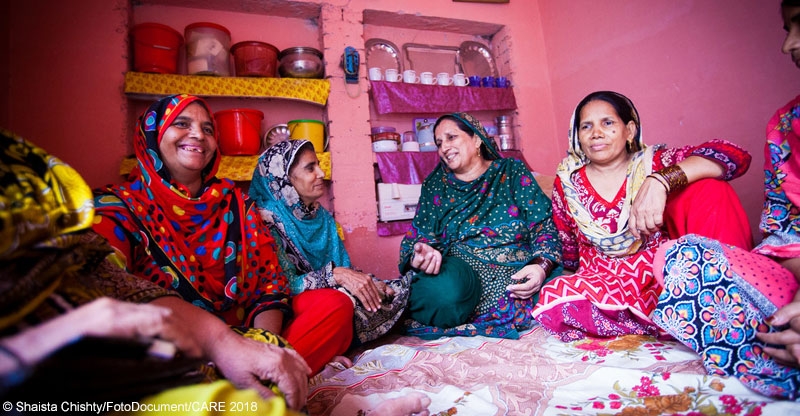 Participants in a Lendwithcare-supported women's empowerment project in Pakistan

Together with a colleague, Professor Malcolm Harper, I recently spent 18 months researching and editing a book on Islamic microfinance – which is defined as Shari’ah compliant financial services for poor people. Here are some of the key findings.

The book, Islamic Microfinance: Shari’ah compliant and sustainable?, examines the experiences of 15 Islamic microfinance institutions (IMFIs) from 11 countries in Asia, Africa, the Middle East and Eastern Europe. The institutions ranged from relatively small non-governmental organisations with a few hundred borrowers to large commercial institutions, such as the Islami Bank in Bangladesh which has almost one million clients. The book focuses specifically on the operating methodologies they employ, the challenges they face and their levels of financial self-sustainability. (For a full description of the analysis and conclusions, I would of course urge readers to buy the book!)

The good news is that Islamic microfinance, despite being a relatively recent phenomenon, is growing.

Certainly the scale, outreach and financial sustainability of IMFIs have all increased in recent years. A long-standing problem that related to the lack of technical expertise has diminished as there are many more skilled and qualified professionals in the industry; and the sector is attracting greater attention at all levels, including from many non-Muslims.

However, Islamic microfinance still comprises only a tiny fraction, less than 1%, of the global microfinance market, despite the fact that an estimated 40 per cent of the world’s poor are Muslims.

Why is Islamic microfinance not more widespread?

Our research concluded that the major constraint was the shortage of finance for existing and new IMFIs. The reality is, if Islamic microfinance had received more financial support it would be far more widespread.

How might this imbalance be redressed? Establishing better links with the Islamic finance industry and encouraging them to downscale, attracting greater support from Islamic institutional donors such as the Islamic Development Bank, creating specialist Islamic microfinance investment vehicles, and even exploring the use of crowdfunding platforms, all have a role to play.

However, insufficient financial support was not the only limiting factor.

The collection of studies identified the lack of diversity, suitability and indeed Shari’ah authenticity as reasons that also inhibited the growth of Islamic microfinance.

Apart from offering finance for enterprise, the range of financial services offered by IMFIs was still relatively limited – there were few options for savings and takaful (Islamic insurance based on co-operative principles) for example. While some IMFIs have introduced mudaraba and musharaka or profit and loss sharing arrangements, ijarah or leasing and even bai salam or forward purchases, these form only a very small proportion of their loans portfolio.

Instead, most of the finance provided by IMFIs is through murabaha which has, in effect, become the default financing technique in Islamic microfinance. Murabaha involves the re-sale of an item after adding a specific profit margin or mark-up. While murabaha may be appropriate on occasions, particularly when IMFIs are able to use their purchasing power to negotiate price discounts with suppliers for fixed assets, it is often ill-suited to the needs of poor people.

In fact, there was a strong demand for cash loans.

Rather than being tied to a particular commodity or transaction, poor people wanted to use cash at their own discretion, particularly when they required funds to purchase small value items from a variety of informal suppliers. Since poor people often use microfinance as a tool for cash flow smoothing rather than for the purchase of significant assets, qard hasan is, for them, a more appropriate financing mechanism. Qard hasan is a cash loan that is repaid without interest or mark-up, although on occasions microfinance providers do charge a very small administrative fee.

We found that even though they had been approved by local religious authorities, some poor people were quite sceptical of some of the techniques used by IMFIs, such as murabaha, because they appeared to mimic conventional interest-based finance. This group were reluctant to demand Islamic microfinance until they were offered what they believed were more authentic products that complied with the spirit, not just the letter, of Shari’ah.

Nevertheless, our research revealed that there was a strong demand for Islamic microfinance.

While some people always demanded Shari’ah compliant microfinance, it appeared that many others (Muslims and non-Muslims) were only willing to consider it if the services offered by IMFIs were at least as convenient, and preferably better, than those offered by interest based microfinance organisations. As it stood, this was not always the case.

Certainly, it should include much more savings and takaful services which are, generally speaking, of more relevance for the poorest people than access to loans. Furthermore, unlike conventional interest-based microfinance it should not promote a ‘one-size-fits-all’ policy.

The core products of Islamic microfinance should be qard hasan for the poorest and profit and loss sharing arrangements such as mudaraba and musharaka for many of the others.

Clients are not reluctant to accept either of these; in general it is actually microfinance providers who are hesitant in promoting them because they consider that these instruments are financially unsustainable, too risky or complex. They are none of these.

We analysed in some detail the experience of Akhuwat from Pakistan which, with more than 850,000 active clients and an outstanding loans portfolio of US$134 million, has demonstrated over the last 16 years that operations based solely on qard hasan can be financially sustainable. Furthermore, the institutions that were bold enough to experiment with profit sharing arrangements reported that these were invariably successful and sustainable.

Poor people are not homogenous and neither is Islamic finance. In fact, it offers a rich variety of instruments that can be tailored to fit the needs, abilities, and skills of poor people – we should use them.

More in this category: « CARE's response to the parliamentary inquiry into sexual exploitation and abuse in the aid sector Brussels Conference on Syria: Three priorities for strengthening a gendered response to the crisis »