Home // Development Blog // It’s not just the economy: Decent work for women means focusing on rights and equality too

It’s not just the economy: Decent work for women means focusing on rights and equality too 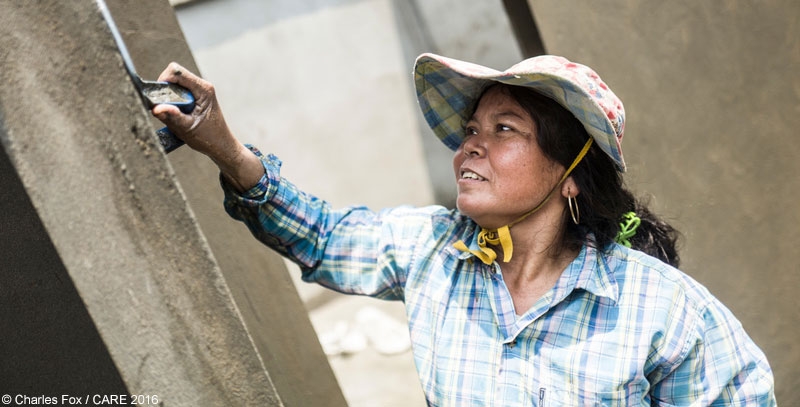 The only good thing about the recent revelations over the yawningly wide gender pay gap at the BBC was the outrage. People felt it was morally corrupt and utterly unequal that women were paid less than men for doing the same job in the UK in 2017. We need to feel the same level of outrage about women’s staggering lack of economic empowerment globally. Without focusing more on the rights and equality arguments, decent work for women will remain out of reach.

Worldwide, less than half of women have jobs, compared with almost four-fifths of men. Women continue to earn significantly less than men, and undertake three times more unpaid work than men. Women also tend to be over-represented in the informal sector and in lower paying sectors and lower paying occupations, where they are vulnerable to abuse.

It’s why the UN High Level Panel report on Women’s Economic Empowerment last year was so timely. People have woken up to the idea that the SDGs and gender inequality will not be tackled without more concerted action to economically empower women.

Politicians and company leaders, many of whom have contributed to the UN process and will be attending our major event on Empowering women in the economy on 6 September, have been encouraged to act on these injustices in part due to some powerful economic arguments. An oft-quoted McKinsey report cites how economically empowering women could generate an additional US$12 trillion to the global economy by 2025. And the UN have noted that investing in women yields ‘undeniable returns on investments’ with women typically spending 90% more on their families and communities than men.

As a pragmatist I firmly believe that if economic narratives help bring key allies on board then they are worth making. We have done this at CARE when trying to highlight the missed opportunity of banking poor clients and the cost of GBV in Cambodia’s garment industry. But an over- emphasis on the economic case leaves a couple of nagging questions for me:

More important is that by just focusing on the ‘economic benefits’ we might miss opportunities to have the impact we should on women’s economic empowerment.

A re-read of a great paper from 2011 by Naila Kabeer, Simeen Mahmud and Sakiba Tasneem based on research in Bangladesh, which asks ‘does paid employment lead to empowerment?’, reminded me of some essentials. The answer to the question is essentially yes – but it comes with a heavy caveat that it’s the ‘type’ of paid work that counts.

Work needs regular payment to be valued by family or society at large – but community health workers reported much more job satisfaction than garment workers. And it often doesn’t come without some ‘pain’ – for example, harassment and abuse (with consequent health implications) that can be caused by the departure from traditional norms.

The paper notes that it’s the ‘very small minority’ of women in formal/semi-formal employment that report the most positive empowerment changes – including retaining some control over their income and an ability to invest it in assets and savings/insurance accounts in their own name, to be able to move around in the public sphere unaccompanied, and to know about the labour laws. These women are most likely to be consulted by others for opinions and information, and express optimism about the future and a sense of control over their own lives.

(I also thought it was interesting that whilst we agonise about being saturated by 24/7 media and hooked on screens, Kabeer’s research found that one of the most consistent variables in promoting women’s voice and agency in Bangladesh was regular TV watching.)

Decent work must become the norm, not the exception

So, all of us concerned with WEE should be utterly focused on shifting that very small minority of women that Kabeer found to have ‘decent jobs’ to becoming the majority. My colleague has outlined before how DFID’s economic development strategy is weak on defining what it terms ‘quality jobs’. It is even weaker when it comes to outlining what a decent job for a women looks like.

Given the huge amounts of money earmarked for job creation at DFID and CDC, a stronger emphasis on the number of decent jobs that will be created for women is vital. At least 50% seems like a good place to start. For us at CARE, decent, or as we say, dignified work means not just having access to a job but also means women have greater control and agency over their lives.

It’s why we are also working to help shift women from semi-formal to formal employment – something our efforts on domestic workers in Latin America seek to do by guaranteeing more rights for previously informal work, as does our work to link informal savings groups to formal financial institutions. Some of these efforts will have ‘an economic return on investment’ (see our social enterprises in Bangladesh and efforts to link groups to banks in East Africa) but mostly they won’t (certainly in the short term).

But if donors, development banks and governments fail to focus on the empowerment ingredients of access, control and agency, we surely miss the opportunity to have a greater overall impact on women’s lives.

More in this category: « Gender-based violence in the workplace – why a new ILO Convention can help It’s good to talk – the business case for good communications on tea estates »