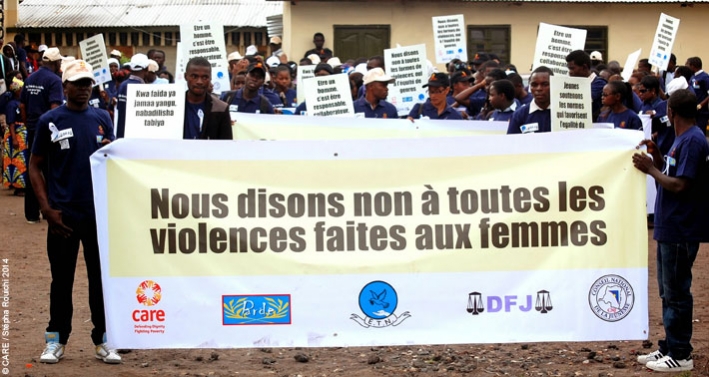 Young men participating in a march against gender-based violence during the ‘16 Days of Activism against GBV’ campaign in the DRC, December 2014

As part of the 16 Days of Activism against Gender-Based Violence campaign, youth of all genders from the Balkans to the Great Lakes of Africa are joining together to change their societies. CARE International believes we should build on this momentum to make 2016 the Year of Engaging Men and Boys in stopping gender-based violence - and that reaching young people through education is key.

In 2006, CARE took a gamble in Bosnia and Herzegovina and started working in tough all-boys technical schools to address high levels of violence by asking young men what they thought it meant to be a man. These teenage boys had grown up a generation after the men in their lives had fought in the Bosnian war, and were consequently surrounded by ideas of masculinity linked to the military, strength and violence. Through these discussions CARE and partners were able to help reshape how these young men viewed themselves and women, how gender and power were linked, and what healthy, consensual and safe sexual relationships looked like.

Now almost 10 years later, over 25,000 young men and women have been through the ‘Young Men Initiative’ (YMI), which includes in-school activities and after-school clubs. Young activists have performed plays, made films, and created social media campaigns to highlight positive forms of masculinity across the Balkans. CARE is delighted that, over the last few years, governments from five countries in the region have certified the YMI curriculum for use in their schools, and started training teachers to deliver the content.

Spreading the lessons to the Great Lakes of Africa

Success can breed success. Two years ago CARE took the YMI and adapted it for almost 300 schools in the Democratic Republic of the Congo and Burundi. The region is troubled by high levels of sexual violence and the team knew that, to break this cycle, young people would need to be engaged before they formed intimate relationships and started to act on the negative examples they may have witnessed growing up. (Read more in our briefing paper, 2016: The year of Engaging Men and Boys in stopping gender-based violence - How a school curriculum-based approach can work)

During the current 16 Days, young men and women will march together through Goma in the DRC to call for an end to sexual and gender-based violence. One young man who will be marching is 20-year-old Josue. He admits that the CARE project has taken him on a long journey and he now recognises women are not treated equally in society: “Women must be supported to be independent and to become in charge of their own lives. When a woman changes, so does a nation.”

Meanwhile in the Balkans, 70 young people from five countries and various ethnic and religious groups are joining together for the 16 Days. They are becoming ambassadors for a campaign calling on people not to be bystanders to violence. The tagline “react as a human – against violence” focuses on the gender bullying, dating violence and sexual harassment that reinforces power inequalities among men and women.

They know that around the world – in countries wealthy and poor – gender-based violence continues to be a problem. As Ognjen, a 17-year- old from Belgrade, said: “We all have a responsibility to not be passive and silent observers to the violence around us.”

Both these campaigns are part of a movement gathering momentum around the world. Campaigns including UN Women’s He for She, Men Care and White Ribbon see the underlying cause of violence against women and girls rooted in gendered power inequalities. These movements promote an idea of masculinity that encourages respect and equality between all people.

CARE is calling for 2016 to be the Year of Engaging Men and Boys. We believe that putting discussions on gender equality on the national curriculum of schools is one way that we can reach young people to help prevent violence and bring youth of all genders into the movement for gender equality.

This is not a women’s issue, it is a human issue. No one should be a bystander.

This blog was previously published on the UK Foreign and Commonwealth Office website under the title There can be no bystanders: why gender equality and a life free from violence needs everyone’s support

More in this category: « Why cash alone is not enough: four main features of a broader market systems approach to SME development Refugee crisis: Has stopping migration become the sole purpose of the EU overnight? »