Linking Aid to Migration: A worrying direction of travel 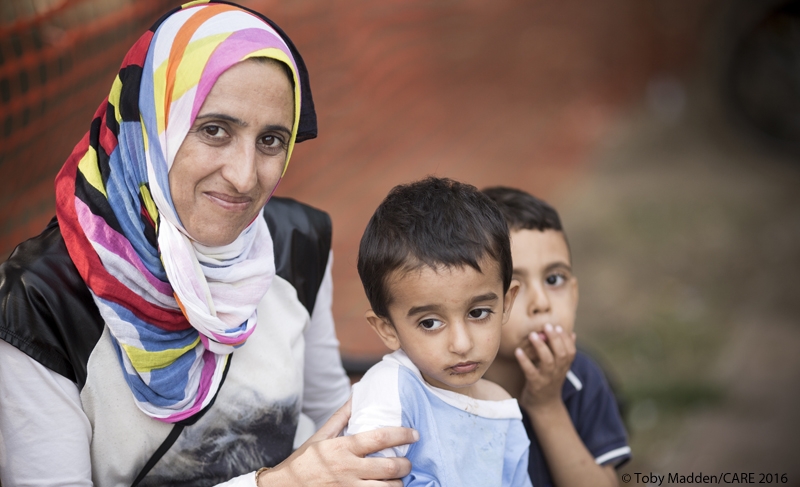 Dana (name changed) and her sons Mohammad (aged 4) and Abdulsalam (aged 2) in a park near the bus station in Belgrade, Serbia

Aid, including humanitarian aid, is increasingly being related to, and justified by, a goal to limit migration from poor and fragile countries to wealthier countries [1]. This is a problematic approach for several reasons, so how should humanitarian and development NGOs respond?

EU Trust Funds, though funded by official development assistance, were not established with a vision to reduce poverty or meet humanitarian needs or human rights, but to stem migration flows to the EU. “Addressing the root causes of migration” is a key theme of the UK Aid Strategy, and also features heavily in the 2016 Bilateral Development Review. Similar rhetoric, if not policy, is evident amongst other donor governments in Europe, North America and Australia.

While many of the approaches and priorities resulting from funding instruments like the EU Trust Funds can be welcomed (such as a focus on sustainable livelihoods, reducing conflict, addressing climate change, etc), there are some fundamental concerns about the focus on migration; not least the painting of migration as inherently undesirable and harmful.

The trend appears to be one of larger percentage of development and humanitarian funding being spent in migration-producing countries and regions, with the primary purpose to address the internal political challenge of migration, rather than necessarily helping the people most in need [2].This causes both a shift in the geographical allocation of development funding, but also on the selection of its beneficiaries. Funding from EU Trust Funds is partly disbursed based on the assumption that those who migrate are mostly young men, not the poorest people or women. Above all, the discrepancy with commitments to ‘leaving no one behind’ in the Sustainable Development Goals and the World Humanitarian Summit is stark.

Furthermore, donors are increasingly explicitly linking development and migration agendas in choosing how to allocate funding; potentially leading to situations where if there is no cooperation on readmission and return, then there will be no more development funding [3].

There are some demonstrable fallacies that underpin some of the thinking around using aid to discourage or limit migration [4]. Some of the main ones are:

“Countries such as Turkey, Pakistan, Lebanon, Iran, Ethiopia and Jordan currently host the largest refugee populations. Western societies, by contrast, receive a comparatively low number of refugees, and current numbers are anything but unprecedented. Currently, about 0.4 percent of the total EU population is a refugee. That figure hovered around 0.5 percent between 1992 and 1995.”

What does this mean for humanitarian & development NGOs?

Migration is unquestionably important. Even if it wasn’t, as limiting migration is currently a key theme of several major donors’ strategies, it is not easy to simply refuse to engage with it, or to avoid all funding with aspects of this agenda. It is however all too easy to just go along with it without question. There are some key things that humanitarian and development agencies must avoid if they are to navigate this highly political area without compromising on their principles and harming the very people they exist to help. They must not:

At a time when the US is separating children from their parents and locking them up, Australia is interning migrants on remote islands, the UK is deporting long-standing permanent residents and Europe is funding abusive Libyan coastguards to prevent people from travelling over the Mediterranean it is vital that humanitarian agencies take a clear stand and do not become complicit in increasingly outrageous abuses at home or abroad.

This blog was written with contributions from Inge Brees, Celine Mias and Chiara Cestaro.

As Head of Humanitarian at CARE International UK, I provide leadership on humanitarian issues and sit on CARE’s Emergency Response Working Group which provides strategic advice and direction for our humanitarian work. I also manage a team of technical advisors, including the global Emergency Shelter Team, Gender & Protection and Cash & Markets advisors, and a small Climate Change and Resilience team. Our team is a centre of learning in its various technical areas and provides both strategic and operational support to CARE’s humanitarian and resilience programming. Some projects currently underway in the team include Promoting Safer Building, the development of guidelines and tools for integration of gender equality and GBV interventions in shelter programming, and significant support to the BRACED programme in Niger.

Prior to taking up my current role, I led CARE International’s global Emergency Shelter Team, following on from a career as a chartered structural engineer with significant private sector experience in the UK and USA. I am a trustee of the Happold Foundation and Engineers Without Borders, and chair the Institution of Structural Engineers’ Humanitarian & Development Panel.

I am particularly interested in the tension between the priorities and relationship power dynamics of external humanitarian actors and disaster/emergency-affected people. I would like humanitarian programmes to become better at enabling disaster-affected people to control their own recovery and make their own, informed, choices about risks and their future resilience. I am also very interested in ensuring that humanitarian programming is gender-responsive and, where possible, promotes gender equality.

More in this category: « How to maintain your enthusiasm for the Grand Bargain (yes, really!) Social accountability for better education in Malawi: How community score cards helped turn a school around »