Home // Development Blog // #MeToo one year on, and seven myths that stand in the way of ending abuse

#MeToo one year on, and seven myths that stand in the way of ending abuse 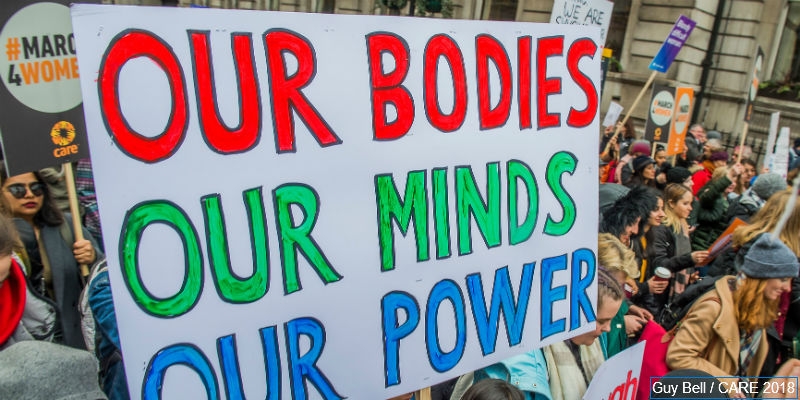 This week marks the one year anniversary of #MeToo, and the subsequent #AidToo movement. This transformed the global conversation, and put this critical issue high on the public agenda. I for one hope it stays there until we as a society and we as an industry overcome the power imbalances and gender inequality that underpin sexual exploitation, abuse and harassment.

As NGOs, governments, donors and corporates prepare to come together at the DFID safeguarding summit (18 October 2018) to agree concrete, cross-sector steps to end abuse in the aid sector, I reflect on seven myths – or more accurately, excuses – that crop up too readily in relation to sexual exploitation and abuse.

All of the revelations of the last 12 months have brought home the realisation of just how widespread sexual exploitation, abuse and harassment is across all sectors of society the world over. But that does not mean we did not know.

So if we did know, why wasn't more done about it?

We have to accept it was in some ways normalised. It simply wasn't taken seriously enough by organisations which are usually run by men. It was weighed up against other priorities including financial and reputational ones, and found to be less important.

At CARE we want to know if and when this is happening. This year we have been strengthening reporting systems like our CARE helpline, to try to make it easier for people inside and outside our organisation – both victims and witnesses – to report any incidents. (In fact, our Policy on protection from sexual exploitation and abuse – which all staff must abide by under the terms of our Code of Conduct – makes it an explicit requirement that our staff must immediately report any concerns or suspicions they have about sexual exploitation, abuse or harassment.)

We also need to ensure that people know about, and know how to use, the various ways that they can report incidents. So we are finding ways to talk more about the issue as an organisation. Through training sessions, communications and meetings we want to ensure that both staff, and community members in areas where CARE works, know how to report abuse and feel able to do so.

Myth 2. “It's expensive to prevent abuse”

As someone running an NGO that has to think about every penny we spend, I know that finding the extra resources we need to do a better job in preventing sexual exploitation abuse and harassment has been difficult. And we have increased spending on this and will ask all our funders to contribute to this.

Let’s be clear, this is fundamentally about protecting and respecting human rights. But it is worth noting that it’s a myth that preventing abuse is a cost.

CARE’s report on the cost of violence shows that it's the abuse itself which carries the heaviest cost. Protecting women from sexual abuse is not just the right thing to do (which is certainly the only reason we need) but, fundamentally, it allows them to lead their lives. And at work this means they are free to  be better workers – less absent and more productive. The global cost of violence against women has been estimated by the UN to be approximately 2% of the world's economy. That’s over $1 trillion!

There's been plenty of insistence over the last year that horrible incidents of sexual exploitation by men in various industries have been perpetrated by a tiny minority of men. But the truth is that those perpetrators have been protected by a wide patriarchy who do not understand how serious sexual exploitation is and who thought it less important to stop these abuses than their other priorities.

#MeToo showed that sexual harassment is experienced by virtually all women at some point in their life and by many women on a daily or weekly basis. It is certainly possible for one man to harass a large number of women, but with this many women experiencing harassment it is clearly not perpetrated by a tiny minority of men.

Myth 4. “A price worth paying”

Another myth which you hear is that some people thought it was worth putting up with the sexual offences of perpetrators because they're just so good at their job. I suppose Weinstein’s investors might have thought this, before they went bust. And there was a story on the front page of the Financial Times recently about lawyers who bring in the most business also being seen as worth it.

CARE does not believe this is ever a price worth paying.

In our humanitarian sector, it can be hard to find people to go and do difficult work in dangerous circumstances and often in remote communities. But that does not mean we should ever overlook concerns or downplay potential risks with the excuse that ‘we don’t have much choice’.

NGOs have been grappling with how to prevent people with a track record of sexual harassment, exploitation and abuse, from moving from one organisation to another. One issue has been that the law makes it very difficult to pass on any information about such people if they haven't been actually convicted of a crime.

But we think we can go much closer to the legal line. Already, at CARE International UK we have changed our rules around references – accepting and giving only references from HR officials who would be aware of any previous allegations of sexual harassment of fraud, explicitly asking about safeguarding risks, and carrying out DBS (Disclosure Barring Service) checks on all staff.

CARE is also supporting the creation of a new Inter-Agency Misconduct Disclosure Scheme.

Myth 6. “As long as we have good policies, we’ve done our bit”

There has rightly been a lot of focus on NGOs checking they have good policies in place, and in encouraging survivors of abuse to use those policies and report the abuse. But this is not enough on its own. It leaves all of the responsibility on survivors to prevent perpetrators from re-offending by reporting incidents.

The real responsibility is on organisations and their managers to prevent abuse in the first place.

We are campaigning for an ILO Convention that will make employers legally liable for any abuse or harassment suffered at work. We hope this will motivate employers and managers to develop effective strategies for preventing harassment, properly considering risks and warning signs, and stepping in early when unwanted behaviour is seen.

And within CARE, it’s fair to say that the recent spotlight on our sector has made us look again not just at ensuring our policies are as good as they can be, but actively making sure that they translate into practice.

That means building a culture of prevention throughout the organisational structure. At CARE International UK, we are training managers and staff specifically on how to prevent sexual abuse and exploitation. This month, we have provided a full one-day training course for 90 of our staff in our London office – that’s three-quarters of our staff, with the same training pencilled in for the rest. And we are also looking more generally at how to be more inclusive of gender and diversity of all kinds: just one of these initiatives is a comprehensive two-day training course on gender equity and diversity which all our staff have either attended this year, or will be attending in the coming months.

Because that is the culture we want – one which will prevent abuses of power.

It's common for organisations, companies, governments and charities to be worried what people will think if you share information about what goes wrong as well as all goes right. Indeed, Oxfam was one of the first NGOs to start publishing its data on investigations of sexual harassment by its staff.

But this year has shown that the true danger is not transparency but secrecy. Because if we are not open, we will not know the size of the problem. And people will assume you're hiding something.

If we're not transparent about our problems – of all kinds – why will people believe that we’re doing anything to prevent them?

And in particular why would survivors of sexual harassment report an incident to an organisation that doesn't demonstrate openly how seriously it takes such reports and what happens when it receives a report?

Transparency is one of the ways to assure survivors that reporting will make a difference, and publishing figures is one very concrete way of being transparent. This year CARE as a global federation published figures for the first time, in two separate categories: (1) sexual abuse and exploitation of community members and (2) sexual harassment within the organisation. And we have committed to doing this every year.

If the number of cases do go up, this could be an indicator that our efforts to encourage reporting are starting to work. Hopefully cases will then start to fall again as our efforts to prevent incidents also begin to work.

#MeToo and #AidToo have helped galvanise us as a global society across all sectors to do better, to expect more, and not to accept what is utterly unacceptable behaviour. Busting myths that are used as an excuse for doing nothing (or not doing enough), and being honest with ourselves, is the first step.

But this is a long journey to eradicating abuse, and we’re in it for the long haul.

More in this category: « Is the EU right to see the private sector as the ‘silver bullet’ to solve Europe’s migrant ‘crisis’? What follows today’s Safeguarding Summit? Ways forward on gender and safeguarding in humanitarian action »