Patriarchy is personal: How development workers in Nepal are shifting harmful social norms 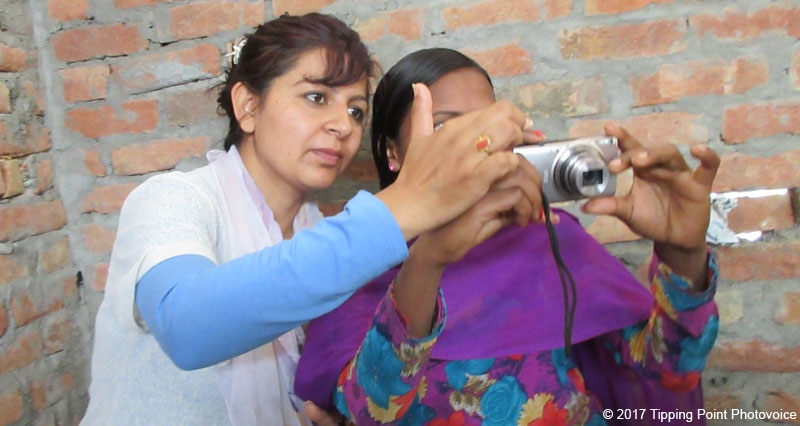 The example of Minakshi, a former child bride who has gone to become an activist and community-level facilitator for CARE’s Tipping Point project, is a reminder and inspiration for all development workers that real change is personal. We cannot work on projects seeking to shift harmful social norms without ongoing self-reflection around our own attitudes to gender and power, write Tirzah Brown and Yuleidy Merida.

By her own account, Minakshi’s childhood was filled with happy memories and love. She was her parents’ first child and her father’s favorite. She enjoyed going to school on a regular basis and playing outside with other children until she was 12 years old; this is when the restrictions related to her mobility and social interactions became not just ever-present, but overtly shaping her life in ways she could not control.

Like many girls in Nepal, Minakshi was married off during adolescence. Even before she was married, her goals in life were both few and shaped by expectations set for her as a girl: besides going to school and starting a family, what else was there to wish for? To move her life and her work with communities forward, Minakshi has chosen to reflect on her own life and how it impacts the work she is doing to end child, early, and forced marriage.

Marriage proposals started flooding Minakshi’s home when she was 14 years old. When her parents accepted one of them, they asked her if the person they had chosen was right for her. But what could a good daughter say? She remembers the religious leader who blessed their parent’s home after both she and her sister accepted the marriage presented to each of them by their parents and with it, the promise of a successful life.

Minakshi tried to continue studying during her marriage. She found time to read under the bedsheets only after fulfilling the day’s household chores that were expected from her, but she could only do this while her husband was asleep. If he woke up, she would stop so as not to disturb him with her light. After having their first and only child, she and her husband divorced.

Fifteen years have passed since Minakshi’s early marriage. Today, more than ever before, she does not believe marriage should be the only goal for adolescents. Rather, society should empower them to dream bigger. Minakshi divorced for better options, and when she wants to have a partner she will decide for herself.

Since her marriage, Minakshi has earned her master’s degree with her parents’ support and works as an activist and community-level facilitator for CARE’s Tipping Point project, which allows her to support her teenage son and affect change in communities like the one where she grew up. Through reflective dialogues and training sessions, Minakshi has gained insight from her own lived experiences – especially her early marriage, which she carries into her work so that others can learn from her experience without having to go through them. These dialogue and training sessions, that lift up our own lives and experiences, have prepared her to address the social norms that perpetuate early marriage in Nepal in a meaningful and credible way alongside communities she serves.

For development workers who spend their lives addressing issues of poverty and injustice, it is easy to overlook that real change is personal. Patriarchal social norms are enforced by external social systems and structures, but they are borne to fruition and acted out daily within our own homes and lives. Even if we have not gone through the traumatic experience of an early or forced marriage, we are all familiar with the workings of gender expectations that shape our lives. As active participants in cultures that favor people who identify with specific genders, ethnicities, or social classes, it is almost impossible not to internalize or be affected by biases, even as we work towards justice.

Recognizing this paradox, we as development workers should allow the work we do to have an impact on our own perspective and vice versa; in other words, the ongoing self-reflection of the development worker around gender and power is critical to genuine, credible, and impactful work with communities. A crucial first step is gender training that goes beyond simply explaining gender discrimination and uses interactive exercises to support staff to reflect and act, creating personal and collective commitments to challenging harmful gender norms in their personal lives.

For Minakshi, training and reflection on sexuality, power dynamics and masculinity have shaped how she reflects on her own life and applies it to her work. Trainings have helped Minakshi to confidently communicate with her family and colleagues about reproductive health and rights. She is now able to engage in persuasive discussions with colleagues and community members about choice, respect and dignity, and how gendered social norms affect women and girls in ways that are not abstract, but deeply personal.

However, we know transformation is often a slow and complex process, not something that occurs in one-time trainings. Self-awareness and bringing about change in Minakshi’s own family, for example, continues to be difficult. Over time, she has developed clear understanding and enough confidence to articulate the need to change specific social norms. To facilitate this process, Tipping Point staff collectively reflect on the project’s work and their own journeys. Through a culture of reflection, adaptation, and learning, the project can respond to emerging challenges and be more effective in addressing the context-specific norms and practices in their communities.

“We work with adolescents, and it is important to help them see that a lot of their issues and concerns about sexuality in their lives are, in fact, normal.”

Minakshi’s reflections hold an important lesson for our development community: if we want to facilitate transformation in society, we must first transform ourselves. Her personal journey empowered her to become an effective activist and inspired her to tackle the root causes of the many issues surrounding child, early, and forced marriage within her community. She uses this insight to help girls resist societal and family pressure to marry at an early age, all in an effort to help girls reclaim their voices to address wider issues in society.

Minakshi’s story is remarkable, but not exceptional. Her female colleagues went through similar personal journeys of transformation from which they emerged empowered to speak their minds. Minakshi is also inspired by her male colleagues who, as a result of broadening their understanding of the inequality that results from harmful gender norms, have positively changed their treatment of the women and girls in their lives. Community-level facilitators have become leaders in their community by striving individually and collectively as a team to model equality and dismantle patriarchy.

“[Our] transformation will be sustainable because this is not some technical kind of thing. Rather, all of [these changes] are related to [our] everyday life.”

True transformation of gender inequality cannot happen until it occurs at the personal level. It is not only about the communities where our programs operate, but also about ourselves. For those of us working in development, we must ask ourselves: are we willing to truly join the collective journey toward an end to patriarchy and injustice?

If so, we must commit to transforming the personal and professional by reflecting on our own experiences, beliefs and behaviors, and the way they influence our work.

I joined CARE in 2018 and I have appreciated working with people so passionate about gender equality. Before CARE, I worked for local organizations, where I designed and operated a career mentorship program for people who immigrated as refugees or asylum seekers to the United States and a trauma-informed adult education program for survivors of sex trafficking or sexual exploitation. When I am not working, I enjoy volunteering at church and with local organizations that mentor adolescent girls. One exciting thing I’ve done lately is attend a Social Analysis and Action training hosted by CARE Kenya, where I met field facilitators with an incredible amount of resilience and motivation to make the world a more just, safe place.

More in this category: « Gender-transformative adaptation to climate change: Let’s learn from evidence of what works Women’s rights: Emmanuel Macron’s “great global cause” must become a reality at the G7 »