Home // Development Blog // Preventing violence against women in Rwanda: what’s in a metaphor?

Preventing violence against women in Rwanda: what’s in a metaphor? 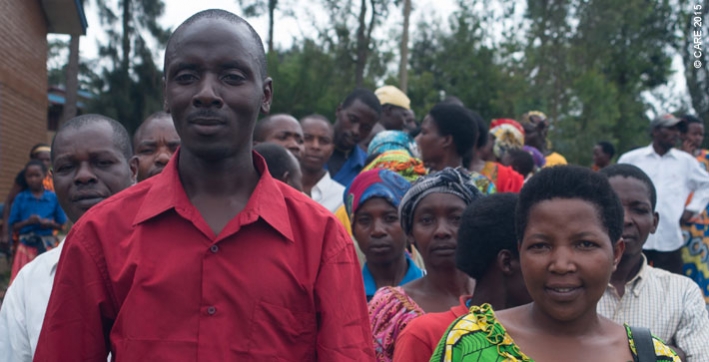 People attending the launch of the formal launch of the Indashyikirwa project in Musanze, Rwanda, in December 2015 © Franz Stapelberg

“Two God’s heads cannot fit in the same pot” says a Rwandan idiom used to justify why women cannot head households. The words we use to describe and talk about gender and violence matter. And yet, when it comes to designing research questionnaires or interventions, the power of language can be forgotten, in our haste to get a programme going. But the potential for real change perhaps lies in the tiny idiosyncrasies of local language, even though it often takes time to uncover such nuances.

Indashyikirwa: Agents of Change for Gender-based Violence Prevention, a DFID-funded project in Rwanda (part of the global What Works to Prevent Violence programme), recently went through a process of piloting its couples, women’s space facilitators and opinion leader curriculum, and found that making a few tweaks to the way ideas and concepts were phrased could have a big impact on the project’s success.

“It’s always so important to get some involvement and feedback on an intervention from the people it is meant to benefit,” Indashyikirwa Impact Evaluation Coordinator, Dr Erin Stern said. “Giving participants space to say ‘we did like this’ or ‘we don’t agree with this’ makes it more adaptable, more attractive to participants and ultimately more effective.”

Negotiating power in a relationship

The Indashyikirwa project is a 5-month curriculum designed to help improve the way couples negotiate power in their relationship to support healthy, equitable and non-violent relationships.

It is based on both the SASA! approach to community-building and Promundo’s Journeys of Transformation relationship skills curriculum and is being implemented by CARE Rwanda, the Rwanda Men’s Resource Centre (RWAMREC) and the Rwanda Women Network (RWN). To test it, 15 couples (30 people) were taken through the couples curriculum at a rapid pace, and asked to provide feedback in a series of gender-segregated focus groups. Several opinion leaders and women’s space facilitators were also taken through a condensed and adapted version of the curriculum and given an opportunity to collectively share feedback.

Amidst a range of feedback that came through the testing process, including the need to have two facilitators deliver each session, equip facilitators with support and counselling referral skills, and offer more comprehensive information on legal rights and responsibilities, facilitators also found an opportunity to connect the curriculum more to peoples’ lived realities and language.

“There are a lot of cultural metaphors, or different ways to say things in more appropriate ways, which participants shared to relate to the issues they were talking about,” Stern said.

“We can use context-specific sayings like ‘two god’s heads cannot fit in the same pot’ to start conversations which challenge the way people think about gender roles and decision-making. And we can also look at ways to make use of idioms that support gender equality, and to counter the idea that equality somehow runs counter to cultural norms and values.

“We can look at how to better incorporate Rwandan values of reconciliation and community mobilisation, and how gender equality is related to, and can complement those same values.”

Similarly, the green in the Rwandan flag is meant to represent progress, prosperity and development.

“We’re keen to use that as a way to open discussions on the economic costs of violence against women and girls,” Stern said, which is one of the themes covered in the initiative. “Preventing gender-based violence is good for development, and by reducing those costs has benefits for the community and broader society.”

“It’s interesting because in the training it seemed that couples were quite open to work on issues related directly to physical violence, but it can be harder to work on issues related to more subtle forms of gender inequality, like sharing household duties or equal decision-making. Using the right metaphors and idioms can be helpful to initiate such conversations, grapple with challenges, and frame issues in a way that stresses the benefits for everyone, men and women, that comes from gender equality.”

Ani Lamont is a media and communications specialist writing here as a consultant for the Indashyikirwa project.

More in this category: « The MasterCard Foundation: Why we’re signing the Linking for Change Savings Charter World Humanitarian Day – What does it mean to be a humanitarian in Europe? »