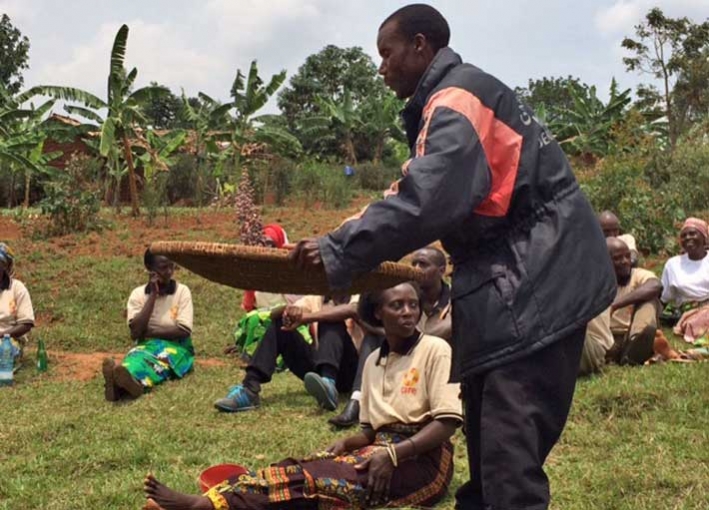 On arrival in Rwanda I was struck by a small but significant detail. There on a notice board advising people on the usual emergency services contact numbers was one for gender-based violence. This,  as I learnt  in the course of my visit, was no isolated gesture but one of a number of related ways in which Rwandans are challenging traditional gender roles as a way to address a culture of violence.

Rwanda is of course no ordinary country. Two decades have now elapsed since the cataclysmic events of 1994. While a significant amount of time has passed since the genocide, the deep psychological, societal and even physical scars are still very much in a process of healing.

But while the past can never be overlooked, Rwanda is not a country that has stalled. To the contrary, it is a place that seems determined to move forward. It has been politically and economically stable and has found innovative ways to deal with the injustices that were visited upon its people by its own citizens, through for example the people’s or Gacaca courts.

Now, it is exploring ways of tackling some of the deep-rooted sources of societal schisms, such as the causes of gender-based violence.

In the district of Huye, in the south-east of the country, there is a quiet movement for change taking root in villages and towns. I was accompanied by RWAMREC’s Co-ordinator, Silas Ngayanboshya, who told me he is proud to be part of a self-professed ‘men’s feminist organisation’, a partner with which CARE is closely working around a Men Engagement programme. Silas introduced me to men and women with whom they had been working to promote a different model of intra-household gender relations.

We sat outside the village mosque, in a very rural setting, where one might assume forces of deep conservatism would predominate, talking to couples about the change process they were part of. However, amongst the members of the ‘Enlighten’ group who we chatted to, the dynamic was anything but traditional.

The group initially came together in a Village Savings and Loan Association (VSLA), a tried and tested CARE-inspired approach which makes an important contribution to the economic and social well-being of its members. The VSLA also proved to be a safe space around which RWAMREC could broach some thornier issues. Here the Journeys of Transformation methodology CARE and RWAMREC have developed provides a basis to engage men and to have them explore their attitudes and the implications these have for others.

“I remember one day I had to go to the river to wash clothes. My wife was actually away having been selected to go on a government training course and I was left with the children. However I made a decision to take on these domestic chores. That day was hard since I was forced to answer many questions from women who were wondering why I was there.”

Over time Abdulkarim and some men like him have been able to embrace change positively. He and his wife Mariam now encourage their son to cook. “People always say the taste will be worse if a man cooks. We invited some friends over to taste the cooking of my boy and they couldn’t believe it. We tell them that in Kigali there are many men who are well paid cooks.” Abdulkarim runs a photography business from home. “I do my best to make the place welcoming. At first they laughed at me for sweeping the compound, but I told them that there are plenty of men earning good money cleaning the streets in town, so why shouldn’t I clean my compound for my customers?”

Abdulkarim and Mariam’s was not a violent relationship but there are those in the village whose are. Journeys of Transformation asks men to face up to their behaviour. Men are now standing up against gender-based violence in their community and there is clear evidence of positive change in this respect. Couples testified that their relationships have changed and that other positives come about as a result of a non-conflictual relationship. Men are more accepting of their women playing a bigger role around the economic well-being of the household, meaning that they have a freer hand in managing resources obtained through the VSLAs.

Programmes such as that I saw in Huye District are challenging entrenched attitudes and creating new role male models. This movement for change is being actively supported by the Government of Rwanda, and they are putting GBV squarely in the the public domain, as its helpline initiative shows. CARE will continue to be a partner in this effort by rolling out the Journeys of Transformation methodology in new parts of the country and in so doing will play its part in tackling the roots of violence as it takes place within the household.

We are also advocating for gender awareness and non-violence to be part of the school curriculum. Rwanda is doing what it can to address today’s problems, but a key part of ensuring that the problems of today and what came before are not revisited on families, communities and nations is to invest in the next generation.

More in this category: « Micro-franchising for development: The example of Krishi Utsho in Bangladesh Why I became an Advocacy Intern at CARE International UK »