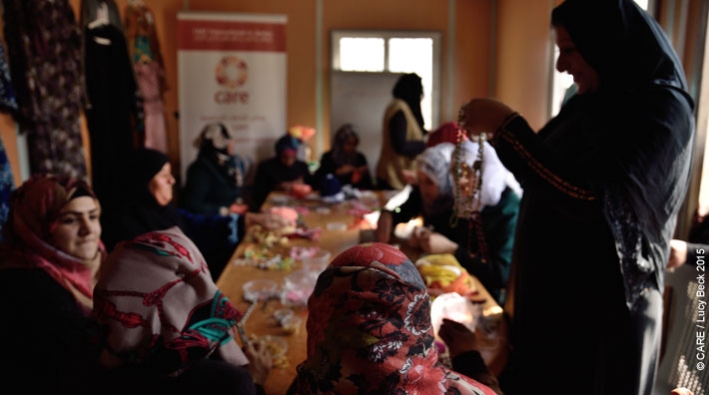 Syrian refugee women and local Jordanian women from the town of Azraq meet at a CARE-run community centre at Azraq camp, Jordan, for vocational training in jewellery-making and soap-making

Ahead of the Syria conference in London in early February, donors and governments in the region are working closely to agree a new plan for responding to the refugee crisis in the region. The private sector will be critical to its success.

On 4 February the eyes of the world will turn to London, as the British government co-hosts a major pledging conference on the Syrian regional crisis. However, money will not be the sole topic of conversation. This meeting of leading donors, diplomats and political representatives will also be an opportunity for a support and recovery plan for the Middle East to be drawn up, that puts refugee rights at its heart.

Between them Turkey, Jordan and Lebanon have been rightly praised for bearing the brunt of the refugee crisis, hosting over four million refugees, and spending billions of their own money on supporting the crisis alongside the international community’s response. However, as the conflict stretches on and refugee coping strategies are depleted, a new approach is required.  As part of a new settlement, more investment from donors should be matched by reforms by host governments lifting critical restrictions on refugees which currently prevent families and individuals from helping themselves or the countries they are sheltering in.

The promise of making a real difference to the lives of those fleeing the conflict in Syria is why I am so excited about a roundtable that CARE is hosting in partnership with DFID, the Ethical Trading Initiative and Business Fights Poverty on 21 January. As part of the preparatory work for the main conference, this discussion will explore precisely how private sector actors can bring their expertise and investment potential to bear on what some are calling a Marshall Plan for the Middle East, and identify practical options for discussion in at the conference in two weeks’ time.

Here are three ideas that I’m keen to hear tabled:

1. For refugees to access livelihoods, they first need to feel safe and confident about their basic rights being protected and their right to stay.

Globally, one in every 122 humans is now a refugee, internally displaced or seeking asylum, and according to the UNHCR, on average every day in 2014, 42,500 people became refugees, asylum seekers or internally displaced. However, despite people fleeing to all parts of the globe, not every country guarantees their full rights under international law, and the fear of arrest or forcible return puts already traumatised people under significant strain. In the Middle East, regularising the status of refugees and then simplifying, speeding up and reducing the cost of applying for work permits will make an immediate difference to millions of families, and will allow private sector firms to hire many more of the highly qualified refugees in the formal economy.

2. Generating jobs for refugees and host communities is important, but we need to make sure this brings ‘decent work’, mitigate against the risk of exploitation, and ensure social cohesion.

There are a number of ideas being discussed concerning what incentives would encourage private sector firms to invest in the region or expand their operations, from tax relief to subsidies. Investment would bring with it opportunities for both refugees and workers from the host countries, and this is necessary to help prevent tensions arising between communities, sparked by a sense of unfairness. However, incentives must not be at the expense of undercutting worker’s rights, or protections against exploitation and child labour. CARE is already working in ‘Special Enterprise Zones’ to ensure labour standards are upheld, and we are keen to ensure that decent work remains a watchword for job creation. However, as the ILO pointed out, as long as most refugees work illegally there will be little incentive for employers to improve their wages or working conditions (with the garment sector coming under particular scrutiny).

3. Refugee women face specific challenges in accessing livelihoods, and so gender needs to be factored into strategies at the conference.

We already know that gender is one of the most critical determinants of vulnerability for refugees. For example, men and women face varying constraints on their freedom of movement due to security concerns.  This is no different in terms of livelihoods and job creation, where women may not be able to work away from home because of childcare responsibilities. Female-headed refugee households in Lebanon, for example, are less likely to have residence permits and may face higher risks of exploitation and abuse.

While formal job creation needs to be gender sensitive, including ensuring that vocational training is accessible to women, other solutions can focus on allowing refugees to start their own businesses which they can run from home. Here banks and other financial institutions have a role to play in ensuring they have the right products to support micro-entrepreneurs and small businesses.

CARE’s work on women’s economic empowerment puts us in a good place to broker conversations between private sector organisations, civil society and state actors on how the market can support refugees in crisis settings. With the Syria crisis entering its sixth year in March, only a comprehensive solution which brings the private sector on board can ensure refugees have the protections and opportunities they need to outlast the crisis that has engulfed them.

This roundtable discussion, hosted by CARE, DFID, the Ethical Trading Initiative and Business Fights Poverty, could be key to ensuring we get there.

More in this category: « Scale, impact and partnerships – getting beyond the buzz-words to real action Mixing with the one percent at Davos: How to ‘improve the state of the world’ through financial inclusion »