Home // Development Blog // Tackling policy failures on #WorldRefugeeDay and beyond 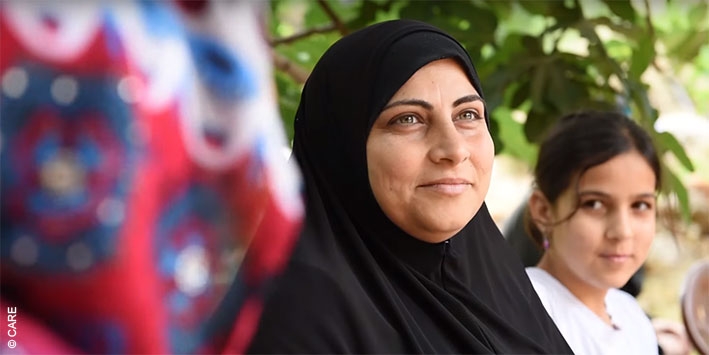 In a new short film launched on #WorldRefugeeDay today, CARE documents how one woman, Hanaa from Lebanon, reached out to support Taghreed, a refugee from Syria; how their families now live as one; and how both women have come to love each other as sisters. Three minutes long, it’s a powerful call to action for the rest of us living in much wealthier countries to show the same generosity.

One of the most remarkable things about the current global refugee crisis is the extent to which ordinary people have mobilised to support people fleeing war, persecution and crisis. Similar community-to-community support is happening around the world, and as CARE we support these efforts in countries as diverse as Pakistan, Germany, Canada, Kenya and Greece.

But the responsibility for supporting refugees is ultimately that of governments, and it is governments which have fallen woefully short.

In under three months, world leaders will gather in New York for two major summits – a summit of the UN General Assembly (UNGA) on 19th September on refugees and migrants co-hosted by the Governments of Jordan and Ireland; and second, a Summit on the Global Refugee Crisis, hosted by President Obama on 20th September. Today, CARE publishes five recommendations towards those Summits and calls on governments to act on these.

Below, I outline five flaws in the current approach to refugees by governments, and then summarise our five recommendations to tackle these.

Each of these challenges is within the power and resources of governments to address. Towards the Summits in September and beyond, governments should consider the following five recommendations:

We need governments to deliver on each of the above towards the Summits in September and beyond [1]. The challenge is not one of politicians lacking the technical know-how or information, but rather they lack political will. To overcome this, we need to show governments that ordinary people – their voters – care. On 12th September last year, tens of thousands of ordinary people came out into the streets shocked by the images of Aylan Kurdi and calling on their governments to do more on the “#REFUGEESWELCOME” marches. There is talk of another major global day of citizen action being convened before the Summits in September. CARE will again be there, and we will look for other creative ways to mobilise our supporters to show heads of state that the public cares about these issues.

World Refugee Day is just one day, but the discrimination, poverty and suffering faced by refugees like Taghreed is a daily experience. It is a deeply disturbing that the current response of so many wealthy governments risks unraveling everything that has been learned about how to protect and assist refugees, and the rights agreed in the UN Refugee Convention. While today this impacts people from Syria, Somalia, Afghanistan, who knows who else this might affect in the years to come, including closer to home?

So on World Refugee Day please help us share the stories of Hanaa and Taghreed, as well as the policy recommendations between now and the Global Summits. Last year CARE delivered aid to over five million displaced people and there are thousands of people in local groups and networks helping out too. Voluntary activists and NGOs can go so far in assisting people fleeing for their lives. But now we need Governments to step-up to exercise their responsibilities.

[1] A ‘zero draft’ outcome for the Jordan/Ireland UNGA Summit will be circulated by end June, and the final outcomes negotiated by end July. For the Obama Summit, the process runs up until the Summit itself to rally strong commitments by states to host refugees and fund the wider response.

More in this category: « Investing in peace in South Sudan UK BIS Department review of corporate responsibility fizzles out in non-report »