The madness of climate change inaction 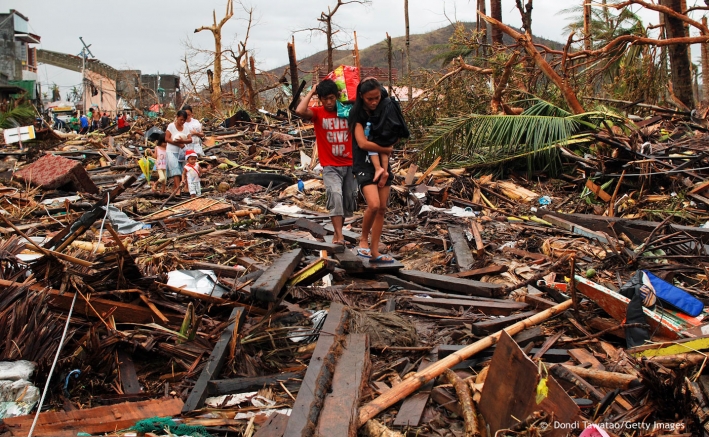 Climate change negotiator Naderev Sano made global headlines this week when he spoke about the devastation wrought by Typhoon Haiyan in the Phillippines. In his address to delegates at the UN climate talks in Warsaw, Poland, he said the world's inability to rise up to the challenge of climate change was 'madness'.

Since the very first meeting of Conference of the Parties to the Framework Convention on Climate Change in 1995, the annual high-level climate talks have been called many things – ineffective, dull, a waste of money and a jamboree - but the slow pace of progress is rarely criticised in public with such heartfelt fervour.

The view from survivors of Super Typhoon Haiyan

Sano, though, has every reason to be deeply passionate about the need for urgent action in Warsaw. His hometown of Tacloban, in the Philippines' Southern Leyte province, suffered immeasurable losses when the Typhoon hit land in the early hours of Friday morning. Fighting back tears, Sano described how his brother had 'gather[ed] bodies of the dead with his own two hands.'

Here in Warsaw, the impacts of that speech have been palpable. Sano's impassioned words – and his voluntary fast until 'meaningful action' is taken to address climate change in Warsaw – have helped inject new emotion and a renewed sense of urgency into the talks.

The fact is, Yeb Sano couldn't be more right. The UN climate talks urgently need to deliver renewed ambition if the world is to agree on a new, fair and binding global climate change agreement by 2015. Current levels of action to reduce and mitigate the effects of greenhouse gases are woefully inadequate given the alarming scale and pace of climate change, which now puts the world on a pathway towards 4 or more degrees Celsius of average global warming if emissions continue at current levels.

Money and resources available for adaptation are in particular crisis. Financing for the Adaptation Fund, which supports projects and programmes to help developing countries adapt to the negative effects of climate change, is drying up as carbon prices drop. The newly established Green Climate Fund, which contributes to achieving goals set by the international community to combat climate change, has received no money to date. While other adaptation funds administered by the Global Environmental Facility still lack the resources they need to implement effective adaptation measures in countries suffering the worst impacts of climate change.

Meanwhile, climate change impacts continue to unfold at an alarming rate. Not only are rising global temperatures leading to increased frequency and intensity of extreme weather events, but changes in rainfall and heat levels are also dramatically affecting crops, water availability and vegetation cover in complex and unpredictable ways.

In countries where CARE works, such as Nepal where I come from, changes to the South Asian Monsoon season are having significant consequences for millions of people who depend on agriculture to feed their families and make a living. Unpredictable rainfall is causing increased flooding one season and droughts the next. Higher temperatures are resulting in crop failures, glacial melt and the disappearance of snow packs.

These impacts are effectively wiping out savings, causing loss of life and significant damage to and destruction of assets, including property.

At the same time, they are undermining people's ability to deal with and recover from recurrent crises. People living on the margins of society and who are already poor, are hit the hardest, even though they have done the least to cause the emissions which drive climate change. It's an extreme global injustice.

The UN climate talks in Warsaw must not fail to make progress towards an ambitious global deal to curb and mitigate the effects of existing greenhouse has emissions, help the world's most vulnerable communities adapt and work out ways of dealing with the loss and damage which is already occurring as a result of climate impacts.

If governments don't act now, this growing litany of extreme weather events and devastating storms, floods and droughts will soon become the new normal. If we're prepared to accept that, then Yeb Sano's right. There's no other word for it: madness.