Home // Development Blog // Those with less who save the most: How savings group members become bank customers in Tanzania

Those with less who save the most: How savings group members become bank customers in Tanzania 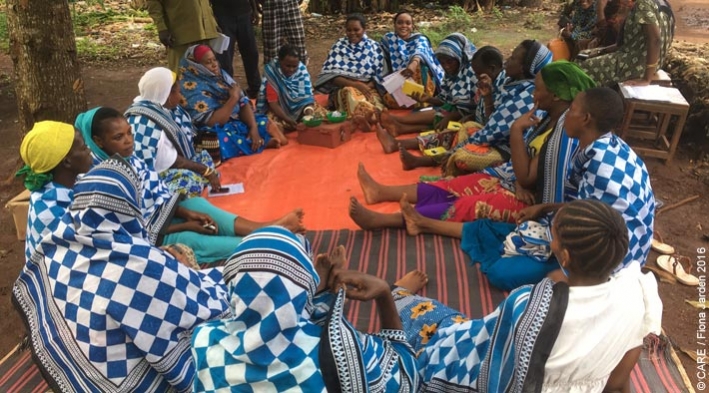 A meeting of the Tushikamane Paris savings group

In Tanzania a group has gathered to purchase shares, grow their savings, access loans and do their book-keeping. Regular financial sector activities, but with a difference. These are the activities of the Tushikamane Paris group – an informal savings group of 24 women and 6 men from the hinterland of Zanzibar, Tanzania. Many from this community live on the poverty line, although some manage to make a little extra cash through selling surplus vegetables, crafts or making and selling snacks, amongst other small-scale enterprises. Despite having very limited funds, members of the Tushikamane Paris group manage to grow their savings every week, without fail.

No one is too poor to save

Observing this group reminded me that, irrespective of background, no one is too poor to save.

While I was observing, the Tushikamane Paris group were gathered on a mat under the shade of a tree to conduct their meeting, all the time adhering to a set of self-created, incredibly rigorous rules designed to ensure they stick to their aspirations of growing their savings and keep the dealings transparent. On the day I observed, the group added 300,000 Tanzanian shillings to the existing 4.7 million shillings (2,175 USD) already saved in a locked box. Across the Unguja (Zanzibar) islands there are a thousand more groups like this one, and 20,000 across Tanzania, mostly made up of women.

Tushikamane Paris group were supported by CARE Tanzania through the Village Savings and Loan Association (VSLA) initiative. Through local community-based trainers funded by CARE, the group are taught financial literacy skills, and develop money management capabilities based on participating in the transparent, structured and democratic group savings and loans scheme.

While observing I was struck by their total commitment to save. It was clear; they took their participation in the informal savings group seriously. These (mostly) women were incredibly professional, rigorous and displayed such discipline toward growing their finances that they rivalled some of the best money managers I have come across. It was inspiring.

Therefore my second take-away message from observing was that these members seem like ideal clientele for the banks. After many months of rigorous saving, the Tushikamane Paris group last month linked with the national Microfinance Bank and opened a group savings account, which now holds the equivalent of a couple of thousand USD.

Through their informal savings group participation they had proved to themselves an ability to make regular savings deposits, and understand concepts such as buying shares, repaying loans and book-keeping skills. They are also incredibly strict about it all. Like many other savings groups, the Tushikamane Paris group apply fines to members who forget the rules of their constitution, are late to a meeting or default on loan repayments. They also fine each other if someone talks while the money is being counted!

All too often low-income earners face the greatest barriers to opening bank accounts, including unpredictable incomes, living in remote areas away from branches, and a lack of identification, all of which inhibit them from opening bank accounts. Around 77 percent of those living on less than $2 a day remain unbanked, dependent mainly on informal savings and loans, moneylenders (sometimes unscrupulous), friends and family to resolve their financial needs.

Globally there are 11.5 million people actively participating in informal savings groups. The methodology has been proven to support women to grow businesses, guard against economic shocks, and connect to the formal financial system. It can also create gender transformative outcomes, including giving women increased control over financial resources and an increase in women’s voice and decision-making power in the home and at community levels.

How do Village Savings and Loan Associations work?

Fiona was formerly Senior Policy and Advocacy Advisor - Financial Inclusion for CARE International. She describes her role below:

I support CARE’s work to enable women and girls to have equal and increased control over their financial resources and access to financial services. My role is to ensure institutions like banks and governments adopt policies to bring women living in poverty into the realm of financial inclusion. Since joining CARE I've been leading the development of CARE’s global financial inclusion multiplying impact strategy, and have worked with CARE offices in South Asia and Sub-Saharan Africa to influence financial inclusion policies and practices in these regions. I'm a member of Women Advancing Microfinance, GADN’s Women’s Economic Justice working group, and SEEP’s Savings Led working group.

I have previously lived and worked in remote Australian aboriginal communities to address the barriers families face through financial exclusion and generational poverty. I've also worked with banks to strengthen their ability to link with poor rural customers and I was an advisor for the Permanent Mission of New Zealand to the United Nations. I have an MA in International Development with a specialisation in development economics from the University of Newcastle, Australia, and a journalism qualification from the University of Canterbury, New Zealand.

Radical Hope by Noel Pearson. Noel is the chief architect behind a radical new approach for social change and development for disadvantaged indigenous Australians. Having worked with him for years he is equally as brilliant and inspiring as he is controversial. In this book he turns his thinking to education with new ideas for transforming the lives of the disadvantaged to ‘raise up the many’ and ensure ‘no child is left behind’.

More in this category: « Resilience and market systems: What we can learn from resilient markets in Ethiopia Major opportunities to scale up access to formal finance in Tanzania »