Transforming the future of work for gender equality: What’s happening in Asia? 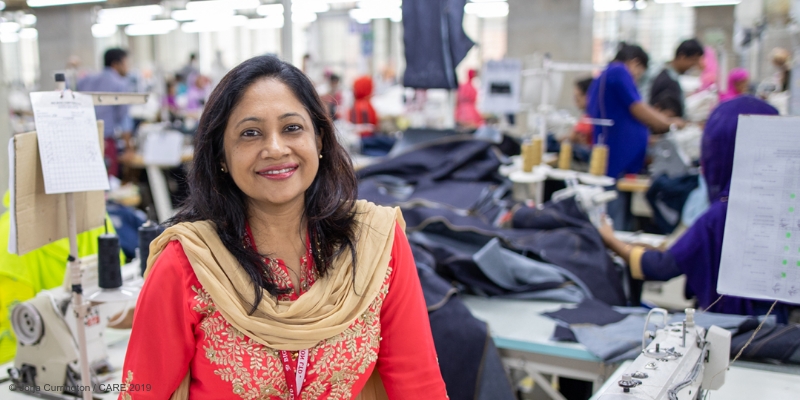 Jannatun, General Manager of HR & Compliance at a factory in Bangladesh, wants to get more women into leadership roles

The Asia Pacific region has both the world’s largest proportion of workers in the working-age population and the world’s lowest unemployment rate. However, only 44.5 per cent of women are employed and for those who are working, access to dignified employment opportunities remains a challenge. Discussing the opportunities that exist to ensure the world of work is gender equal was the focus of the side event Transforming the Future of Work for Gender Equality at the recent Asia-Pacific Ministerial Conference on the Beijing+25 Review in Bangkok.

I joined others, including Anna Lee Fos-Tuvera from CARE’s partner the International Trade Union Confederation Asia Pacific (ITUC-AP), on a panel highlighting the opportunities that exist and how we can capitalise on these in the region. Some key themes emerged.

Strengthening women’s voice, representation and leadership is increasing the gender-responsiveness of workplaces and unions

The future of work poses huge challenges for women, yet women themselves are extremely under-represented in leadership positions and don’t have an equal voice in the decision-making processes that will influence their futures.

This situation is true in many different settings and organizations, from businesses to worker organizations. In the garment industry, CARE’s research in Bangladesh found that women workers see gender discrimination within their factories, but in most cases feel they lack channels to speak up about this or their voices are not heard by leaders, including to worker representatives. Further research has also found that in some countries men are three times more likely than women to hold supervisor positions.

However, the experience of CARE and our partners shows that it is possible to support and enable women’s voice, representation and leadership, in and outside of workplaces, to ensure their rights are respected.

In garment factories in Bangladesh, CARE’s work to strengthen legally mandated worker participation committees resulted in an increase in the number of women workers raising issues and concerns, with more than 90% of workers reporting that their factory provided an environment in which they were able to raise grievances and demands. In communities, CARE’s Empowerment, Knowledge and Transformative Action (EKATA) groups have been shown to build solidarity and political agency, and catalyse collective action of female workers to claim their rights.

During the discussion, ITUC-AP also shared how their affiliate trade unions across the region are increasing the number of women in leadership positions within the trade union movement, a trend CARE has worked to support and which may hold the key to more gender-responsive unions and collective bargaining agreements. Much more needs to be done, but there are promising signs of gender transformation within the workers’ movement and beyond which will be vital for ensuring gender equity in the future of work.

Women are using their collective voices to fight for change and are putting the issues and challenges faced by women firmly on the agenda.

In particular, the global #MeToo movement has brought much needed attention to the issue of violence and harassment in the workplace; a global injustice which has been hidden and under-reported for too long. CARE’s experience shows this issue spans numerous countries and sectors across the region and in different sectors – we have seen this raised by women including EKATA groups around factories in Bangladesh, a Labor School of female union leaders in Indonesia and beer sellers in Cambodia.

The emergence of women leaders and demands for action by women workers is supporting a notable transformation within worker organisations, which are increasingly responsive to these concerns and taking action through negotiation, bargaining and advocacy. For example, in Myanmar, CARE has partnered with the Confederation of Trade Unions in Myanmar to provide training and technical expertise on violence and harassment in the workplace. As a result, we have seen female union representatives investigate and raise complaints of sexual harassment to management and insist that anti-harassment clauses are integrated into employment contracts.

Collaboration is helping movements capitalise on new opportunities for change

We’ve already seen the impact of bringing together women’s movements, CSOs, employers and government representatives to focus on gender equality issues in the workplace. Concerted advocacy efforts in countries across Asia supported the adoption of the ILO Convention on Violence and Harassment at the International Labour Conference in June 2019. Partnership between trade unions and CSOs enabled tripartite dialogue to happen in a number of countries and ensured that the voices of women leaders were heard at the national level and directly at the International Labour Conference in Geneva. These coalitions also helped ensure the issue of harassment in the workplace is on the agenda of a number of national law revisions. More detailed examples of this are available in the recent Impact Report from Made by Women.

This is a pivotal moment for turning the new global standard into a reality by encouraging ratification of the Convention by national governments. As Anna from ITUC Asia Pacific mentioned during the discussion, it is important for partners to continue to push for ratification at national level and ensure this global legislation translates into national action which will have a positive impact on the lives of working women.

With this increased focus on violence and harassment in the workplace, businesses are becoming aware this is a key barrier to women’s full and productive engagement in work. It contributes directly to the gender wage gap and losses in earning potential, as well as having significant outcomes for employers and national economies, totaling billions of dollars annually in lost productivity (see this report on the annual cost of sexual harassment to the Cambodian garment industry for further details).

Forward-thinking employers aren’t waiting for governments to ratify the ILO Convention. Many are already exploring how they can align to this global standard to ensure respect for human rights in their business operations and supply chains, such as the group of garment sector leaders who recently gathered to discuss practical solutions for the industry. An increasing number of tools have emerged to support businesses with this challenge, from Business Fights Poverty’s new GBV Toolkit for Action to the open source materials available from the Empower@Work Collaborative.

What next steps will help transform the future of work for gender equality?

CARE’s focus on gender equality in Asian workplaces is supported by Made by Women, CARE’s Impact Growth Strategy focused on economically empowering women working in the garment industry through dignified work. To learn more about the strategy visit care.org/madebywomen.

I provide technical expertise for CARE globally on Dignified Work – CARE’s strategy for promoting access to gender-equitable, economically empowering jobs for women – with a focus on Asia. I joined CARE in 2016 and have led the development of our theory of change for Dignified Work and a regional Dignified Work strategy for Asia. I support CARE’s country offices with strategy development, new partnerships, programme design, knowledge management and learning.

Before joining CARE, I worked as an ethical trade consultant for three years, managing programmes across Asia and Africa to improve working conditions in global supply chains including: garments, footwear, electronics, home-furnishings and horticulture. I started my career in the international trade union movement, providing research support to global and national level trade unions.

My current priority is launching our new strategy on Dignified Work in Asia, focusing on improving women’s leadership, collective voice and representation in the garment industry.

There are a few books I always refer back to whenever I feel too caught up in the detail to see the broader picture. Ha-Joon Chang’s Bad Samaritans: The myth of free trade and the secret history of capitalism debunks the myth of free trade as a model for economic development; whilst Ronaldo Munck’s Globalisation and labour: The new “Great Transformation” is essential reading for anybody who wants to understand the impact of globalisation on work, economics and politics.

More in this category: « Sexual harassment in the garment industry: What happens when you bring people together to look at solutions rather than problems? The UK government is at risk of failing our first 100 day tests on equality, climate and development »