Home // Development Blog // UN report on women’s economic empowerment: The right thing – and the smart thing – to do

UN report on women’s economic empowerment: The right thing – and the smart thing – to do 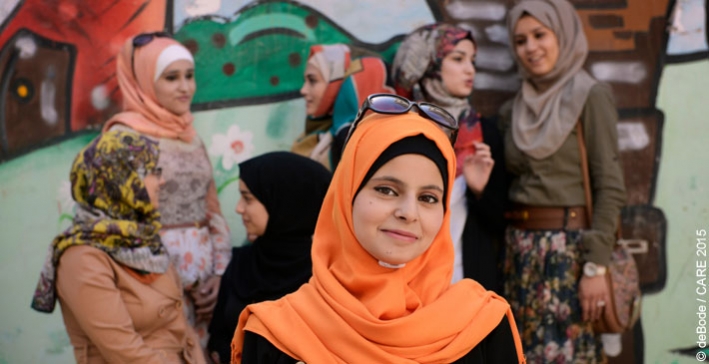 Young women members of a Village Savings and Loan Association group in Jordan, supported by CARE in a programme in partnership with the H&M Foundation

Thursday 22nd September at the United Nations General Assembly was a tremendous moment for the global women’s economic empowerment agenda. Not only did Ban Ki Moon become the first Secretary General to declare himself a feminist (for which he received a rousing standing ovation), it was also the launch of the first report by the UN Secretary General’s High Level Panel on Women’s Economic Empowerment.

It is fantastic that CARE’s Village Savings and Loan Associations have been recognised in the report as a ‘multi-dimensional approach to financial inclusion for poor women’ (p.73). These savings groups comprised mostly of women have been run by CARE since 1991, and now many organisations are supporting 11.5 million people worldwide to save, grow businesses, guard against economic shocks, and connect to the formal financial system. See my blog here for more on the life-changing impacts of savings groups.

What’s in the report

The report lists a lack of financial, digital and property rights among four overarching systemic constraints to the economic empowerment of women. The other constraints include: adverse social norms; discriminatory law and lack of legal protection; and the failure to recognise, reduce and redistribute unpaid household work and care.

In response the UN High Level Panel members have identified ‘seven primary drivers’ to make rapid change, accompanied by a call to action for all sectors (especially governments) to act now, by:

CARE welcomes the report because urgent global action is needed to address the long list of economic and gender barriers stopping women from realising their full potential (see CARE’s women’s economic empowerment strategy for detail). No more can widespread and persistent gender gaps in women’s economic opportunities and rights be tolerated.

This is why, at the launch of the HLP report at the UN headquarters, we voiced our commitment to ensure 30 million women have greater access to and control over economic resources by 2020. We’ll do this through our ongoing work strengthening women’s role as producers, workers, entrepreneurs and consumers.

To make real change in the lives of women, we need recommendations grounded with gender transformative approaches. The report has been criticised as too one-dimensional – including policy recommendations – and yes, it’s better to have them like this than not at all; but if social norms lag behind, nothing will change for women’s equality.

Why the need for a report?

At the moment the global community is way off realising the concrete Sustainable Development Goal targets for gender equality by the year 2030 – of which women’s economic empowerment is considered central for achieving inclusive growth.

Secretary General Ban Ki Moon called for this report back in January 2016 in order to rapidly accelerate progress and mobilise the global community to expand women’s economic opportunities, to ‘move from the pages of UN documents into the lives of women’ and achieve the SDGS. As the report puts it, women’s economic empowerment is:

the right thing to do and the smart thing to do: gender equality is a matter of basic human rights, and women’s economic empowerment can generate huge gains for human development, economic growth and business

Huge gains for human development, economic growth and business: that’s what we call a win-win-win. Now it’s time to make it happen.

Fiona was formerly Senior Policy and Advocacy Advisor - Financial Inclusion for CARE International. She describes her role below:

I support CARE’s work to enable women and girls to have equal and increased control over their financial resources and access to financial services. My role is to ensure institutions like banks and governments adopt policies to bring women living in poverty into the realm of financial inclusion. Since joining CARE I've been leading the development of CARE’s global financial inclusion multiplying impact strategy, and have worked with CARE offices in South Asia and Sub-Saharan Africa to influence financial inclusion policies and practices in these regions. I'm a member of Women Advancing Microfinance, GADN’s Women’s Economic Justice working group, and SEEP’s Savings Led working group.

I have previously lived and worked in remote Australian aboriginal communities to address the barriers families face through financial exclusion and generational poverty. I've also worked with banks to strengthen their ability to link with poor rural customers and I was an advisor for the Permanent Mission of New Zealand to the United Nations. I have an MA in International Development with a specialisation in development economics from the University of Newcastle, Australia, and a journalism qualification from the University of Canterbury, New Zealand.

Radical Hope by Noel Pearson. Noel is the chief architect behind a radical new approach for social change and development for disadvantaged indigenous Australians. Having worked with him for years he is equally as brilliant and inspiring as he is controversial. In this book he turns his thinking to education with new ideas for transforming the lives of the disadvantaged to ‘raise up the many’ and ensure ‘no child is left behind’.