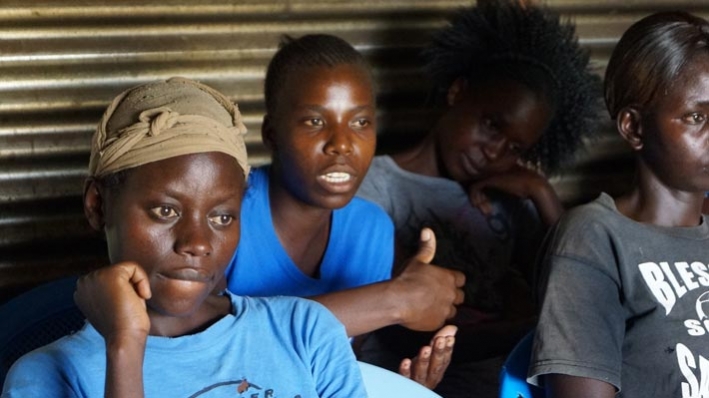 Milca (background, centre) makes a point during a meeting of her VSLA group © CARE Kenya/Job Mainye

Village Savings and Loan Associations (VSLAs) are a key way to provide access to financial services for people living in areas which financial institutions typically ignore and where the cycle of poverty prevails. They do exactly what their name suggests: provide a way for a group of individuals in any community to save their money and to access loans. But the benefits don’t stop there: later on, VSLAs also serve as an onramp to formal financial services.

So how does this work for a typical VSLA member? Milca is a 24-year-old woman in Kobodo, a small town in Homabay District, Kenya. She is married with two young children and had been meeting her family’s basic needs solely on her husband’s income. Milca has hairdressing skills which she knew she could use to make some extra income, but she could not afford to start a business to use her skills.

Milca finds it very hard to save large amounts on a very small family income on which there are always lots of planned for as well as unexpected demands. She and her husband do not have, nor can afford to have, a bank account, and they have no access to borrowing money. Milca is like the 2.5 billion unbanked people across the planet, with no access to formal financial services. However, through the VSLA approach, Milca has put herself on a ramp to be able to access financial services appropriate to her needs and what she can manage.

In March this year, Milca joined a VSLA set up with support from CARE. Milca along with two dozen others selected themselves and formed the group. The group was accompanied on a weekly basis by a trainer who taught them how to set up their group’s governing council as well as how to designate the reasonable minimum amount that each member could save on a weekly basis.

Through this group, any member was able to put aside savings equivalent to 5 pence each week or as high as 25 pence, according to the extra cash they had available for savings that week. Some groups set higher amounts but the group Milca joined felt that a minimum of 5 pence was the right amount for them. The members pooled their savings on a weekly basis. The members also contribute a small sum to a compulsory fund which is used to deal with emergencies faced by members. These are given as grants or as zero interest loans to any member in distress, decided on a case-by-case basis.

The saving process is quite formal: each group has their own special cash box, which has three padlocks, each with a separate key, each held by one of the three key-holders nominated by the group. The rules are strict: the group agrees that the box can only be opened at their weekly group meeting. Everyone’s savings are tracked by allocating them shares which are recorded in the VSLA ledger and their personal passbook.

Members of the group now have a methodical way of saving on a regular basis. The weekly pooled savings form a loan fund, from which members can borrow money at a rate of interest they themselves have set. All a member has to do is state the nature of their loan request and the amount needed and their peers serve as a loan review committee. Collectively they decide whether it is a good idea for their money to be invested in a small enterprise – or sometimes for meeting other needs – or if the repayment proposition for the loan is strong enough to ensure that it will be repaid. So Milca persuaded her group to lend her the money that she needed to start her hairdressing business. After giving out loans to multiple members, at the end of an agreed time period (often a year), the interest from the loans is then divided up among the group members in proportion to their shares – so the group members get a good rate of return on their savings.

After years of engaging in weekly savings and loans, the group funds grow so that they often give rise to security worries. Accessing other financial products can also become a concern for some members.

This is when groups start to look to a formal financial service provider to access a bank account to keep their funds safe. Also the account can help the group develop a financial identity and access other financial products offered by the bank such as credit. As some of the members start developing their micro-enterprises, their credit needs become larger and more complex than what their VSLA can offer.

As an individual, maintaining a bank account can be quite expensive given the amounts deposited and the transaction costs in accessing an account, whether it be distance or the actual fees. However, accessing an account as a group spreads the cost over two dozen or so people, making it much more affordable.

CARE therefore works with international and national banks and regulators to break down the barriers related to cost and KYC (Know Your Client) that normally prevent a group from accessing formal financial services. In time, Milca’s group will decide whether they want to open an account at Barclays Bank (whose Banking on Change programme with CARE and Plan has helped to set up this VSLA) or with another bank. They already feel that the financial education they received from their trainer has prepared them to evaluate whether it is a good choice…

Do VSLAs work for poor women?

Milca makes 500 Kenyan shillings (ksh) a week and has quadrupled her initial investment in a matter of months. Today she has a business worth 4,000ksh. This is just the start and she wants to keep growing: “I want to increase into cosmetics, and beauty therapy to increase the profit,” she says. Milca is able to invest her profits back into the business because her husband’s income pays for her family. She’s also told us that since she joined the group, things have improved at home: “At the start I didn’t know how to speak to my husband, but since joining the group my confidence has increased. I want to be a change agent (inspiration) for other young women.”

The impact of VSLAs

More in this category: « Women’s rights are human rights: Views from CARE and partners Allies not leaders – How we work with men in support of gender equality »