Home // Development Blog // What next for Syria? How 15 years of experience with UNSCR 1325 could inform a different approach to the Syrian conflict

What next for Syria? How 15 years of experience with UNSCR 1325 could inform a different approach to the Syrian conflict 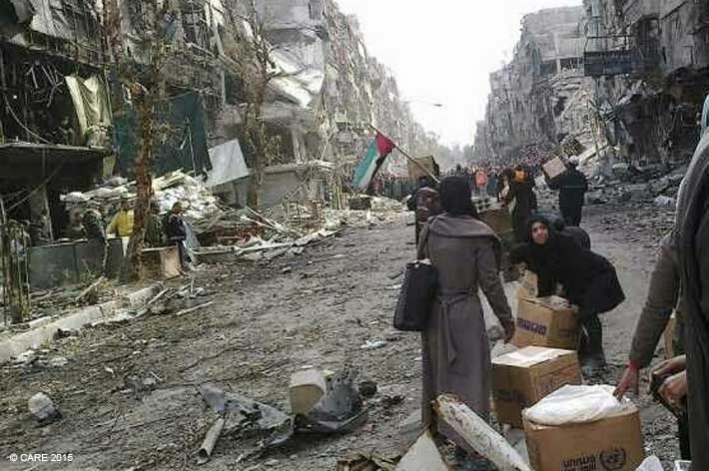 This year marks 15 years since world leaders passed UN Security Council Resolution 1325 on women, peace and security. On Tuesday 13 October, diplomats meet to review and chart ways forward on global efforts to protect and empower women in times of conflict. Given what we have learned from UNSCR 1325, what should we do differently from tomorrow on the Syrian conflict?

Syrian women have demonstrated an incredible level of courage and strength since 2011: participating in the early, peaceful civic activism; organising to support medical relief, food aid delivery, anti-polio campaigns and other humanitarian activities; and campaigning for a voice in peace-making. As diplomats meet to reflect on ways forward for women, peace and security, what should the international community do differently on the Syrian conflict to better empower, protect and assisting women and girls there?

Resolution 1325 calls for increased women’s participation in decision-making on peace and security. A recent survey of 40 peace processes shows that women’s ability to influence negotiations increased the chances of agreements being reached, was positively correlated with greater implementation and impacted positively on peace being sustained.

Given the context in Syria before and since the conflict broke out, Syrian civil society has faced numerous practical and political challenges in establishing their networks and influencing decision-making – both by power-holders on the ground and the international community. Unfortunately the latest news from preparations to revive the political process on the Syrian conflict, led by Staffan De Mistura, UN Special Envoy, is not encouraging.

Working-groups are in the process of being established on topics like protection and peace-making. While civil society was initially told they would be allocated seats within these, messages have become mixed of late. Syrian women activists have been encouraged to lobby the Syrian regime and opposition for seats within their delegations. This implies a worrying lack of either support for, or understanding of, the independent nature of civil society and the vital contributions that it could make.

How to change this? One option that CARE campaigns for is an Assistant Under Secretary General position to be created at UN Women to champion women’s participation in peace and security. While it’s not a panacea, women need allies in the UN system to push for their inclusion.

In addition, with the exception of Iraq, states affected by the Syrian conflict are yet to adopt National Action Plans (NAPs) on women, peace and security. While NAPs are not a ‘silver bullet’, they can provide a useful entry-point for dialogue between governments and women’s organisations. As governments neighbouring Syria talk to the UN and donors about the kinds of funding and technical support they need to host refugees and cope with the conflict’s impacts, integrating women, peace and security indicators into those efforts would help, and NAPs could facilitate this.

The WPS agenda also calls for gender to be factored into humanitarian aid, for example by integrating the views of women and girls into the design of refugee camps. One innovation that CARE has supported in Jordan is the piloting of new UN and NGO ‘gender equality measures’ to systematically monitor how we and other agencies factor gender into the refugee response there. It is early days, but the pilot is demonstrating promising results by encouraging each of the humanitarian sector working-groups – for example shelter, food, WASH and so on – to measure their efforts to support women’s participation.

Beyond this, Syrian activists highlight the importance of gender being integrated across how humanitarian agencies work, not just at the project level. Hivin Kako of Bihar Relief Organisation, shared the following: “While some donors have started to encourage aid agencies they fund to integrate a basic level of gender mainstreaming in projects, much more is needed to take gender seriously. We call on donors to encourage those Syrian NGOs working cross-border from Turkey and elsewhere to recruit and promote women into leadership positions, and work on their staff’s gender sensitivity. Without this, the needs and rights of women and girls won’t get the attention they deserve.”

Protection of women and girls from gender-based violence (GBV) is another objective in UNSCR 1325. The British Government, for example, has made Syria a priority in its ‘Preventing Sexual Violence Initiative.’ Syrian women’s rights activists have certainly called for crimes against women to be documented and prosecuted. However, concerns have also been raised about how international efforts on this front have been implemented.

Earlier this year, GBV survivors and women rights activists met with Zainab Bangura, the UN Special Representative on Sexual Violence in Conflict, to share stories and evidence of how both Syrian government and opposition forces were involved in sexual violence. Media coverage of this trip however referred only to acts perpetrated by Islamist opposition groups. While this emphasis may play well in Western capitals preoccupied with their national security agendas on countering violent extremism, such an imbalanced approach is deeply problematic for the survivors themselves and activists supporting them. In the words of one activist, “It is like we were not listened to at all. This undermines the trust of women in the affected communities and makes us look like we are serving an external political agenda. This does not help.”

Media and political focus on sexual violence inside Syria has led to increased donor funding for GBV programmes. While this is welcome, activists have flagged the importance of integrating GBV efforts into wider humanitarian action, rather than relying on stand-alone GBV projects.

Conflict prevention and violence reduction are also central to Resolution 1325. Consistent with the demands of wider Syrian civil society, Syrian women activists have decried the total failure by parties to the conflict, and the international community, to end the indiscriminate violence against civilians. For example, despite a UN Security Council resolution banning the use of barrel bombs, over 11,000 have been dropped since the resolution was passed in December 2014, an estimated 1,500 in August 2015 alone.

Syrian activists call for the implementation of a ‘No Fly Zone’ to prevent the bombardment of civilian areas, including schools and hospitals. Syrian women activists have also pointed to how the deployment of UN monitors on the ground in 2012 resulted in a reduction in the violence against civilians at that time.

If Syrian women activists were invited to join De Mistura’s working-group on Protection, these are likely to feature amongst their recommendations. Women activists are also making important contributions at the grassroots level to reducing the violence and addressing its consequences. In Lebanon, for example, Syrian women-led civil society groups like Women Now have supported Syrian refugee women, including some GBV survivors, to create safe spaces to meet, access assistance and to tackle the stigma surrounding violence against women in their families and communities. These projects are all small-scale and largely off the radar for most international donors, who – for administrative reasons – channel their funding to agencies working at larger-scale.

The 15th anniversary of UNSCR 1325 offers an important moment to ask ourselves: What should we do differently tomorrow on Syria?

Our recommendation to the UN, donors, regional powers and parties to the conflict is to factor the above ideas into their next steps. There is no quick or easy fix to this horrific war, but without women’s protection or participation, the hope of a better future for the country slips further away.

More in this category: « Why CARE and Accenture are creating a financial inclusion maturity model Day 1 of the World Humanitarian Summit: Marks for effort and achievement »