Home // Development Blog // When the soldiers come home: How to work with men and boys to stop the cycle of violence when war ends

When the soldiers come home: How to work with men and boys to stop the cycle of violence when war ends 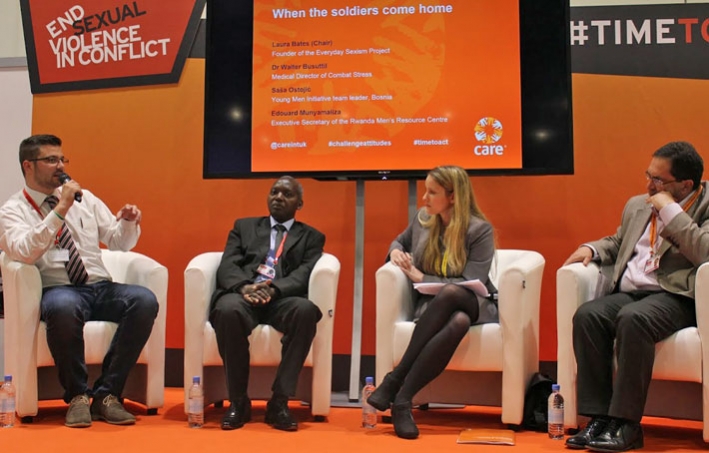 CARE’s discussion event at the Global Summit to End Sexual Violence in Conflict explored how the trauma of conflict permeates society long after conflict ends, made recommendations about the role of education in challenging attitudes and behaviours, and identified some of the challenges for scaling up this work to achieve long-term change.

The trauma of conflict – for combatants, families, children – permeates society long after conflict ends. This particularly applies to the experience of sexual violence in conflict – for perpetrators, victims and witnesses. Reliving trauma creates ongoing gender-based violence in society afterwards.

Dr Walter Busuttil, Medical Director of Combat Stress, said: “At Combat Stress we have 5,500 veterans... If we were to do a clinical audit of my patients, we would find that 35% of my veterans would admit to perpetrating a violent act at home. If you actually ask the partners or the wives, it probably doubles. So, war causes not only mental health problems in veterans and serving personnel, but also in their wives and families.”

Only when people feel safe can they begin to heal – both on a personal level, and for society in general. This takes time and an investment in mental health services and safe discussion spaces (created, for example, through peer-to-peer programmes).

“When you have societies that are healing post-conflict, you need to have systems in place that are supportive and that engage men and women,” said Walter Busuttil.

“It’s only when people feel safe that they can heal, speak openly, think on an emotional level. After wars people problem solve, build houses, build roads. They don’t think on an emotional level. But when things settle there is an increase in mental health problems. Soldiers take up to 14 years before they ask for help, so the system isn’t as helpful and supportive as it could be.”

He said there are lots of similarities with Rwanda and Bosnia – people heal slowly, and it’s a big job “because you have to change cultures as well, where men have a structure and women have a different structure”.

Edouard Munyamaliza, Executive Secretary of the Rwanda Men’s Resource Centre, said “challenging the norms that provide privileges to men is difficult” but is also “good news to many, because there are many who do violence unwillingly because of community and social pressures”. He said: “There are so many men who did not know that behaving in such a way was actually violating human rights, that it was something people can challenge without breaking the culture.”

He said these negative masculinities “hold men hostage” and that for many men, “showing them how they are also victims of the culture, how the culture is using them in a negative way, is a liberating message”.

Peer education is a crucial strategy for changing attitudes and behaviours – whether with rural communities or urban youth.

Saša Ostojić, team leader on the Young Men Initiative in Bosnia, said: “It was really hard to explain to people, even friends, parents, my aunt, my grandma, why am I in the ‘Be a Man’ club, why do I need that? My father asked, ‘What, you are not man enough? Why do you need that initiative?’

“A lot of masculinity is related to the soldiers and the tough guys. Our image is that we are aggressive and into alcohol abuse but we are now living in transition, trying to figure out how to come out of that and become ‘real men’.

“I became a peer educator and am trying to transfer that knowledge to other people – trying to make society and community better for us. I cannot imagine my life without this project because it helps me to figure out who am I and how to behave, how to respect women.”

Gender equality and non-violence should be included on school curricula so that attitudes can be influenced at an early age.

Saša Ostojić pointed out that masculinity has been forming for hundreds of years, so changing masculinities will be a process taking years – so “the best way is to start now and to do it constantly”. The Young Men Initiative is already working in six high schools in Bosnia, and the programme is now on the school curriculum.

Laura Bates from the Everyday Sexism Project, who chaired the event, said she had recently visited Kosovo and was “incredibly impressed and inspired to see the work in the Balkans to tackle societal attitudes and norms that had gone unchallenged, and to see men as champions of change and part of the solution.” She said: “I would implore UK ministers to get this on our curriculum because it beggars belief that our young men in the UK are not being taught about these crucial issues of respect in relationships.”

Responses to sexual violence must be holistic – they must address the needs of women and girls while also involving men and boys.

Edouard Munyamaliza explained how RWAMREC in Rwanda uses village savings and loans schemes can be used as an entry point to engage with men, making them supporters rather than opponents of women’s economic empowerment, and changing both men’s and women’s attitudes to gender equality.

Trauma affects all levels of society after conflict so services need to include psycho-social components with sufficient time and safe spaces for healing to take place.

Ingrained social norms and roles mean women as well as men can oppose changes to the norms and behaviours that drive and underpin sexual violence and gender inequality – how do we engage both men and women gatekeepers to transform masculinities?

In Rwanda, said Edouard Munyamaliza, “There are women who accept and support men being positive and not behaving violently, but there are also others who believe that men should not behave like women.

“That’s not the message we are giving out but when you say why can’t you do something for your wife and help with childcare, some women will say ‘that’s my role’. For their part men can think they are being instrumentalised and so they resist that.”

How can we apply the lessons from two decades of research into psycho-social responses to PTSD for combat veterans to the issue of trauma arising from sexual violence experienced by women, men, children and communities?

Walter Busuttil said: “My advice to ministers is to have a policy relating to the psychological trauma of war because it permeates down not just from soldiers but to families and children. Governments have to stand up for the weakest and need policies to look at rehabilitation as soon as practicable post-conflict.”

How can we scale up ‘bystander’ interventions which offer a key way to tackle gender-based violence and violent behaviour?

Saša Ostojić explained how in Bosnia the 25th of every month is an ‘orange day’ of preventing violence against women, using social networks and activities in schools to make the campaign interesting and get people to sign the declaration of zero tolerance to violence. “Peer pressure is a big problem,” he said. “When I was in high school I was teased for playing volleyball because it was seen as a game for girls not boys, but you need to make a stand and have safe surroundings with your friends and people who understand what you are trying to do.”

How do we ensure faith-based leaders or other groups which are hesitant to transform gender norms are engaged to become allies for change?

In Rwanda, said Edouard Munyamaliza, “faith-based organisations were saying that we were trying to feminise men. They believe that a man should not do women’s work.”

Political support for engaging men and boys is required, including leadership and funding – how do we make this a non-partisan issue?

Saša Ostojić summed up: “We must include every single man, whether president of the state or just a regular guy, to face these issues. We [men] are producing the issues so we must be the ones who are fixing them.”

More in this category: « Why mix with the Davos fat cats when you fight for the poorest? Global Goals, What next? Panel discussion »