Who are ‘the people’? – Making citizen participation models work for poor and marginalised groups 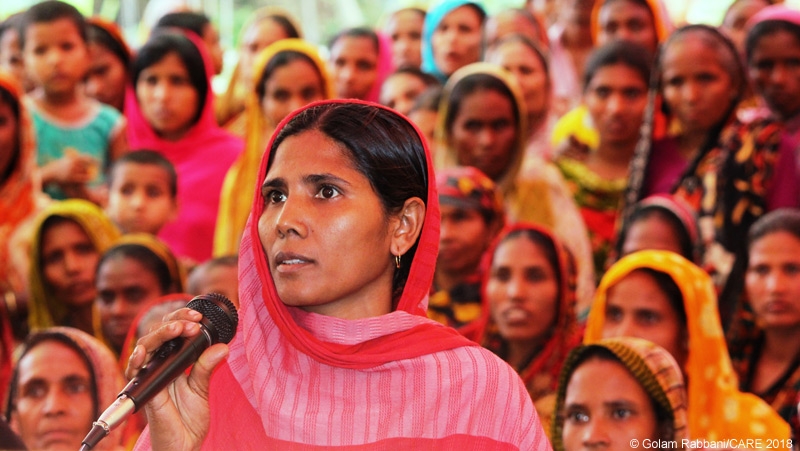 In the first blog in this series, we showed how participatory power analysis, by identifying the marginalisation of specific groups, can help ensure that participatory local governance does not simply enable those who already have privilege and access to gain greater influence. But what happens after marginalised groups and the reasons for their exclusion are identified? How do we build concrete strategies to include the voices of poor communities and excluded women? In this second blog in the series, we look at citizen forums as a strategy for wider participation.

Many countries are now embracing participatory local governance models – various forms of state decision-making processes that mandate local representatives to include and consult with citizens. These provisions are increasingly enshrined in policy and law, as many countries pursue ambitious decentralisation agendas. They can take a wide variety of forms, such as:

This trend shows enormous promise, and is a celebrated success of proponents of inclusive governance practices. However, most of these citizen participation opportunities involve at least some notable barriers to entry. Participating effectively in these spaces may require:

These factors make it more likely that citizens with greater resources, privilege, and social status are more likely to dominate these spaces.

The will of the people?

The views and priorities articulated in citizen participation spaces are often interpreted as the voice of ‘the people’ and this is a problem. Development priorities requested by citizens become ‘people’s plans’, and financial allocations advocated by citizen groups become ‘people’s budgets’. But in many cases, these might be better labelled ‘the plans of dominant class people’ or ‘men’s budgets’.

The questions we must address are: who is speaking for ‘the people’ in participatory governance models, and whose views are standing in for the views of ‘the public’?

These questions were central to the study tour CARE Bangladesh hosted in July, on the JATRA project funded by the World Bank’s Global Partnership for Social Accountability (GPSA), for 25 participants from 12 countries in the Local Governance Initiative and Network (LOGIN).

The analysis and mapping process, described in the first blog in this series, is used to categorise hamlets and neighbourhoods into three categories: primary elites, secondary elites, and excluded or marginalised areas. CARE facilitates the creation of a citizen forum in each union, made up of representatives of poor households and vulnerable groups, half of whom are women.

Citizen forum members are nominated from each of the areas identified in the third category of communities – those who are not from primary or secondary elite areas. These communities are most often landless and dependent on large land-holders for temporary labour opportunities. They are often characterised by being in more remote locations, having fewer and worse roads, longer distances to travel to schools and health facilities, and poorer sanitation.

Representatives from these areas rarely run for office or win elections, resulting in their under-representation in decision-making spaces. However, CARE has worked in many of these areas progressively for more than 10 years, especially investing in ‘natural leaders’ from among poor households and women’s solidarity groups, building up a cadre of socially-aware and publicly active citizens prepared to take on roles in the citizen forums. In this sense, JATRA’s citizen forums benefit from long-term investment in social capital among marginalised groups.

The citizen forums are then supported by CARE to play a critical role in preparing poor and marginalised communities to claim their rights and maximise the participation spaces available to them. Many of these opportunities were established by the country’s 2009 Local Government Act, which decentralised more planning and decision-making to the lowest level of elected government and created a legal framework for citizen voice and public transparency.

Among other provisions, the Local Government Act 2009 mandates local councils to hold two rounds of public planning and budgeting meetings in each fiscal year (in each ward): the first to consult community members on local priorities, and the second later in the year to share a progress update on implementation and expenditure. The act also requires local councils to include members of the public in each of their mandated sectoral standing committees, with quotas for women, which have a role in planning and overseeing key local services.

Since the enactment of the law, CARE Bangladesh has focused on helping poor and marginalised citizens to make the most of the provisions of the law. Throughout the programme cycle, the citizen forum became a central vehicle for this.

CARE trained citizen forum members on the act, its provisions, and the various ways local governments are required to consult with, include, and respond to citizens.

We also trained citizen forums on the process for Bangladesh’s annual planning and budgeting cycle: how much money local governments receive for which purposes and how to analyse the best opportunities for influence.

Citizen forum members then work with their home communities to prepare for public budget meetings, to foster interest, to build confidence by explaining government processes, and to help communities plan their shared priorities and select their spokespersons.

In the JATRA project, CARE then supported citizen forum members to prepare for and take up seats reserved for the public on prominent local government committees. This means they have a say in strategy-making and problem-solving on issues related to health, education, local sanitation, nutrition, women’s rights, disaster risk reduction, and more.

These social audits have resulted in greater accountability measures for contractors, the commitment of additional funds to upgrade facilities, and creative solutions for persistent problems like annual flooding in important public places.

Community score cards are used by citizen forums to assess the effective allocation and use of annual local council budgets, grading the use of the budget against the plan and against the Union’s sectoral priorities. After consulting with their home communities, citizen forum members participate in the Union Parishad annual evaluation and give a red, yellow, or green rating for each councillor on their performance against a set of key indicators. Councillors strive to improve their ratings, and can be seen deliberately taking actions to improve year on year.

The work of the citizen forums has stimulated broad participation from people from poor households and from women in annual planning and budgeting meetings.

Prior to the project these meetings were either not happening at all or achieving close to the legal minimum of 5% of citizens attending. By the end of the project more than 12% of the total voting population of each area were attending these public meetings, with the increase being driven by greater interest from marginalised communities and poor women. Although many women in rural Bangladesh claimed that attending meetings related to the local government’s budget is a man’s responsibility, by the end of the project nearly half (49.6%) of the attendees of open budget meetings in the project area were women.

Since the projects began, representatives of poor households and neighbourhoods have put forward a significant number of well-developed and well-evidenced proposals to local government, many of which have been funded and implemented.

By 2017, 56% of the demands or issues raised at public budgeting meetings in the project area came from people from poor and excluded communities, 20% of which were placed by poor and marginalised women.

Through their work, citizen forum members develop regular face-to-face relationships with elected representatives and local elites, a rarity for anyone from their communities. During the study tour, one long-serving Union Parishad chairman directly credited his local citizen forum for upending the class-based social norms that were preventing people from their communities from approaching and making demands of their local governments.

Community members from poor areas now feel they have allies with access to government and are more willing to approach their Union Parishad members directly or with the support of their citizen forum. Local leaders are increasingly receiving feedback from typically-overlooked constituents and have begun to recognise this group as an organised political force that they must be accountable to.

The new visibility and consolidated voice of the poor is shifting Bangladesh’s elite-driven politics and centring the voices and priorities of previously-excluded people. CARE has found that citizen forums are an effective vehicle for pro-poor and gender equitable participatory local governance when they are:

The voice of ‘the people’ is then amplified from those at the margins.

This blog is the second in a two-part series reflecting on key themes from the recent LOGIN study tour hosted by CARE Bangladesh. Read the first blog, focused on CARE Bangladesh’s unique approach to participatory power analysis which informs their programming on local governance:

Beyond the tools: Participatory power analysis as the missing ingredient in local governance programming

More in this category: « Climate change resilience: adapting farming practices and enhancing food security in Mozambique 5 Minute Inspiration: How do ID cards help women in Nepal out of poverty? »