Home // Development Blog // Why bother? The case for building alliances with Social Movements

Why bother? The case for building alliances with Social Movements 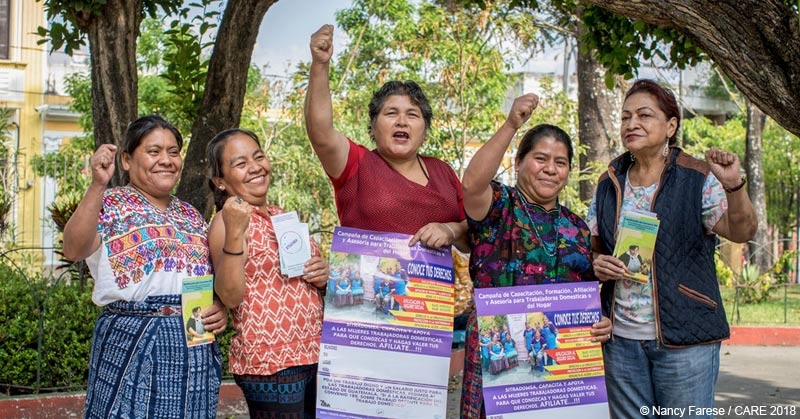 CARE seeks to tackle the underlying causes of poverty and social injustice to bring lasting change to the lives of poor and vulnerable people (CARE 2020 Program Strategy). But how many of us can say that tackling these underlying causes is what we focus on every day?

“I am not free while any woman is unfree, even when her shackles are very different from my own.” – Audre Lorde

Are we sure that the programs we work on tackle the root causes and fundamentally challenge the unequal power relations that perpetuate social injustice and poverty?

Do we challenge the world’s insatiable desire for economic growth?

Do we challenge the international financial system, founded upon the pillage of entire continents, with the proven ability to undermine the economic gains of millions of Village Savings and Loan Association (VSLA) members in the blink of an eye?

Are we able to stand resolutely with the young people who confront power with the fact that the climate crisis risks undoing 75 years of development work and is an existential threat to our planet?

Are we bold enough to point to the fact that our programs have been primarily funded by the same countries that have contributed most to the catastrophe?

When do we look at our Gender Equality Framework and remember that the “structure” dimension is about addressing what lies deep and often hidden in human societies: social norms?

Just being able to ask these questions shows progress perhaps, but we should also reflect on whether a global International Non-Governmental Organisation (INGO) is best placed to tackle these underlying causes; whether we are able to transform social norms, structural injustices and power inequities at a global level.

Do we know how a change of that magnitude happens?

Research shows that major social change only occurs when those who have been excluded from power organise collectively in the form of social movements and challenge existing systems.

CARE understands a movement as “an organized set of people vested in making a change in their situation by pursuing a common political agenda through collective action”, as defined by the women’s rights advocate and academic, Srilatha Batliwala

In addition, there is growing evidence globally that feminist social movements are driving gender justice, not INGOs.

But is it realistic to think INGOs could work with social movements?

The good news is that CARE’s research shows we have more in common with social movements than we think:

The less good news is that space for civil society is shrinking. Only 3% of the world’s population lives in an enabling civic space, meaning (according to a report from the CIVICUS Monitor) that 97% face “serious threats when organising, speaking out or taking peaceful action to improve their society”.

INGOs try to accommodate this by making themselves indispensable, which, in many cases, means playing by increasingly oppressive rules and running after the latest trends. But the same steamroller which is crushing large parts of civil society has no reason not to turn against INGOs. Should we not, therefore, stand in solidarity with social movements and activists to ensure that our common civic space is protected?

But who are these actors and how can we work with them?

CARE is already engaging with social movements and we can learn from this. For example, in Latin America and the Caribbean and in West Africa, CARE has brought movements together for learning and connecting them to decision-makers, acting as a convener.

In these two regions, CARE has been a long term ally with the Domestic Workers Movement and with the Mata Masu Dubara (MMD) movement, aligning our agendas with them and being a critical friend.

The commitment of one donor for 25 years has also enabled us to be a resource partner for MMD, but other funding models such as the Embark initiative are also emerging as possible models for flexible and long term funding.

In addition, we have used the multiple connections across the CARE confederation to amplify the voices of social movements, most recently during the global mobilisation and campaign towards the ILO Convention 190 on ending violence and harassment in the world of work.

Large INGOs like CARE must recognise the power we hold and engage carefully and intentionally to ensure we do not disrupt or disempower activists. This means:

Visit our Supporting social movements page (in the Insights In Practice section) for additional tools and resources.

Do you feel like joining the movement? Contact us through This email address is being protected from spambots. You need JavaScript enabled to view it. or join our ‘Engaging with social movements and women collective actions’ group on Workplace.

More in this category: « How to double your impact through advocacy and influencing Improving identification of sexual harassment in factories: How CARE and Better Factories Cambodia worked in partnership »