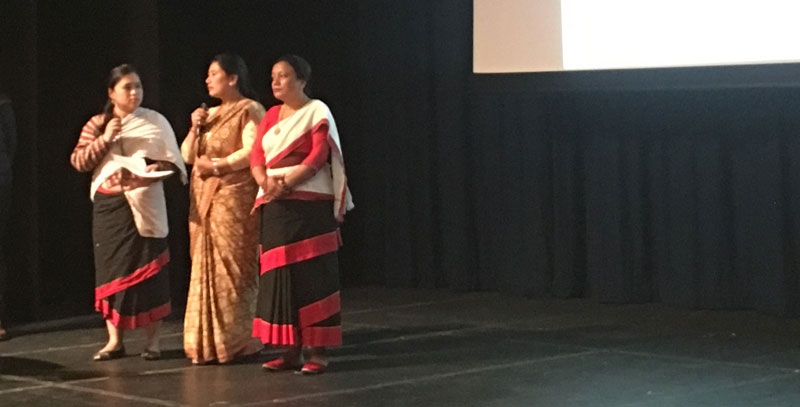 As a researcher, I see that humanitarian practitioners listen to and involve local women and women’s groups when delivering programmes on the ground – or at least, if they don’t, they know that they should. But if we are really serious about localisation and gender equality, we also need to invite women from the countries where we deliver programmes to come to our learning and practice workshops back in our home countries.

That’s not just what I think – that’s what women from disaster-affected communities think, too. I recently invited three women, who I met while doing research in Nepal, to come to the UK to participate in academic conferences and technical workshops. One of them, Silu Shrestha, told me:

“Participating in discussions at Bath University made us feel like we were contributing to change. There were rooms full of people who were experts in their fields, yet they were interested in what ordinary women from Nepal had to say. This was a humbling experience.

“I believe that hearing community people and disaster-affected people is necessary to make changes in the way humanitarian responses and post-disaster interventions are done. I hope all the efforts to bring the voices of these women to a platform like this conference will help make positive changes in the way humanitarian responses are done in future.”

The effects of the 2015 earthquakes in Nepal were devastating. There were over 8,790 casualties, 22,300 injuries and approximately 500,000 houses were destroyed (Government of Nepal, 2015, Post Disaster Needs Assessment Executive Summary). As in other disasters, affected women and men took the initiative and were the first to respond. Their actions often went beyond supporting their immediate households and families. The Government of Nepal declared an emergency and requested international support.

In 2018, I spent three months collecting data in a peri-urban ward of the Kathmandu Valley carrying out doctoral research on how women in vulnerable situations interact with shelter self-recovery initiatives. I met groups of women who had supported their communities in the early stages of relief and were trying to extend this support into the longer-term reconstruction stages.

One of these groups was a Women’s Cooperative and Savings Group with longstanding links to local NGO Lumanti and to the wider Asian Coalition of Housing Rights (ACHR) network. The other was a Single Women’s group set up locally but associated with local NGO Women for Human Rights. The majority of women in vulnerable situations that I interviewed for my research mentioned they belonged to and had received support in the early stages from a local group.

As I interviewed the leaders of these groups as Key Informants for my research, I felt the extent and relevance of their work should be shared beyond my research study.

In May 2019 we invited two of these women to the UK for a week. Binita Shrestha worked with the Women’s Cooperative and Savings Group and Shanti Maharjan was the founder and leader of the Single Women Group. Silu, who worked as my research associate, also came to support with translation and interpretation. They came to participate in an academic workshop at University College London (UCL), and in the Technical Workshop and UK Shelter Forum 24 (UKSF) at Bath University (with funding from the Urban Sustainability and Resilience Centre [USAR] at UCL and CARE International UK).

This is what Binita said:

“In the context of Nepal, for women it is a great opportunity to be invited to conferences and forums because socially, women are still behind here.

“These are the platforms where women can show their capacity and share their experiences.

“They can learn so many things which they could implement in their nation. These forums strengthen their knowledge and will-power to do something.

“In my case, [on my visit to the UK] I got the opportunity to share my ideas in world-reputed colleges, which has motivated me to know that I can do a lot for my nation and in the field of women’s welfare. I was given a chance to speak about activities we have done in Nepal.

“I learnt so many things there which will be lifetime beneficial for me – things which I will try to implement here in Nepal. It has encouraged me to do more in future.

“The benefit we got from our visit to the UK is infinite, which cannot be described in words.”

The past decades have seen a shift from a rational, scientific model of knowledge production to one that also values local indigenous knowledge. Yet the dichotomy between western and local knowledge is now in question, as ultimately all forms of knowledge can be seen as local and specific to their context (see Agrawal, A., 1995, Dismantling the divide between indigenous and scientific knowledge. Development and change 26, 413-439). What makes one knowledge “truer” than another is the dominance of one social group over the other. The group with more power can push for their knowledge to be the one that can provide legitimate answers.

Today, we believe in knowledge that is multiple, democratising and co-produced. In this time of localisation, participation has to go beyond the implementation of humanitarian shelter projects. The sector recognises the need for women and other vulnerable affected groups to participate in government and policy-making in their countries. However, we also have to include them in our workshops, forums and conversations. We need to include their voices and experiences.

Opening up spaces for co-production of knowledge

Beyond the valuable information shared, both events were successful in opening up a new place of intervention to Shanti, Binita and Silu. They interacted with us as peers, creating a space for co-production of knowledge. They were and are, after all, as active as other humanitarian actors, directly involved in the reconstruction of their communities.

Practitioners, academics and students at the events responded positively to the women’s presence and interventions and thanked us for organising the visit. We remembered the importance of working with, not just for, disaster-affected women, men, girls and boys. We saw that distance, difference, culture and language are not barriers to sharing. We learnt that the effort and cost of organising their visit was small in comparison to the benefits of having them here.

For their part, Binita, Shanti and Silu said they were grateful to be invited and listened to. They said they now understood the international humanitarian system better. And they said that through their visit to the UK there will also be learning for them that they will take back and share with their communities and co-workers. As Shanti summed it up:

“It was a once in a lifetime experience for me. Being a single woman from a conventional society that treated widowed women as a burden I never imagined that I would get such a platform that valued my opinions.

“Not many people in my society and community show concern for single women. I was fighting my own fight to get rights for single women of my community. So being heard in UK was both an emotional and proud moment for me. It was not just me but even the women from my single women’s group told me that they felt heard.

Lucila Carbonell has been working with the humanitarian shelter team at CARE since September 2015 as part of her UCL-based Doctorate in Engineering. She has recently been working on a summary of the "Gender and Shelter Guidelines" and on the "Minimum commitments for shelter interventions" as they relate to gender and diversity.

Lucila’s research focuses on post-disaster recovery and gender in the urban context. The objective is to understand and further develop the concept of Shelter ‘Self-Recovery’ after disaster by learning from the experiences of women in vulnerable situations who were affected by the April 2015 earthquakes in Nepal.

More in this category: « What’s the most effective way to promote change for women working in garment factories? How Rwanda reduced violence against women by half »