Will the UN Refugee and Migrant Summits make things better for refugee women and girls? 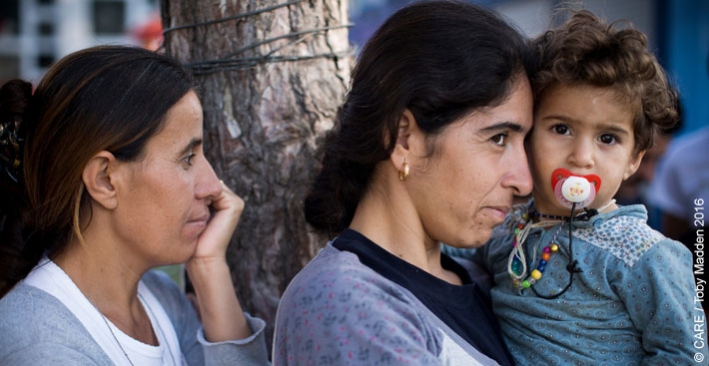 Over 40 grassroots women-led civil society organisations, human rights and humanitarian agencies have today launched a new Joint Statement on Women and Girls outlining 10 recommendations for next week’s global refugee and migrant Summits – and beyond. So what do we know about the likely Summit outcomes from a gender perspective?

For the UN Summit for Refugees and Migrants on the 19th, a draft Declaration can be found online. It includes some important references to protecting and empowering women, but as is the way with such documents, none of them are very specific. The text refers to “combatting sexual and gender-based violence” and “gender equality and the empowerment of all women and girls” and “access to sexual and reproductive health-care services”. But whether any governments will come to the Summit with more specific plans to action any of these commitments, or not, remains unclear.

Will they protect women refugees from exploitation?

Recent assessments across Jordan, Lebanon, Greece and the Balkans point to how reception facilities and refugee camps continue to fail in providing even the basics in terms of protecting women and girls from violence and exploitation. For example, the Observer newspaper ran a story revealing reports from Sofitex camp in Greece of criminal gangs allegedly infiltrating the camp, sexually abusing children and forcing them into sex-work and trafficking.

It is a scandal that in the world’s wealthiest continent, Europe, governments have failed to prevent this kind of exploitation. We need donor governments funding the crisis response in Greece and elsewhere to make preventing gender-based violence a consistent priority in what they fund. Both governments and aid agencies should be monitored for how they do, or do not, address this and held accountable.

Will they enable women refugees to participate in decision-making?

Likewise, it’s great that the draft Declaration acknowledges that refugees, and specifically refugee women, should contribute to decision-making on the crisis response. After all, these decisions will impact on their lives and hopes to find asylum, integrate in a new society or return when the conditions permit to their country of origin.

But for this to happen, we need governments to enable them to participate. For example, in many countries, governments have imposed complicated bureaucratic obstacles on refugee women legally registering civil society organisations. This obstructs them from accessing funding or participating in a more structured way in decision-making.

Will they do more to reunite families?

Ironically, other aspects of the Declaration could potentially put refugee and migrant women and girls at greater risk of violence, and less able to live in dignity. For example, statements like “states are entitled to take measures to prevent irregular border crossings” arguably contribute to a wider criminalisation of people crossing borders in search of safety.

This could be seen as part of a wider shift by wealthy governments to build legal and physical walls forcing women fleeing crises to undertake irregular journeys, and put their lives in the hands of people smugglers.

One option would be for wealthy governments to expand the scope for refugee family reunion, which would be especially important for women and children, as men often seek refuge abroad first. The Declaration offers nothing specific on this beyond stating: “We will consider developing…”

Will they end the detention of refugees?

Detention is another concern. The text refers to detention for asylum-seekers as a “last resort” for children and that it should be limited “for the shortest possible amount of time”. Yet legal experts highlight that detention is already defined as a child rights violation.

Detention is never appropriate for children, pregnant women, survivors of sexual and gender-based violence, or other vulnerable individuals.

And concepts of ‘last resort’ and ‘shortest possible time’ have also proved elastic. In Greece, many children are presently detained, on grounds of ‘last resort’, long  beyond the stated national policy of 25 days maximum.

Will they take shared responsibility for hosting refugees?

The implications of the Leaders’ Summit on Refugees convened by President Obama on 20th September also remain to be seen. President Obama has said he wants the Summit to deliver new commitments from governments to share the responsibility for hosting refugees.

If this happens, it would be really important for women and girls displaced by crisis.

Right now, inside Syria, over 75,000 internally displaced people – including many women and girls – are trapped in the desert at the Syria/Jordan border and unable to flee across the border because the government of Jordan will not let any more refugees in. While a security incident in June was one cause of this, the King of Jordan himself has also said: “If you want to take the moral high ground on this issue, we'll get them all to an airbase and we're more than happy to relocate them to your country.”

So both Summits need to secure new resettlement commitments. The urgency of this cannot be over-stated.

Will they honour their funding pledges?

Along with the push for pledges to resettle refugees, the Obama Summit aims to raise funding for the refugee crisis response, which is great. (Although, if the Summit pretends that funding to Jordan, Lebanon and Turkey can substitute for steps to share the responsibility for hosting refugees, then it’s arguably part of the problem, not the solution...) But governments have a poor track-record of translating funding pledges at Summits into actual money for aid and protection efforts on the ground.

As ever, these failures to deliver on promises are particularly felt by refugee women and girls. For example, of the 200,000 new work permits promised for refugees by the Jordan Government at the London Conference on Syria in February 2016, only 20,000 have been issued so far – and only 2% of them have been accessed by women, according to the International Labour Organisation (in an ILO presentation to a Syria crisis livelihoods working group in June 2016 based on Ministry of Labour data). And while donor and government commitments to get refugee children into school are important, experience in Lebanon suggests that girls face specific challenges (eg safety concerns about them travelling to educational facilities when classes are in late afternoon/evening shift).

And protection-related projects – especially gender-based violence – remain consistently underfunded. So without deliberate steps to ensure funding results in tangible improvements for displaced women and girls, these may not happen.

Will the Summits galvanise action, or not?

Earlier this week, we partnered with Women For Refugee Women on an event in London featuring refugee activists reading testimonials and debating the issues with UK members of parliament Yvette Cooper and Heidi Allen. One of the stories came from a Yazidi woman, Nadia, who had fled atrocities in Iraq and Syria and walked by foot through mountains in her effort to reach a place of safety.

One line stuck in my head. She told us that she’d survived scrambling through forests by drinking rainwater from the leaves. That this is happening at the borders of the wealthiest continent in the world, Europe, is shocking.

So as we read through the Summit Declaration and assess the speeches and commitments made by heads of state like Theresa May, Angela Merkel and Barack Obama on the day, we must keep women like Nadia in mind. Will the Summits next week galvanise action to better protect and empower women like Nadia or not?

CARE at the Summits

CARE has worked to bring the perspectives of refugee and migrant women, as well as our own specialists on gender in humanitarian action, into the Summit process. We have collaborated with over 40 different local women’s organisations from communities affected by displacement to launch a Joint Statement on Women and Girls. And during the Summits, we will co-host an event with the Canadian Government, Women’s Refugee Commission and Women’s International League for Peace and Freedom at which activists from Bosnia, Iraq and Syria – Zrinka Bralo, Mina Jaf and Sabah Al-Hallak – will share their insights with ministers.

More in this category: « It’s aid, but not as you know it: The changing rules of what counts as aid money Three ways to make involuntary resettlement for extractive industry development a dialogue and not a confrontation »