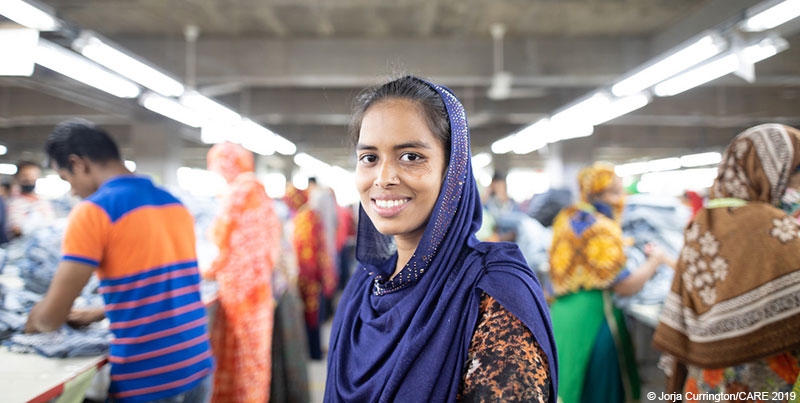 Rima is a Quality Inspector at a garment factory in Gazipur, Bangladesh

By Huong Hoang and Céline Mias

The global fashion industry is one of the most female-dominated industries in the world. It is a goliath of an industry which includes the textile, clothing, and footwear sectors, which is estimated to employ about 60 million to 75 million people, 80% of which are women. Although countless women are behind this US$2.4 trillion industry which, if it were a country, would be the world’s seventh-largest economy, women workers are disproportionately represented. They are, in fact, found heavily concentrated in the most vulnerable and marginalized positions in the industry where they work for poverty wages and under harsh conditions. These women workers often face gender discrimination, exploitation and suffer from the impact of violence and harassment not just in the workplace but in their homes and on their way to and from work.

What can and should we do?

CARE International has joined over 65 civil society organizations in promoting the Civil Society European Shadow Strategy for Sustainable Textiles, Garments, Leather and Footwear. This proposal and strategy calls the EU to promote and support the development of a Textiles, Garments, Leather and Footwear industry that respects human rights, creates decent jobs and follows social and environmental standards throughout its value chain in the EU and beyond. It is in this context, that CARE International wishes to highlight the critical dimension of gender inequality and discrimination in the industry and call on the EU to ensure that a gender-transformative approach is firmly integrated into every facet of its future strategy.

Many of the women who make up the heart and soul of the garment industry live in poverty. They survive on shockingly low wages and making significantly less than their male counterparts.

On average, garment workers only receive 1-3% of the final retail price of clothing. This means that if a T-shirt costs US$11, roughly only 33 cents will find its way to workers. In Vietnam, the fourth largest garment exporting country in the world after China, India and Bangladesh, Oxfam reported that women workers who produce shoes and clothes for global fashion brands earn just US$1(€0.8) per hour. This places them in a constant cycle of poverty as they struggle to feed their families and provide a proper education for their children. Profits are placed above livelihoods and the needs of the workers ignored. Recently in Bangladesh a new minimum wage was set for garment workers at 8,000 taka (US$94/€81) per month an amount which, according to Clean Clothes Campaign, was markedly lower than what is needed to cover a worker’s basic needs.

Under tough working conditions and low wages, women workers often face poverty-related, gender-specific consequences and multiple burdens of work. The burden of domestic work, child care and the challenges arising from income poverty mean that women workers are oftentimes trapped in a cycle of inequality.

Women workers are under threat of violence and harassment

Violence and sexual harassment are one of the most insidious threats to women workers in the garment industry. They take many forms, from outright sexual violence and harassment to physical abuse, inappropriate touching, and verbal abuse. CARE’s research has found that nearly 1 in 3 women garment factory workers in Cambodia reported experiencing sexually harassing behaviors in the workplace, with recent on-the-ground reports from CARE projects in Southeast Asia suggesting this figure may be as high as 1 in 2. Another study conducted in Bangladesh by ActionAid discovered that 80% of garment workers have experienced or witnessed sexual violence and harassment at work.

Issues linked to gender-based harassment and violence are often silenced by giant global value chains and intensified by gender power imbalances between a mostly female workforce and predominantly male management structures. This problem remains largely hidden, rarely emerging in ethical audit reports and often overlooked on the list of concerns of brands and employers. As well as the harm that it causes to workers, sexual harassment has significant economic costs for companies. Research by CARE found that sexual harassment in the garment industry alone results in millions of dollars of lost productivity every year through absenteeism, increased staff turnover, litigation/compensation, as well as damage to enterprise reputation, image and competitiveness.

Women workers’ voices are not heard

Women making clothes and shoes for global fashion brands are invisible in the industry. Denied or disenfranchised from meaningfully participating, they may not have access to spaces to advocate for their rights and needs at work. CARE’s research in the garment sector shows that in some sourcing countries men are three times more likely than women to be supervisors. In Bangladesh, only 3.1% of women workers are members of a trade union and the vast majority of senior leaders are men. The unequal distribution of power and agency remain at the heart of the injustices women workers experience. Labour rights violations experienced by women are frequently ignored or downplayed, and women workers may not always feel safe speaking up or taking action against gender discrimination, even to worker representatives.

Women workers are most vulnerable to the crisis

With shutdowns, closures, and factories coming to a standstill, the COVID-19 pandemic has exposed the fragility of the garment industry, its abuse and exploitation of workers, and the imbalances that are inherent to its business model. Though not a new situation, the pandemic merely highlighted the harsh realities of a broken industry where workers carrying the majority of business risk and suffer for it once profits are hit.

Brands and retailers have quickly moved to cancel or postpone production orders, refusing in many cases to pay for clothing their supplier factories have already produced. As result, thousands of factories in many sourcing countries have completely or partially shut down which has led to hundreds of thousands of factory workers across the world – mostly women – being suspended or laid off and facing no income to support themselves and their families. Most of these already struggling, underpaid women have few savings to fall back on, have little or no access to social protection, and face a dearth of alternative opportunities for income generation. Alongside loss of income, female workers are facing COVID-19 health risks, food insecurity, increased risk of gender-based violence, an increased burden of unpaid care work and barriers to practicing their sexual and reproductive health rights.

Change is possible but it requires political will from all actors. The European Union (EU), along with governments from both sourcing countries and other global north countries, brands, retailers, suppliers and other stakeholders, must take significant steps to ensure clothes are produced in an ethical way, where women workers are paid a living wage, work in decent and safe conditions, are free from violence and harassment and are able to collectively voice their rights free from reprisals.

Through its upcoming EU Strategy for Textiles, the EU can play a vital role in this effort. Using legislative and non-legislative tools, the EU can encourage businesses to reimagine their business model to tackle unfair trading practices and ensure dignified work for workers throughout the supply chain—including the vast numbers of vulnerable women workers. A more resilient and just garment industry requires risk to be shared more equitably throughout the supply chain, rather than being passed down to the workers who can least bear it and who suffer the most when crises hit. Fair purchasing practices, stronger and more equitable business relationships between buyers and suppliers, social dialogue throughout the supply chain and universal social protection are all essential elements to building back better from the crisis.

The EU can encourage that brands publicly acknowledge the low wages women workers are facing and commit to respecting their rights to a living wage and work towards the implementation of living wages in their supply chain. The EU can also support efforts to ensure that brands consult with unions and worker’s representatives to ensure that workers are able to have a representative say in their working conditions in all factories and are a meaningful part of all negotiations related to their wages, benefits and working conditions.

The EU can additionally support efforts to prevent gender-based violence in the sector by encouraging EU Member States and governments in sourcing countries to work on speedy ratification and national resourcing and implementation of ILO Convention 190 on Ending Violence and Sexual Harassment in the World of Work.

Respect for human rights and gender equality, with a focus on gender transformation in the industry, must be part of any future EU Strategy for Textiles. Such an approach is not only required, it is also firmly entrenched in EU policies and values. Gender equality is a core value, right and principle in the EU Treaties, and the new EU Gender Equality Strategy adopted in March 2020 commits to “systematically including a gender perspective in all stages of policy design in all EU policy areas, internal and external”. Moreover, the new Gender Action Plan for external action (GAP III) to be published shortly, is also expected further to highlight the need for EU gender transformative action in all areas, including through support to programmes promoting women’s voice and economic justice, and through policy coherence for sustainable development in relevant policy areas such as trade. CARE International believes the EU thus has a moral, ethical, and political imperative to support efforts to create a more gender just global textile industry.

I provide advocacy expertise for CARE Dignified Work in Asia. I joined CARE in 2019 where I have contributed to the re-design process of the Made by Women Strategy ensuring women in the garment industry have access to decent jobs, are free from violence and harassment in the workplace and can give voice to their rights at work. I also support country offices with development and implementation of advocacy strategy and plans, advocacy trainings, knowledge management and linking national advocacy initiatives with CARE regional and global efforts.

I have more than 15 years of experience leading NGO policy research, advocacy and public campaigning in Asia to tackle inequality and human rights issues, poverty, gender and environmental challenges. I am a Vietnamese national and hold a MSC degree in International Development and Environment from the University of East Anglia, UK.

More in this category: « Women can’t shout loud enough… and other myths around female leadership CARE’s new guidance for Impact at Scale »