Women’s empowerment in the hospitality and tourism sector 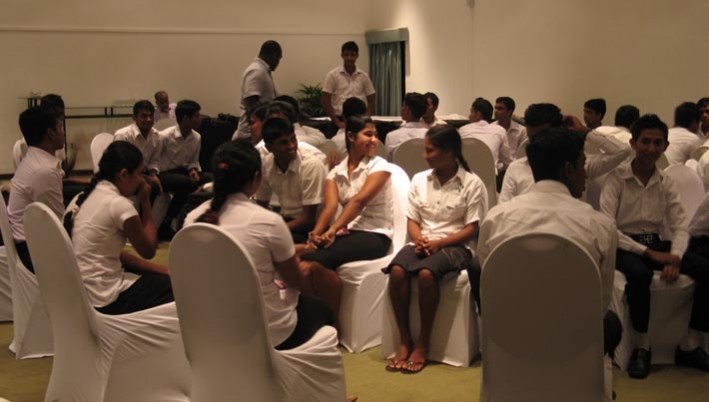 Participants in the life skills training provided by CARE and Diageo

Post-war Sri Lanka (since 2009) has much to offer tourists, and the country is relying on the hospitality and tourism sector to drive up economic gains and create a positive ripple effect on related social factors – such as meeting the employment needs of several million young Sri Lankans on the look-out to secure a job. But why is it that so many women in the sector are not being supported in their careers – and why, in some cases, is it so hard for women to even enter the workforce?

From various research, including some conducted recently by Professor Tom Baum from the University of Strathclyde, we know that women make up close to 70% of the total global workforce in the hospitality and tourism sector. However, they hold less than 40% of all managerial and supervisory positions, hold less than 20% of general management roles, and make up only between 5% and 8% of corporate board members of publicly-quoted hospitality businesses.

To tackle these gender gaps, CARE has been working since 2012 in partnership with Diageo, as part of the company’s Plan W initiative – a long-term commitment by their business to empower women across Asia Pacific through training-based programmes.

Teaming up initially with the Jetwing Hotel Group, CARE and Diageo are providing hospitality skills training for young adults at a local community level, with an emphasis on simultaneously growing the talent pool and actively encouraging the inclusion of women into the hospitality industry. Students are trained in the different disciplines of restaurant service: cooking; front office; housekeeping; as well as learning the English language and communication-based skills. Since the launch of this particular programme, additional industry partners have come on board, including Aitken Spence Hotels and Cinnamon Hotels, as well as new funding investments from the HSBC Future First Programme and the John Keells Foundation.

Changing the perceptions of women’s participation

The female participation rate of 33% on our courses is a marked increase from actual female representation in skilled jobs in the industry, and a higher proportion than the national female labour force of 28%. It’s not enough, but these statistics stand as a positive initial development in a sector which currently fails to attract women into such roles, due to the negative reputation of the industry, and cultural norms and perceptions of appropriate employment for women.

In order to bring about what equates to an encouraging take-up of women on these courses, the partners involved spent time at the design stage actively involving community leaders and government bodies to change perceptions of female participation in the industry. Amongst some of the results of this were that a grievance redress mechanism was put in place, and students were also encouraged to work in less traditional ‘female roles’ in the hotel – an important initiative to enable progression to leadership positions.

This week, in advance of International Women’s Day, Diageo is convening an event in Hong Kong on 5th March, the ‘Women in Tourism and Hospitality (WITH) Forum’, as part of their establishment of a WITH Coalition – a complementary group of cross-sector organisations, each of whom believes the current status quo of unequal rights and representation of women in the sector needs to be re-framed.

Whilst women take on over 70% of all work in the informal hospitality sector on the one hand, on the other, as owners of hospitality businesses, and owners of hotels worldwide, women make up less than 20% and 10%, respectively. These figures are not simply unbalanced, but they are failing to capitalise on the talents of hundreds of millions of undervalued and underrepresented women – in Sri Lanka, and beyond.

A paper on ‘Women in Tourism and Hospitality: Unlocking the Potential in the Talent Pool’ will be launched at this week’s event. Co-authored by the WITH Coalition members, it provides recommendations for governments and public sector agencies, for education providers, the private sector, and for civil society more broadly.

Some of these recommendations will propose the removal of practical obstacles to female participation in the hospitality workplace, others will support more suitable childcare provision to enable employees (both male and female) to remain within their workforce. More generally, the paper will call for robust dialogue between hospitality enterprises, trade unions, national governments and other key players, such as civil society.

Full commitment by all sectors

This last point is crucial: training courses, regulatory adjustments, and other ‘interventions’ can bring about positive outcomes but, ultimately, a full commitment by all sectors to collaborate over the long term, and to advocate joint investment and improvements on a number of levels, will be what truly stands as the winning formula for sustainable and equitable change to the current paradigm.

That every sector seems awakened to the business case for investing much more aggressively in this agenda – whether to bring about positive outcomes for government, for industry, or for women as a whole in society – is both a sign of the times, but also a sign that we must not ignore, just because we might assume that it will be dealt with by others.

This agenda is for everyone, without exception.

And if positive advances are made, not just in the hospitality and tourism sector but elsewhere too, it will be the defining agenda for our generation.