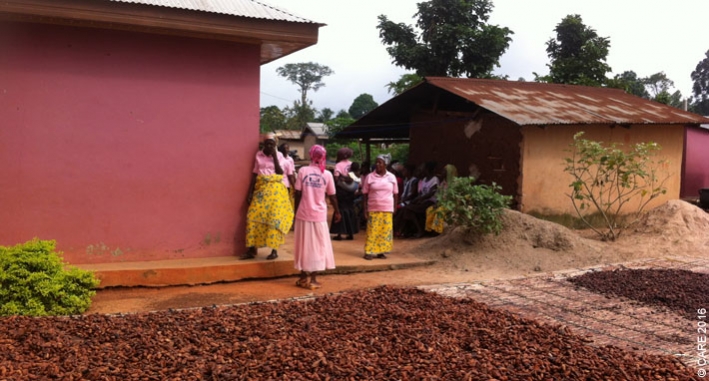 Women are very important stakeholders for the whole cocoa industry – not just as customers and consumers, but also because of their roles as cocoa producers. Although cocoa is seen as a “male crop” in most of the producing countries, women have a key role in activities that are critical for the volume and quality of the production. Nevertheless, the “invisibility” of women has serious consequences for their access to technical training and productive resources in general, which is unjust and also represents a huge inefficiency in business terms.

Following pioneering work by Stephanie Barrientos in 2008, Cadbury (which later became part of Mondelēz International) realised the importance of gender equality in its supply chain and in 2012 it designed the first version of a gender plan, which then evolved into a new more detailed version in 2014, and which is in the process of being continuously improved.

CARE has been working in partnership with Mondelēz International in the Cocoa Life programme since 2012 (and previously, since 2008, with Cadbury in the Cadbury Cocoa Partnership). The Cocoa Life programme aims to empower 200,000 cocoa farmers and reach one million community members in six key cocoa growing origins: Côte d’Ivoire, Ghana, Indonesia, India, the Dominican Republic and Brazil. Since the inception of the programme, CARE has supported the whole process of incorporating women’s economic empowerment, both from the standpoint of an implementing partner and from the standpoint of a strategic advisor. We helped shape the Gender Action plan in Côte d’Ivoire in 2014 and have just conducted a peer review process in Ghana and Côte d’Ivoire culminated in the Women’s leadership in Cocoa Life communities report, co-published by CARE and Mondelēz International.

In the peer review, we assessed Cocoa Life against key industry standards like the Women’s Empowerment Principles and the more recent report by the UN High Level Panel on Women’s Economic Empowerment. However, the main framework we used for the analysis was CARE’s Gender Equality Framework, which is designed to make sure that interventions have a truly transformative gender approach and to improve access and control over productive resources through:

According to the assessment, gender has been deeply embedded and made cross-cutting across most of Cocoa Life’s interventions and the programme has had a very positive influence over women’s agency, through strengthening women’s skills in agriculture, financial literacy, leadership skills, and at the same time providing women with platforms to exercise their leadership in community-level governance committees and in cooperative societies.

Cocoa Life is also starting to influence social norms in gender relations through promoting new role models for men, women and youth that challenge the gender-based division of labour and traditional gender roles in general.

This is done through a variety of tools and methodologies at the household level, at the community level, at the private sector partners’ level, and influencing at the public sector level:

While these interventions have been effective, according to the assessment more needs to be done to address the root causes of gender inequality, at the relations level inside the household and at the more structural policy level. While the gender-based division of labour is starting to be challenged and new role models for women are emerging through their new leadership positions, time poverty continues to be a huge issue. Although awareness of the issue is growing, challenges remain in terms of decreasing and redistributing the work load. Better awareness also exists around gender-based violence, but more strategic actions need to be implemented. More research is needed around the actual influence and control that women have in leadership positions and also inside the household. More research also needs to be done around women’s paid labour and the pay gap. The issue of access to land continues to be a major barrier for women and needs to be tackled at the highest advocacy level.

CARE believes that partnering with a leading company in the food industry like Mondelēz around women’s economic empowerment has the potential to bring about large-scale changes for vulnerable women in the agriculture sector across the world. Although it is a long journey, full of challenges and learning opportunities along the way, achieving that should become an asset for the whole industry – not only for Mondelēz.

More in this category: « Dignified Work – What is it? And why is it crucial for women’s economic empowerment? Cocoa Life: Can complex development be explained on a bar of chocolate? »