Five ways to turn around the debate on migration 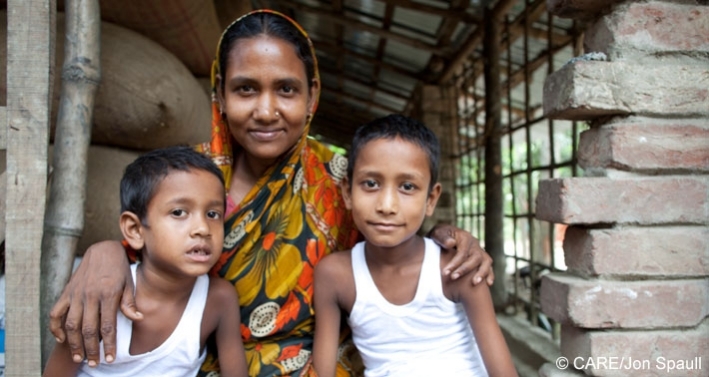 Nargis Pavin, who worked in a factory in India, with two of her children in Botospur, Bangladesh © CARE/Jon Spaull

CARE's conference on Women, Migration and Development (July 2014), organised in partnership with the Overseas Development Institute, examined the extent to which migrants the world over suffer stigma and discrimination. The conference included a session on the media and its role and responsibility in shaping policy and opinion on migration. Delegates discussed the way in which negative portrayal of migrants in the media contributes significantly to reinforcing prejudices and presents a big obstacle to challenging negative attitudes and stereotyping around migration.

1. Get the facts right

Yasmin Alibhai-Brown: Part of the anti-migrant hysteria stems from the awful lie that it is only now we are so intolerant about migrants because there are so many of them. If we look over newspapers from the 1970s we would see much the same headlines and sense of panic. The difference between then and now is that public opinion was with refugees and migrants then. Not so now.

Awale Olad: The fear surrounding migration far outweighs the reality. It is rarely reported that the majority of foreigners who move to the UK are students, while spouses and children who have British relatives are a close second. Civil society organisations such as CARE and others need to present policy-makers and the public with a measured but assertive rights- and evidence-based approach.

YA-B: The media is hugely influential in framing public opinion. But it is also accountable to and dependent on the public's ratings. The BBC is ours. We must keep writing to the BBC because it is compelled by law to listen and respond. We should be more assertive in responding to the media if something is portrayed inaccurately or distortedly. This is a power that we are not using. We can help direct the media agenda.

AO: Social media gives us a fair ground to fight from. It is a fantastic platform and we must unlock its potential.

3. Engage the public with a positive campaign

AO: Last year, Migrants' Rights Network achieved a major success in raising the profile of migrants' rights in Britain and engaging the public in a positive way. The organisation launched a report following the Parliamentary inquiry into new family regulation rules which state that you have to earn £18,600 a year to bring a spouse into the country. This caught everyone's attention. People were outraged that the government was effectively saying that you can't fall in love with a foreigner if you earn £18,599, which includes as much as 40% of the British public. Suddenly people saw the situation in a very different light.

The campaign received incredible media coverage and support from the Daily Mail to The Guardian. It also enjoyed cross-party support in both Houses in Parliament and initiated three parliamentary debates.

YA-B: When people write to me saying how much they hate immigrants, I give them a task: write down how many foreigners you interact with on one day and whether you feel this hatred during any of your interactions? I received astonishing results. There is a great difference between what people think of migrants versus what their real experience of them is. It can't be true that we hate them because we all live here and our everyday experiences are not filled with hate.

AO: When the media reports on migration, they refer to numbers, not people, and migrants themselves are rarely given a voice. To shift the negative attitudes towards migration, we must provide a sober evidence-based counter narrative that includes stories of real people.

The word 'ex-pat' provokes a very different reaction from the word 'migrant'. Do we have to start using different language?

AO: Using the word 'illegal' to describe an undocumented migrant is against UN and EU guidelines. Associated Press have changed their guidelines but other big names such as the BBC and The New York Times – who are seen by the public as standard setters – insist on using the word 'illegal'. The correct words would be 'irregular' or 'undocumented', but these words do not capture the public's attention. 'Illegal' does.

YA-B: During the anti-racist/pro-migration movement in the 1980s, people used to say: "Don't call me an immigrant; that's racist." But, in hindsight, that was probably wrong; it suggested migration was a negative thing when we should be proud. We should reclaim the word, not come up with another one. I call myself 'migrant' in every walk of life now. We should do that. It would get its nobility back.

More in this category: « Gender-based violence: a global epidemic requiring committed and effective action While the civilian death toll inside Syria equates to over 26 Srebrenicas, the EU constructs a Fortress Europe »