Home // Development Blog // Inside conflict: What does research reveal about women’s rights and changing gender roles in Yemen?

Inside conflict: What does research reveal about women’s rights and changing gender roles in Yemen? 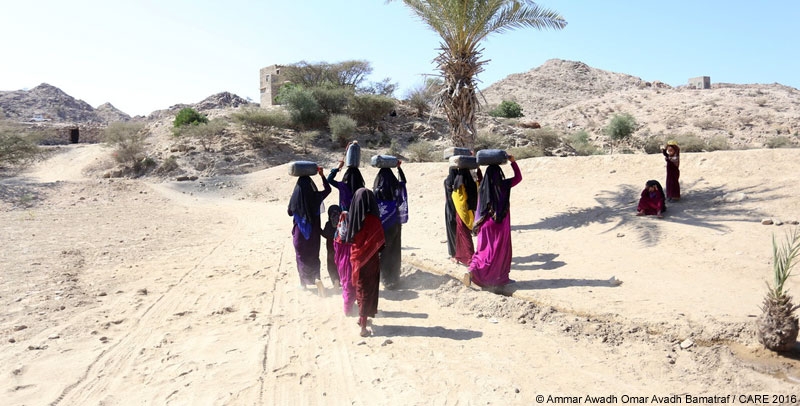 Women in Lahj, Yemen, carrying water they collected from a CARE water point

Until the acceleration of violence in 2015, women in Yemen were making some headway in challenging a system that largely excludes them from public life. But since 2015, war has impacted not only on their security and health, but also on the political spaces in which they can negotiate for empowerment. And as movement towards greater equality slow down, so too does the better protection from violence which accompanies it. So how can we break this vicious downward cycle?

War targets everyone – whether you are a man or woman, girl or boy, life in Yemen is tough. But while air strikes and cholera do not discriminate by sex, your gender can determine other ways in which your life is threatened. As a man you are at greater risk of forced recruitment into an armed group or being killed while fighting. As a woman you are more likely to suffer rape, domestic violence, early marriage, kidnap, denial of resources, or having your movements restricted – life-threatening in itself if you or your children are starving.

Given this complexity, it is crucial for Yemenis and those seeking to support them to understand how conflict interacts with women and men differently so that humanitarian and longer term programming is not only gender responsive, but also transformative. That’s why CARE International and the Department for International Development (DFID) co-hosted an event in July, Moving forward: Gender sensitivity and transformation in Yemen. The event aimed to identify potential approaches that could be applied to Yemen, with wider learnings for other fragile and conflict-affected contexts.

A good starting point is to look at the existing evidence. What does the research say? Four recent reports examining the different experiences of women and men in Yemen’s conflict, including changing gender roles and the impact on women’s rights, provide crucial insights for anyone looking to design more gender sensitive programming.

From the ground up: Gender and conflict analysis in Yemen, a study by CARE, GenCap and Oxfam, identifies changes in gender roles and relationships since conflict escalation in March 2015. Based on over 500 household interviews, scores of focus groups and in-depth interviews with leaders and activists, the study documents both negative impacts on women’s rights such as the closure of political space, but also positive shifts in gender norms with potential opportunities for longer term transformation of gender roles.

As women have stepped into roles traditionally occupied only by men, often linked to livelihoods, female economic empowerment has been not only a necessity and consequence of crisis, but also a vehicle for change (read more from CARE on ‘resilient markets’ in fragile contexts). Nevertheless, Yemeni women are running households under extreme stress, including economic. With basic services crippled and livelihood chances shrunken, women become more vulnerable to exploitation and gender-based violence both within and outside the home.

The status of women’s rights should not be assessed only in relation to the crisis itself, but also the humanitarian response to it. As violence has intensified in Yemen and state services near collapse, the prioritisation of donor funding for ‘life-saving’ responses has come at a cost to longer-term and stand-alone gender justice work, as noted in a report by Oxfam and International Alert funded by the FCO, Now is the time: Research on gender justice, conflict and fragility in the Middle East and North Africa.

Looking at Yemen and beyond, the report cautions that losing focus on gender equality hobbles efforts to reduce violence against women now and in the future (begging the question: is it time for a rethink on the definition of ‘life-saving’?).

Humanitarian interventions should be instead treated as an opportunity for gender justice, ensuring women’s meaningful participation throughout the design and delivery of programmes. Indeed, this was a World Humanitarian Summit commitment. Women’s full engagement has been documented to not only improve interventions but also positive democratic outcomes in fragile settings.

Commitments are laudable but actions more so. This report demonstrates that if humanitarians are to achieve truly gender- and conflict-sensitive interventions they must be informed by gender and conflict analyses, laborious though these can often feel for stretched humanitarian teams. Here, donors can help by recognising the additional capacity required.

3. Promoting women’s participation at all levels

Once participation of women at the local level is compromised as it is in Yemen, so too is engagement at national and international levels. In Yemen, this excludes women from the peace process and silences them from shaping Yemen’s future as shown in Saferworld and Oxfam’s We won’t wait: As war ravages Yemen its women strive to build peace. Without greater support, argue the authors, for Yemeni women’s organisations including those engaged in local-level peacebuilding, violation of women’s rights will be further entrenched.

In my blog on women’s political participation in Somalia, women from civil society and diaspora groups make the same point. Support, therefore, must be holistic – financial, political, diplomatic and inclusive of protection mechanisms to manage risks caused by activists’ increased visibility.

Yet ‘women’, it still requires emphasising, are not a homogenous group as illustrated in a report by Saferworld, CARPO and YPC. Their experiences of conflict in Yemen are not only different to those of men, but also to those of each other. The report “Women nowadays do anything”: Women’s role in conflict peace and security in Yemen outlines the gap between perception and reality regarding women’s participation in both conflict and peacebuilding.

In some areas, women’s perceptions of their own contributions to peace have included supporting fighters in providing food, nursing the wounded, smuggling weapons and even, in a small number of cases, taking up arms. Simultaneously, women are contributing to community cohesion in diverse ways (not least at the family level) through psychosocial support, civil life and humanitarian work. Understanding these granular differences in experience is vital for nuanced, gender sensitive approaches which create opportunities for change.

The 30 attendees at the CARE and DFID event, Moving forward: Gender sensitivity and transformation in Yemen, included representatives from Yemeni women-led organisations and Yemeni INGO staff, DFID advisors, the Foreign and Commonwealth Office, OCHA, and authors of the reports highlighted above from Oxfam, Saferworld, International Alert and CARE Yemen. Participants linked in from Sanaa, Riyadh, Amman, Beirut, Geneva and Tunisia to debate live with their counterparts in London.

Billed as a ‘working session’, participants were asked to identify opportunities for advancing gender sensitivity and transformation across three areas – research gaps, required policy shifts and programming. Before breaking into idea-generating groups, a Yemeni female activist from Sanaa (name withheld for her safety) gave a personal account of the challenges for Yemenis working on women’s rights. The risks her colleagues face, including arrest, highlight the need for governments, particularly donors, to increase protection for women working on gender justice.

In my forthcoming blog, What next for women, peace and security in Yemen?, I’ll outline some of the ideas for research, policy shifts and programming proposed at the CARE and DFID event.

Suzy Madigan is CARE International UK’s Senior Humanitarian Advisor specialising in Gender and Protection and regularly deploys to emergencies worldwide to support CARE teams. As part of the Emergency Team deployed to the Beirut Explosion and Covid-19 response she led on the Beirut Rapid Gender Analysis for CARE. She’s currently acting as Regional Gender in Emergencies and Protection Advisor for Middle East, North Africa and the Caucasus.

Recent fieldwork includes support to DRC and South Sudan refugee operations in Uganda; operational recommendations for gender and conflict dynamics in cyclone-hit Mozambique, and research into women’s economic empowerment in fragile and conflict-affected settings such as Syria, OPT and Niger. She was previously an advisor within CARE’s Policy and Advocacy Team on humanitarian and conflict issues.

Prior to joining CARE, she worked in programming for the United Nations and NGOs. She led a protection response in Northern Iraq within the combined Syrian refugee and Islamic State crisis, and has worked on gang violence with the UN Stabilization Mission in Haiti; the reintegration of armed groups including the FARC and paramilitaries in Colombia with the Colombian Government, and reconciliation among ethnic groups in Bosnia-Herzegovina.

She has written for The Independent, Huffington Post, Overseas Development Institute and Thomson Reuters.

More in this category: « The Centre for Global Disaster Protection must go beyond a focus on finance One step back, two steps forward: CARE’s journey towards doing development differently »