#StillMarching - Making 2018 a year of change 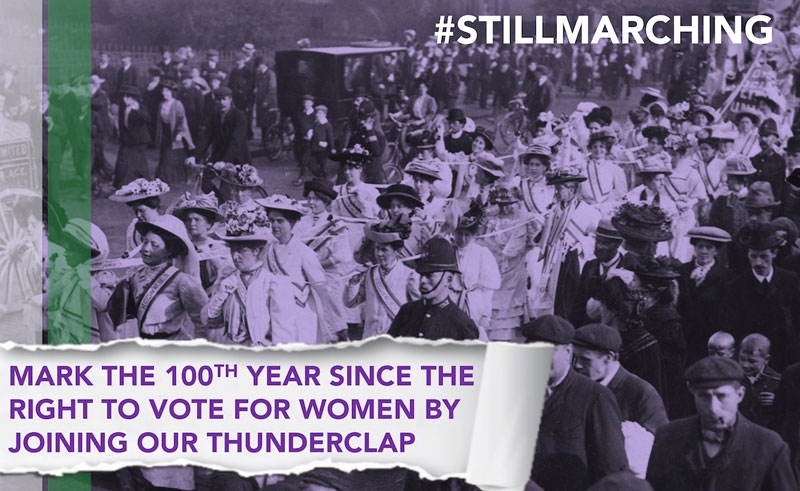 2018 marks 100 years since the first women (and only some of them) were legally allowed to vote in the UK. The year is full of opportunities to look back at how far the UK has come in women’s political participation – but with women making up barely a third of MPs, the answer is still ‘not far enough yet!’ That’s why CARE has helped to set up the Centenary Action Group.

The Centenary Action Group brings together over 70 women’s organisations, political parties, key individuals and action groups to campaign for the Centenary to help deliver real change for women in the UK and worldwide:

Established by Helen Pankhurst and CARE International UK, the campaign group have come together to say that even though we got the vote 100 years ago, we are #StillMarching in the UK and around the world for women’s right to take part in the decisions that affect their lives free from harassment and abuse. The group includes Electoral Reform Society, Fawcett Society, Muslim Women’s Network, Women for Refugee Women, WeAreTheCity, Girl Guides, 50:50 Parliament, Women’s Institute, Women2Win, Labour Women’s Network, Green Party, Women’s Equality Party, Oxfam, Action Aid, Womankind and many, many more.

The need for action

The UK Parliament currently ranks 38th in the world for women’s representation with only 32% of MPs women. A global study carried out by the Inter-Parliamentary Union in 2016 found 82% of female MPs worldwide had experienced some form of psychological violence. Among them, some 44% said they had received threats of death, rape, beatings or abduction during their parliamentary terms. Online abuse in the UK disproportionately affects Black, Asian and Minority Ethnic (BAME) women MPs. The suffrage centenary is an opportunity to change this, and to increase women’s political participation and address barriers to women’s leadership by securing concrete policy changes when it comes to achieving gender justice at home and abroad. The Centenary Action Group want to make the 2018 centenary of the first women’s votes in the UK a year for change.

Opportunities to get involved

The first moment for joint action will be the Centenary Action Group’s Twitter/Facebook thunderclap at 8pm on Tuesday 6 February. Sign up now to support the thunderclap.

Helen Pankhurst’s new book Deeds not words: The story of women’s rights, then and now will also be launched on 6 February.

Other activities taking place over the coming months include CARE International UK’s annual #March4Women on Sunday 4 March. #March4Women will call for an end to gender-based discrimination and violence in the workplace, around the world. The event will feature a celebratory march and rally in central London, ending with speeches, music, entertainment and inspiration at Trafalgar Square. Sign up now to join the #March4Women.

Women For Refugee Women are also carrying out a mass lobby of Parliament on Thursday 8 March: #AllWomenCount, asking Parliamentarians to listen to the voices of refugee and migrant women, and to support their rights to safety, dignity, and liberty.

Oxfam are having their third annual Women Stand Up in Leicester Square Theatre on Thursday 8 March and throughout International Women’s Day week will have a Gender Pay-Gap Sale on their online shop.

And on Saturday 10 March, the Million Women Rise will take place.

To keep up to date with all of the exciting events hosted by Centenary Action Group members see our online calendar.

Ultimately, the aim of the Centenary Action group is to ensure that the suffrage centenary in 2018 isn’t just a lot of old photos and history programmes – but instead delivers a lasting legacy that can help deliver a step change in women’s rights in the UK and women’s political engagement.

Please join the Centenary Action Group’s thunderclap at 8pm on Tuesday 6 February to share why you are #StillMarching and to help make 2018 – the year of the suffrage centenary – a year of change.

I am Campaign Manager for the Centenary Action Group, a cross-party campaigning coalition convened by Helen Pankhurst and CARE International UK.

I am motivated by injustice and the potential for change. I am inspired by strong and powerful women on a daily basis, but find it impossible to not be infuriated by the disproportionate impact so many issues have on women. This fury fuels an intense passion for gender justice and inspires me to fight against the systemic and structural issues that perpetuate gender inequality.

The Centenary Action Group represents over 100 activists, politicians and women’s rights organisations who have come together to mark the 2018 centenary of the first women’s votes in the UK, and to use the centenary of some women getting the vote to highlight what we are #StillMarching for in the UK and worldwide, including:

As Campaign Manager, I am responsible for the development, coordination and delivery of the coalition’s campaign objectives and strategy. I previously worked in policy with the UK and Scottish Governments and am currently completing a MSc in Gender, Development and Globalisation at the London School of Economics and Political Science.

More in this category: « 2018 development prediction: 4 ways to make sure the future is feminist – from London to Yemen Suffering in silence: The 70 million people you might have never heard of »