By the numbers (Part 1): Comparing financial inclusion and savings habits in Kenya, Malawi and Zimbabwe 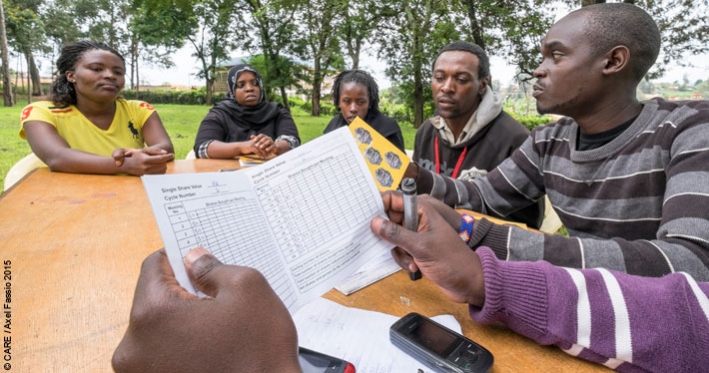 Members of the Tusoy Youth Group savings and loan association in Embu, Kenya

As mentioned in my previous blog about savings groups in Tanzania, there are massive amounts of capital circulating informally in East Africa. CARE has pointed out time and time again that serving this market is a social and economic win-win for providers and clients, but the persisting geographic, educational and affordability challenges continue to deter providers from making a long-term investment in the lowest-income market. Could an analysis of the size of the market opportunity help to change their minds?

In this blog, Access Africa, CARE’s Tanzania-based financial inclusion initiative, presents a rough market size estimate of informal savings groups for Kenya, Malawi and Zimbabwe, so that service providers, governments and citizens can be more informed on the massive economic potential held within these informal groups – and better understand the needs of the poor, the economic potential they informally possess, and the key role that financial service providers can play in bringing economic security and empowerment to millions of their poorest fellow citizens.

All of the following statistics are from the World Bank’s Global Financial Inclusion Index (FINDEX), using their most recent census results from 2014. The statistics also refer only to adult populations, defined as people age 15 and older.

The total adult populations for Kenya, Malawi and Zimbabwe are as follows. Keep these in mind, as they set the context for the charts and figures that follow.

One of the most common ways to calculate financial inclusion is by analysing the proportion of adults with bank accounts. Using this method, the states of inclusion for Kenya, Malawi and Zimbabwe, as a percentage of adult population, are as follows:

Although bank account ownership is a common way to measure financial inclusion, it is far from a perfect reflection of how rural East and Southern Africans manage their money. As the next section shows, large discrepancies between account ownership and account usage exist in all three of the example countries.

The columns on the left indicate the proportion of adults with bank accounts, while the columns on the right reveal the percentage of adults that actually save their money at a financial institution. The differences are stark: of the total adult populations, those saving at a bank are only 30.2%, 7.1% and 5.2%, as shown in the right-hand bars above.

Put another way, only 55% (Kenya), 44% (Malawi) and 30% (Zimbabwe) of adult savers with bank accounts in these countries use them to store funds.

How have these figures on bank account saving changed since the previous census in 2011? For Kenya, this figure has increased by 7%. In Malawi, this has decreased by 1%. In Zimbabwe, the figure dropped significantly – from 17.3% down to 5.2%.

This begs the following question: if these people are not saving their money at the bank, where are they saving? Are they saving at all? The next chart sheds some light on this mystery – and reveals a more popular method for storing funds for the future.

This chart reveals much about the savings habits of Kenyans, Malawians and Zimbabweans – both what they are and aren’t doing with their savings.

The teal bars indicate what percentage of adults have saved in the past year. All general savings figures have increased significantly since the 2011 census results, rising 36% over the three years in Kenya, 27% in Malawi and 12% in Zimbabwe. The gap between the tip of the teal bars and the 100% marker of the chart indicates the proportion of those estimated not to have saved money at all – nearly half (48%) of the population in Zimbabwe, 40% in Malawi and 24% in Kenya.

Saving at the bank

The blue bars indicate the same figures as the previous chart: the proportion of adults saving at the bank. Note the large discrepancies between Kenya and the two smaller nations, where only tiny fractions of adults choose banks as the place to store their funds. Only in Kenya did this savings method proportion increase from the previous results collected in 2011; since 2011, formal financial saving has proportionally decreased in Malawi and Zimbabwe.

The middle bars, represented in the same colours as were used in previous charts, show the proportion of adults who are saving “using a savings club or a person outside the family”; as the bars reveal, this method of saving is more popular than formal banking in all three nations.

In each case, the proportional growth of this savings method significantly outgrew that of formal banking. If we assume that these trends have continued since 2014, we can consider all of the most recent figures as conservative estimates.

Large gaps still exist between those who claim to save and the two methods shown in the chart above. Detailed information on other methods is currently unavailable; however, it can be assumed that the use of mobile money accounts and simple saving methods in the home or amongst family members can collectively fill some of these gaps.

My next blog draws on these findings to estimate market sizes for informal group savings in Kenya, Malawi and Zimbabwe, and draw some conclusions for those interested in exploring the huge market potential of the unbanked and underserved in these (and other) countries. Read By the numbers (Part 2): Estimating market sizes for informal savings groups in Kenya, Malawi and Zimbabwe.

Nathan Randall was formerly a Financial Inclusion and Linkages Analyst for CARE Access Africa based in Dar es Salaam, Tanzania. He supported CARE’s efforts to link savings groups with banks in Kenya and Tanzania, collecting and analysing data from rural savings groups and financial services providers to evaluate linkage performance and help improve our models. Nathan holds a Bachelor’s Degree in International Business from Carleton University in Ottawa, Canada, and is a current participant in the Aga Khan Foundation of Canada’s International Youth Fellowship Program.

More in this category: « Size of the prize: Financial inclusion and the $380 billion revenue opportunity for banks By the numbers (Part 2): Estimating market sizes for informal group savings in Kenya, Malawi and Zimbabwe »