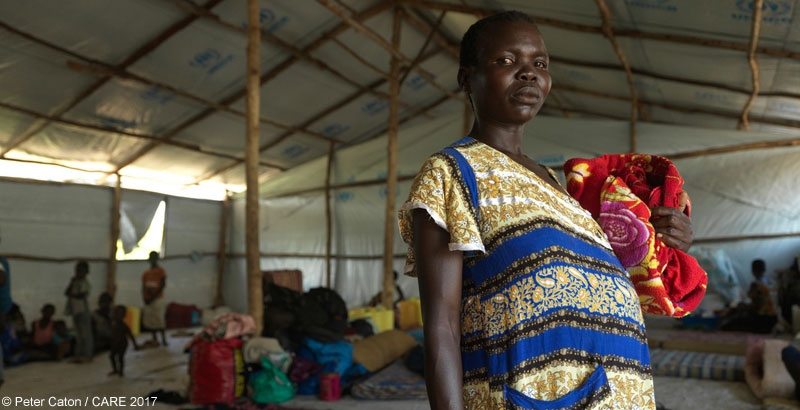 Esther, 21 and pregnant, walked for two weeks to Uganda after an attack on her village in South Sudan

On 11 July, the international Family Planning Summit will be held in London, hosted by the UK Department for International Development (DFID), the Bill & Melinda Gates Foundation, and UNFPA. One of the Summit’s four priority areas is on reaching the ‘hardest to reach’, including women and girls in humanitarian settings. But why is family planning in emergencies so crucial, and how can it be truly life-saving?

Emergencies, such as armed conflict, political unrest, and natural disasters, significantly increase the vulnerability of women and girls and create barriers to accessing sexual and reproductive health (SRH) services, which may already be limited to start with. SRH services enable women and girls to control when and how many children to have, which means they can enjoy the family size they want and avoid life-threatening complications of pregnancy and childbirth.

Family planning during emergencies therefore saves lives – just like clean water, shelter and food. CARE estimates that in Chad, one-third of all maternal deaths would disappear if all women who needed contraception simply had access to it.

Developing countries are already home to 99 percent of the 287,000 women who die annually during pregnancy and delivery. Maternal health complications are a leading cause of death for adolescent girls under 15 years of age in developing countries, at 15 percent, highlighting the already dire situation for women and girls in developing countries. An estimated 225 million women have an unmet need for modern contraception, meaning they want to avoid pregnancy but are not using a contraceptive method. 73 percent of these 225 million women with unmet need live in the world’s poorest countries, with the majority living in Asia and sub-Saharan Africa. Add armed conflict or a natural disaster to the mix and you have a critical need for SRH services.

According to UNFPA, 61 percent of preventable maternal deaths take place in countries affected by humanitarian crisis or fragile conditions. Last year, OCHA estimated that 507 women and adolescent girls died every single day from pregnancy and childbirth complications in emergency settings.

Emergencies force people to flee their homes and become internally displaced persons (IDPs) or refugees for an indefinite period of time. Approximately four percent of the total refugee population may be pregnant – which means that out of a population of 100,000 people, 4,000 women will be pregnant in one year. Out of these 4,000 pregnancies, approximately 15 percent will end in a serious, potentially life-threatening complication.

To indicate the sheer scale of this problem, at the end of 2015 over 65 million people were displaced globally. This means that approximately 390,000 women and girls could be seriously affected and that, without the choice to prevent pregnancy, many refugee women and girls will find themselves troubled with more mouths to feed in conditions where necessities are already scarce. As a result, the Family Planning Summit must prioritise refugees and countries experiencing humanitarian crises, as argued in a recent article by Rita Nehme at the International Rescue Committee.

Sex and pregnancy does not stop during emergencies

The reality is that, even in dire crisis situations, sex continues. This means that pregnancies, the spread of sexually transmitted infections (STIs), and other complications, continue to occur. The desire to prevent pregnancies also continues, and may well increase, as does the existing unmet need.

As well as consensual sex, it is also important to acknowledge that sexual and gender-based violence often becomes rife in conflict and post-conflict situations, and is commonly used as a weapon or tactic of war – as occurred in 36 conflicts in the first decade of this century. In South Sudan, for instance, there are several accounts of rape on a weekly basis and in Iraq and Syria, women and girls as young as nine have been routinely abducted and raped, sold, and forced into marriage.

Women and girls have little or no access to SRH services

Women and girls in emergencies inevitably find themselves with little or no access to sexual, reproductive and maternal health services. This heightens their vulnerability to unplanned or unwanted pregnancies, HIV infection, early or forced marriage, and maternal disability and mortality. In crisis situations, it is the breakdown of existing health systems which can cause a dramatic rise in deaths due to complications that would be easily treatable under stable conditions.

In South Sudan, there is only one qualified midwife per 39,000 people. This is compared to the UK’s 8.8 nurses and midwives per 1,000 people. Similarly, a midwife in Syria explained to UNFPA that an exodus of qualified midwives and reproductive health professionals has meant that non-licensed midwives have been practicing without supervision, with serious consequences for their patients.

Without access to a comprehensive package of family planning, including high-quality safe abortion and post-abortion care (PAC), women in emergencies may be forced to perform self-induced abortion or rely on unskilled providers in unhygienic conditions. UNFPA estimates that 25 to 50 percent of maternal deaths in refugee settings are due to complications of unsafe abortion.

Increase in early and forced marriage

In humanitarian crises, early and forced marriage rates increase. In some conflicts, women and girls are abducted and sold into marriage. In other contexts, families turn to child marriage as a way to generate income or as a preventive measure to protect girls from violence. A recent study by UNFPA and the American University of Beirut revealed an alarming rise in child marriages, with two out of five Syrian refugee girls in Bekaa, Lebanon, being married by the time they are 17 years old.

Estimates suggest that child marriage rates are four times higher among Syrian refugees today than among Syrians before the crisis, indicating that the rise has been driven predominantly by conflict and displacement. Early motherhood often quickly ensues: 61 percent of married 15-to-17-year-old girls reported having been pregnant at least once. Efforts to ensure that young married and unmarried people can access SRH services, as well as tackling early and forced marriage, are even more of a priority issue in crisis settings.

SRH in emergencies is feasible

CARE not only recognises that access to family planning information and services in emergency contexts is necessary and saves lives, but has also has proven that it is feasible to provide family planning in even the most challenging of contexts. As part of its global strategy, CARE has prioritised responding to humanitarian crises with SRH as a critical component. CARE’s Supporting Access to Family Planning and Post-Abortion Care (SAFPAC) project integrates essential sexual and reproductive health services into new and ongoing humanitarian emergencies, emphasising access to family planning and post-abortion care. CARE has provided SRH assistance in emergencies in Chad, Democratic Republic of the Congo (DRC), Pakistan, Djibouti, Mali, Nepal, South Sudan and Syria.

As part of the SAFPAC initiative, CARE has seen remarkable uptake of Long Acting Reversible Contraceptive (LARC) use in Chad and DRC. Before the initiative, LARCs were either unknown or unavailable in the intervention areas. Yet, as soon as trained providers were in place, there was a dramatic and sustained increase in new users of all contraceptive methods, especially implants. A total of 82,855 new clients were reached by the end of its fourth year, representing 32 percent of the estimated number of women of reproductive age in the respective catchment areas in both countries.

Despite being life-saving, reproductive health services remain drastically underfunded in emergency settings. This is why the Family Planning Summit provides such an important opportunity in emphasising both the crucial life-saving need, and feasibility, of SRH in emergencies – and ultimately to encourage further funding and commitments. In order to achieve the Summit organisers’ shared goal of empowering 120 million additional women and girls to use modern contraception by 2020, we must mobilise political will to meet the SRH needs and rights of all people affected by crisis and conflict.

Rebecca was formerly a Policy & Advocacy Intern at CARE International UK, supporting the Policy and Advocacy team in research and advocacy on the themes of Gender in Emergencies: Protecting and Empowering Women in Conflict and Women’s Economic Empowerment and Financial Inclusion.

Rebecca has an MA (Distinction) in War Studies from Kings College, London, having previously studied BA History and Politics at the University of Exeter. She had previously worked at Waging Peace, a human rights organisation which campaigns against genocide in Sudan and, alongside its sister charity, supports Sudanese refugees in the UK.

More in this category: « How to avoid toolsplaining: Thinking differently about social accountability Monitoring and evaluation: How should we measure the relationship between cash transfers and disaster resilience? »